Join Our Newsletter
Shop Our Store
MAIN MENUMAIN MENU
By Matthew Maruster on May 10, 2018 in Safety, Survival, Training 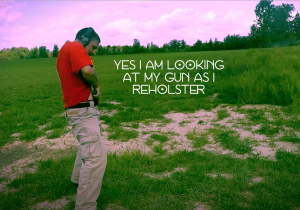 I am looking at my gun as I reholster. Is this wrong?

Tactics and techniques taught by self-defense shooting instructors vary greatly. One such topic is re-holstering, or better yet how and when to re-holster. My opinion on re-holstering is different than others. Agree or not, here is my take on re-holstering and the mindset that you should have when doing it.

I have heard many instructors tell their students You can't look down while re-holstering so you can keep your eyes on the threat.

When it comes to civilian concealed carriers, I think both of the statements are wrong. Why?

First, drawing and reholstering are arguably two times that lead to the majority of unintended or negligent discharges. We know drawing the firearm must be done with speed. We train this process over and over so that it becomes automatic and fluid. But re-holstering, what is the urgency to put the gun back into the holster?

As a civilian you're likely to draw your firearm as a last resort. Besides your hands, you are likely not carrying a lesser force option that you would transition to.

This is different from a law enforcement officer who may draw a firearm during a high-risk vehicle stop and then transition to a lesser force option like a taser or baton. As a cop, I trained so I could reholster without looking for this exact reason.

Second, reholstering as a concealed carrier is oftentimes done with an inside the waistband holster and under clothing. Plus, some holsters partially or completely collapse when the gun is removed. Sure you can get a stiff Kydex holster, which is preferable, but not everyone carries in a Kydex holster. So just the mechanical process of reholstering is more difficult when compared to an officer's outside the waistband holster that is not covered with a garment. 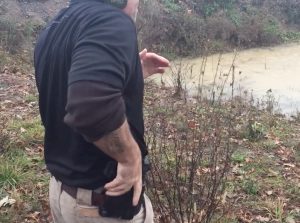 What's wrong with looking your gun back into the holster?

Why would we NOT want to look at the holster and ensure no clothing etc. get bunched in the holster or trigger guard?  After all, every so often someone shoots themselves and says something got caught in their holster and caused the gun to go off. Why not be deliberate in reholstering?

Some say, you can't look down because you have to keep your eye on the threat. Why would anyone train to re-holster their firearm when there is such an imminent threat that they can't look away? The fact is, you should NOT holster your firearm until the threat has been completely eliminated (and this doesn't have to be from shots being fired). Then you can re-holster and take all the time you need to do it safely. This can include looking down at your holster.

What about reholstering so the responding officers don't mistake you for a bad guy? It is a completely reasonable fear. A couple of thoughts to mitigate this fear:

If you are involved in a defensive gun use you should attempt to get in touch with law enforcement yourself or direct someone to do it for you. Give the dispatcher (and responding officers) your description and any updates to the situation. Even if officers are responding if the threat still exists, holstering your firearm does not make sense. Unless your fear of being shot by responding officers is greater than the threat that caused you to draw your weapon in the first place.

Additionally, during my time as an LEO, I responded to many “guy with a gun” or “someone shooting” calls. Never once did I respond thinking that if I saw anyone with a gun I would immediately shoot them. Cops are trained to identify a person as a threat before shooting.

LEO's routinely work with plainclothes officers and know there are off-duty officers or armed civilians who may be involved in an incident. Just seeing a person with a gun is not a green light to shoot. Simply do not do things that make you appear as a threat. But, if the threat is completely eliminated or has left the scene, reholstering your firearm before police arrive is fine. But again, what would be the harm in looking it back into the holster? 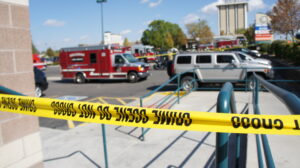 Being mistaken as a bad guy by police is a reason some say you must be able to reholster quickly.

If on the scene of a shooting and waiting for officers to arrive you can use the Sul or high ready position. This allows you to control the firearm and not appear threatening. Verbal notification is a good thing as well. Announce that you are a concealed carrier to anyone nearby and responding officers. Try to remain on the line with dispatch until officers arrive. If appropriate advise dispatch that you feel there is still a threat and you do not want to holster your firearm until officers arrive on the scene.

But I can reholster without looking:

No doubt after hours of practicing your draw, you will be able to reholster without looking. This will come from your hand knowing where it went to draw the firearm and know where it needs to go to return it to the holster. Hours of dry-fire reholstering without looking will perfect this skill.

This isn't a bad thing, in fact, it shows that you have been building a good a consistent technique. So kudos for putting in the work. But also ensure that part of that reholstering process doesn't involve the gun searching its way back into the holster. What I have seen on many occasions is a person flags their own body as they use the muzzle to seek out the holster. Not a good thing. 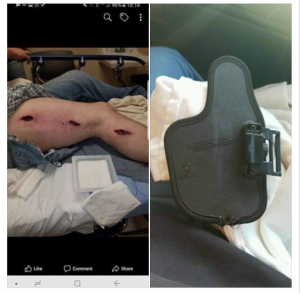 Apparently, this gun ‘just went off' when reholstering. I wasn't there, but if it was an obstruction that caused this gun to discharge, looking at the gun go into the holster may have prevented it.

But unless you are an LEO or similar, having to holster the gun without looking is not a necessary skill. I would go a step further and say that regardless if you can do it without looking or not, looking the gun back into the holster is just plain safer. I am not ashamed to say when I reholster, I do it deliberately and look it into the holster, ensuring nothing got in the way. I also haven't had a reason to rush my re-holstering as a civilian concealed carrier. It may not make me look sexy or high-speed, but I don't train with that in mind.

So here's the gist:

Check out this study we did on 300 negligent discharges.

Episode 223: NRA Show Wrap-up & Springfield Separates From Dick’s
How To Get A Proper Gun Grip To Increase Your Skill

11 Responses to My Controversial Stance On Re-holstering