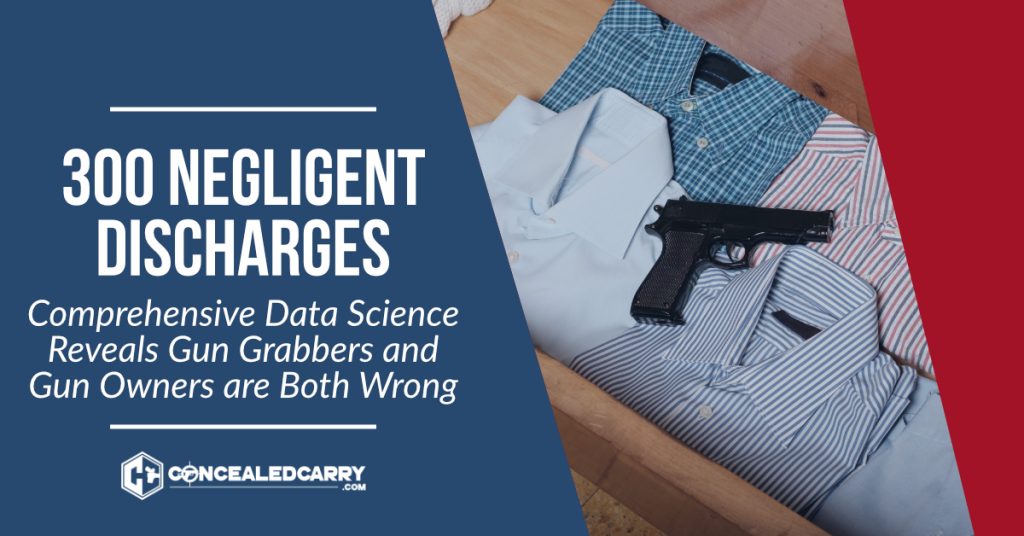 Our team undertook a massive study about one of the most dangerous and, unfortunately, common issues that face firearm carriers—the subject of negligent or accidental discharges.

Now, negligent discharge is not always the jargon used when discussing this issue. More than likely, you have heard this issue referred to as “accidental discharge.”  However, I don't think this is the best way to describe incidents like these. After reading through 300 different news stories about these discharges, one thing has become clear. In all of the articles that we went through, these discharges WOULD NOT have happened if those handling the firearms followed proper gun safety protocols.

The Scope of the Study

In the study, we researched 24 months from December 2014 to November 2016 and ONLY included stories in which someone was injured or killed, and unfortunately, these tragic stories were not that hard to find. I initially tasked our research team with finding 100 stories. It didn't take long.

So I asked how many more they could find. In the end, we had a list of 300 unique news stories. Sadly I'm confident that the actual number of incidents is much higher, given that so many negligent discharges don't land in the local news.

The individual stories are extreme, and reading all 300 of them changed my life. Some are just tragic accidents that probably happened to decent gun owners who just made a mistake. Others are discharges that occurred to criminals while they were committing crimes. Some stories feature cops, some kids, some parents, and even one story where the dog did it.

Below are some of the key points and lessons I derived from the news stories. If you find this insightful or valuable, I encourage you to share this with friends. There are social share buttons above and below the article.  Also, there is the option to embed the full infographic at the bottom of this page.

THE PRICE OF NEGLIGENT DISCHARGES

When you usually think of a negligent discharge, you are likely picturing something that would occur at the gun range or in the woods while hunting. You may either laugh off or, at the worst, it scares the daylights out of you. But the statistics that we saw were instead downright tragic. 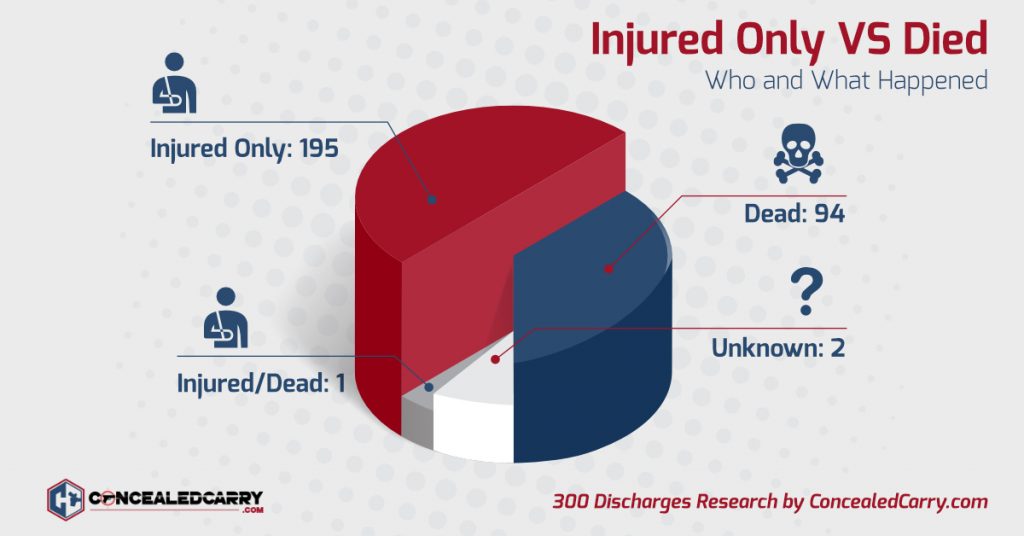 As you can see from the above graphic, the number of those discharges that ended in death equaled roughly one-third of the incidents we studied. It's hard to imagine someone you care about getting hurt or dying simply because of improper handling of a firearm, but it is a fact that it does happen and far too often. Modern medicine has done a lot; however, the death rates related to gun accidents, suicides, and attempted homicides have all dropped steadily over the last 50 years.

WHO GETS HURT IN NEGLIGENT DISCHARGE INCIDENTS?

Now you may be saying to yourself that you are not one of the people who mishandle a firearm. You follow all of the safety precautions with both handling your gun as well as storing it. There is no way you could have an accident like those we are speaking about here. However, just because you are safe doesn't mean that the danger is gone. We have found that it may be far from gone.

We found a significant number of injuries or deaths from these incidents occur to an innocent bystander—one who is nearby and not necessarily the person who was holding the firearm when it discharged.

Think about that the next time you walk into a public gun range filled with strangers. 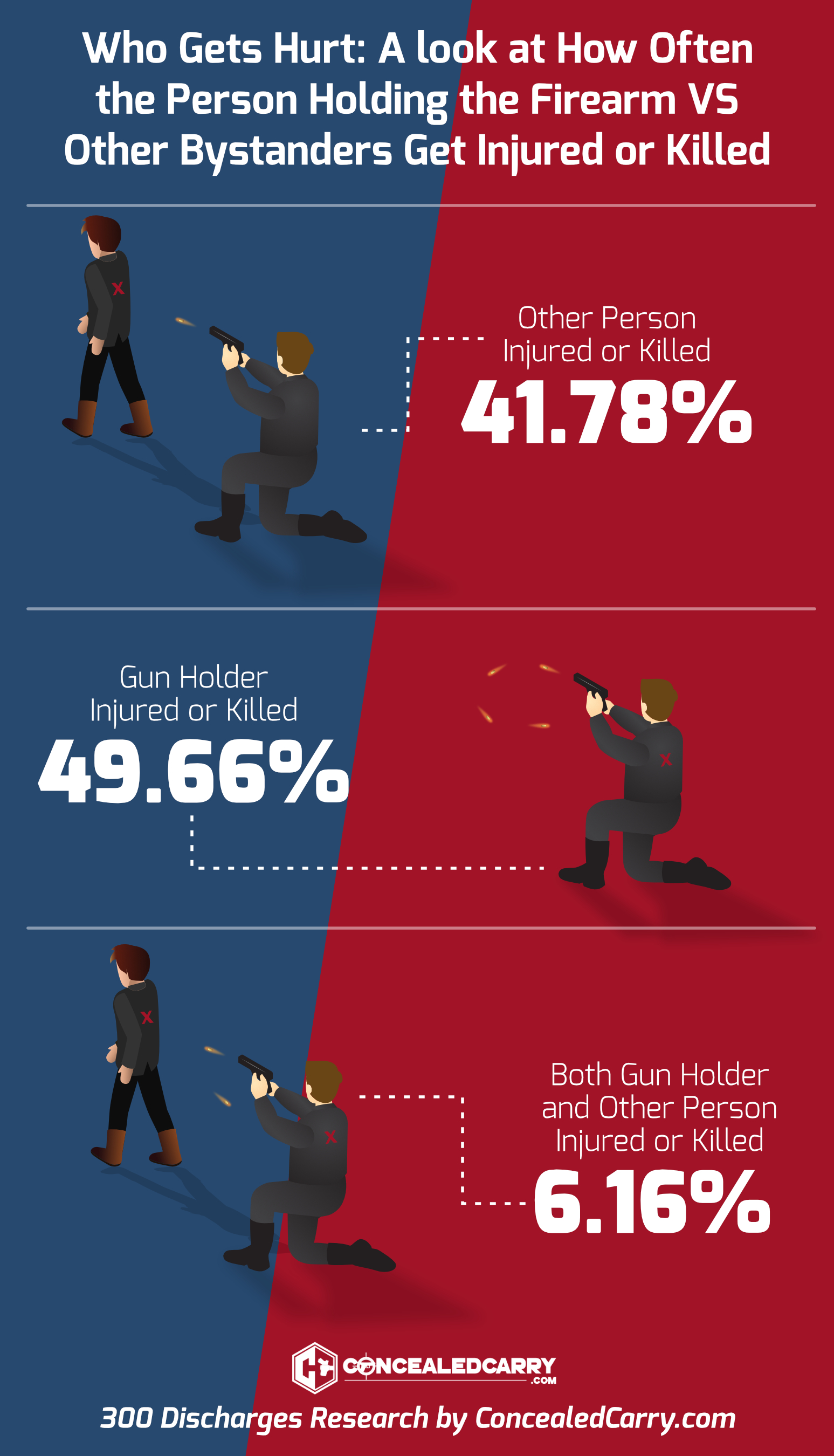 In the 300 news stories that are part of our study, nearly 48% of the time a negligent discharge injured or killed someone OTHER than the person holding the firearm.

So as you see, you have almost a 5 out of 10 chance of being injured or killed by negligent discharges if you are standing around someone else who sets off the discharge. The statistics are comparable to how often the actual person holding the gun is injured or killed.

This trend is one of the more shocking finds we discovered. Safety around firearms begins with you, but the fact of the matter is that even if you are well trained, the person next to you may not be, and they are also perhaps holding your life in their hands.

So if you see someone who is mishandling their weapon or not following gun safety procedures, you need to let them know how dangerous their actions could be because it's not just about their safety. It is about yours, as well.

WHO NEGLEGENTLY DISCHARGED THE FIREARM? 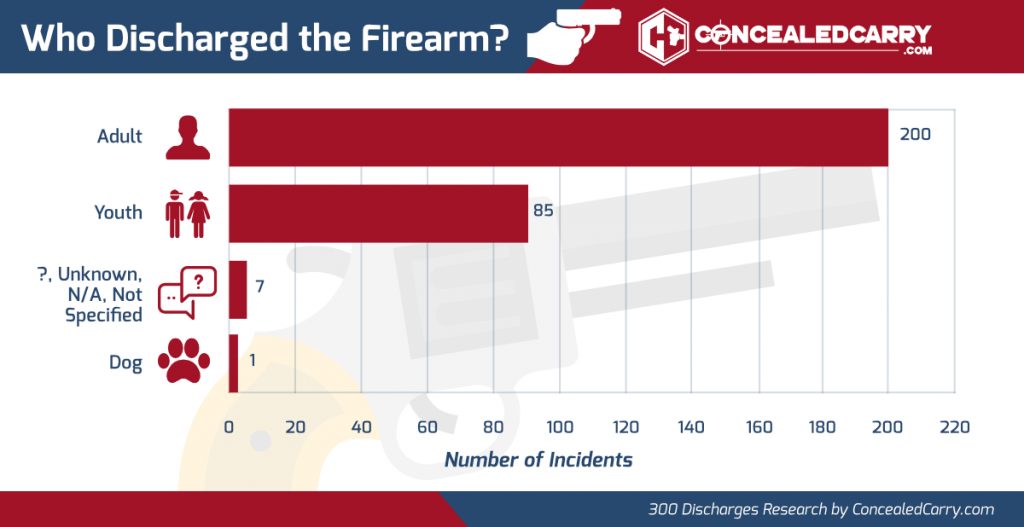 About 2/3 of incidents were caused by an adult directly. Excuses range across the board, the most popular being that “the gun went off by itself.” Sadly, in about 30% of incidents, a minor under 18 discharged the gun. In the vast majority of these situations, the minor had unauthorized access to the gun, left out by an adult or improperly stored by an adult.

Reading through the individual stories themselves serves as a solid and emotional reminder of the importance of keeping all firearms secured.

STATISTICS DON'T CARE WHERE YOU ARE

So let's take a look at just where these incidents are taking place. We received and reviewed incidents from all 50 states and found that some states did have significantly higher numbers of negligent discharges per capita. The gun grabbers would, of course, want us to believe that weaker gun control laws = more accidents. Our study found a ZERO correlation between gun laws and accidental discharges.

The Brady Score is the most common reference tool used by Gun Grabbers to identify states with “weak” gun laws. Their top 10 states for dangerous gun-related incidents are Arizona, Wyoming, Alaska, Louisiana, Montana, Arkansas, Virginia, Kentucky, Florida, and Nevada. So you would think that if weak gun laws were the most significant factor in these incidents, a map of negligent discharges would show the same information, but that is not the case. 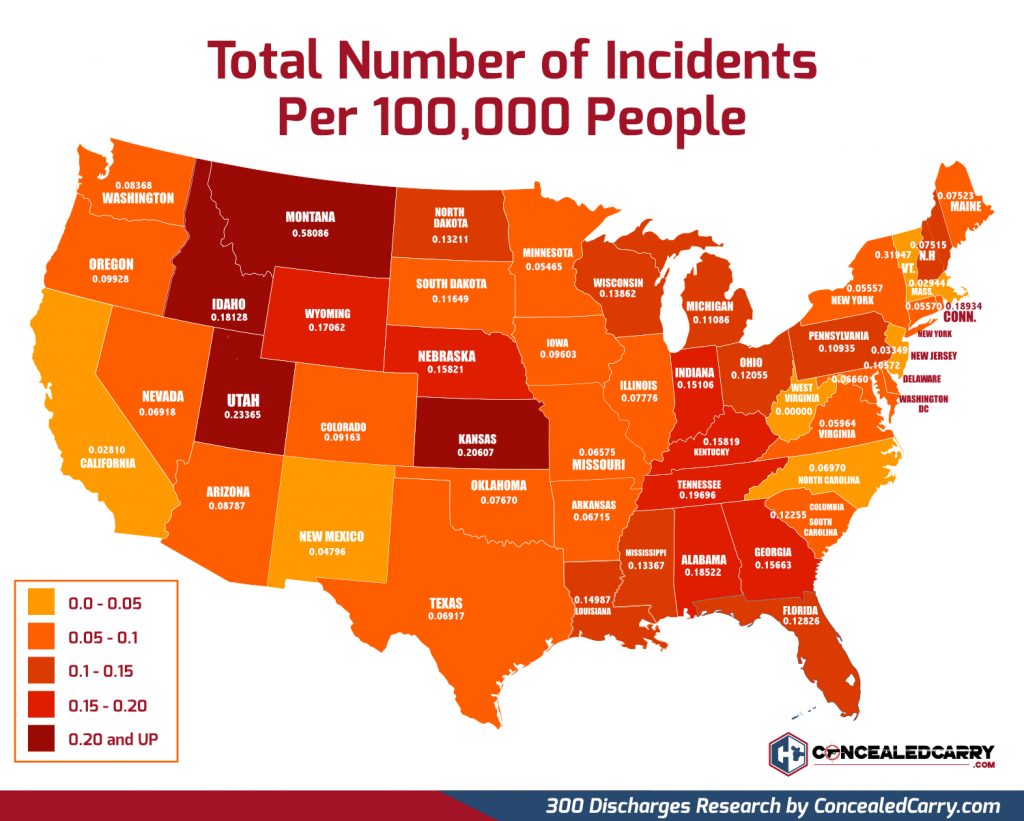 Take a look at the number of negligent discharges per 100,000 people across the nation. Our study didn't identify any incidents in Hawaii or Alaska.

We found NO Correlation:

The per capita negligent discharge rate is still high in some Brady Score states like Montana and Kentucky. Still, some of the states that the Brady Campaign identifies through their channels have incredibly low numbers on this chart. Alaska is #3 for “weakest” gun laws, and we didn't identify any incidents in Alaska at all.

At the same time, Virginia and Arkansas are ranked 7th and 6th in gun danger on the Brady Campaign's scale. But here, we see that they are well within the bottom half of states with several incidents.

I am not suggesting that weak gun laws = fewer negligent discharges. The data suggests there is just NO CORRELATION at all between the gun laws and these “accidents.”

So it seems that geographical location, access to guns, and even gun crime are not significant in the number of negligent discharges. But what about places within those states that have more guns available? Places like gun shows, or ranges, or even going hunting?

Well, it seems that the numbers prove that once again, these kinds of things can happen anywhere. However, sadly from what we have found, most of them occur at home. 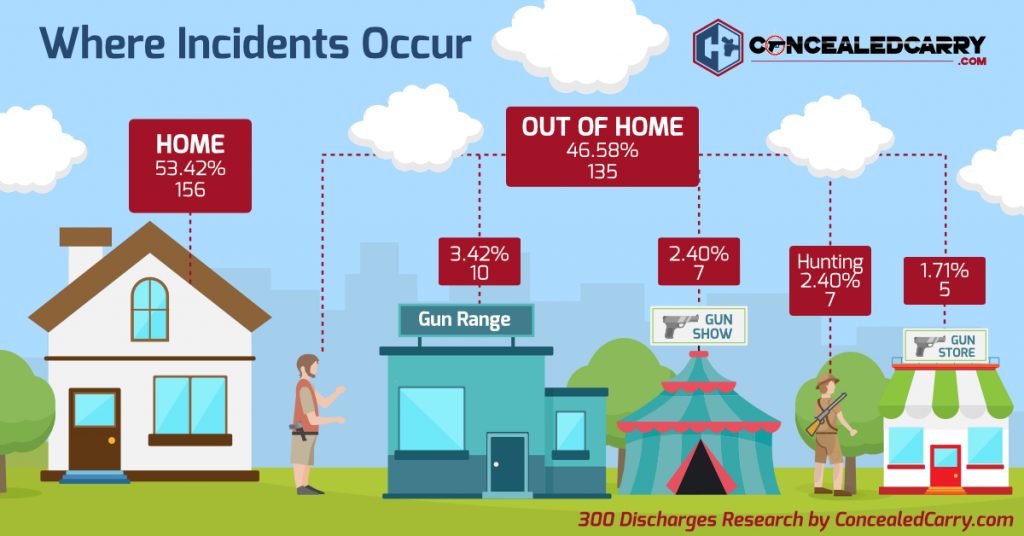 Here is a view of where the negligent discharges we reviewed occurred. A few news stories didn't identify the location of the incident. The Out of Home total includes the incidents at the gun range, gun show, hunting, and gun store, in addition to all other out-of-home incidents.

There are many reasons why we saw that the home was the most common location for these discharges. A LOT… and I mean FAR TOO MANY of these incidents happened when a child picked up an unsecured and improperly stored firearm.

There were also accidents while cleaning, or sometimes just playing around with the gun. But the overall trend is the same. It was simply due to a lack of care taken at home and people letting their guard down.

It makes sense as to why people relax more in the comfort of their house.

Still, as you can see from the numbers, the idea of simply throwing caution to the wind no matter where you are is something that should never occur and may end up being a reason for an injury or something worse.

IT ALL COMES DOWN TO PROPER TRAINING

We certainly can tell through all of these bits of information that there is no rhyme or reason regarding location or age, or even day of the week. 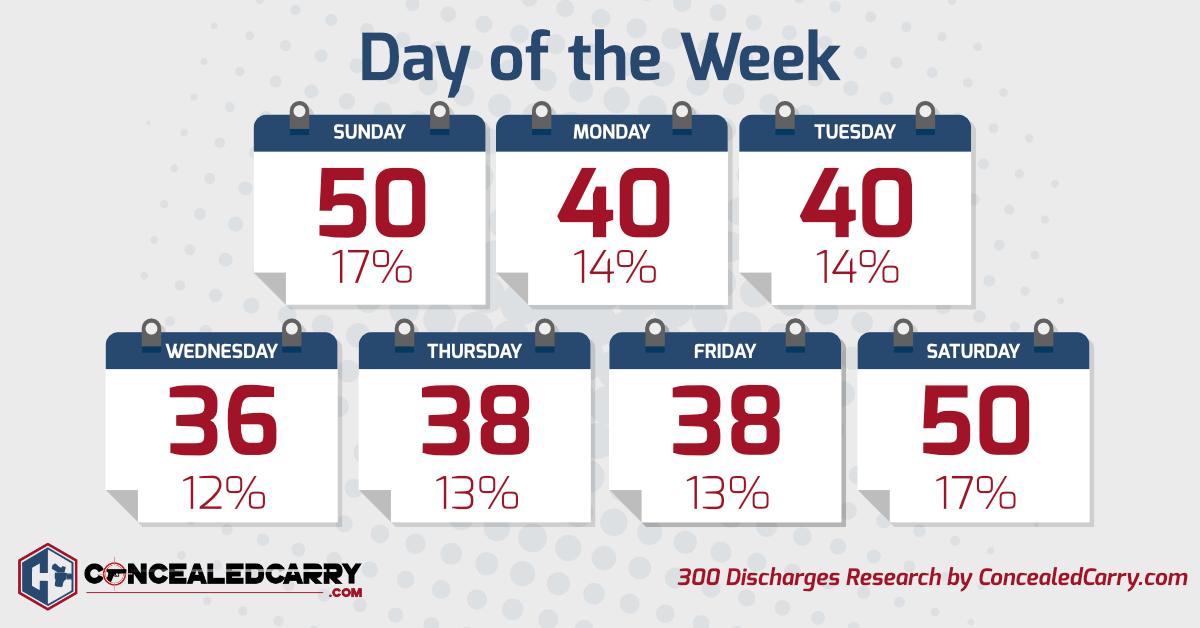 It doesn't matter what day it is. A discharge can happen anywhere and at any time.

No. There's no massive difference in safety if you are a Wisconsinite on a Wednesday or a South Carolinian on a Saturday. There is only one real common connection between these negligent discharges: a lack of training or a lapse in the practice of gun safety.

What does it all mean?

It is incredibly sobering to read these stories and know that there is more that we could have done. That's why it is our company's goal to train a generation of gun owners to be responsible, safe, and able to handle any situation necessary. (If you would like to see for yourself the 292 news stories where we got our data, click here: 292 Negligent Discharge Stories.)

Now I don't want to turn this into a lecture about the gun safety rules or the most common barriers to following them. I understand that following a strict diet of training and safety is work. But the work that you put into this can mean the safety and security of you and the ones you love. No, I'm instead asking that after reading all of the above, you take a moment and recommit yourself and your household to a higher level of gun safety. Do NOT compromise.

And if you need help or have questions, we are here! Our team exists to support gun owners in a mission—a mission of defending the innocent among us from the threats surrounding us. A big part of that mission has to link to the strict adherence of gun safety and gun rights expansion. We hope you will be part of our mission and our family!

Do you find this content valuable? Do you think it may help someone in your life be safer? Then I ask that you consider SHARING it using the share buttons above!

Also, be sure to let us know your thoughts in the COMMENTS section below. And if you are looking for additional RESOURCES, please click here for other content about gun safety!

Here is the complete Infographic from our Study. Below you can find the embed code if you wish to share this on your website.

28:27
Passing on Her Outdoor Passions for the Hunting and Fishing Sports with Kendall Jones
1 views