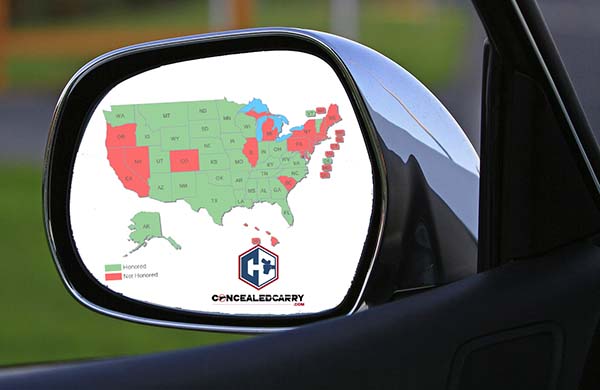 What follows is nothing more than the opinion of a once active duty Marine Corporal:

I'd like to take a moment of your time to let you know that I don't believe 50-state reciprocity was ever the goal of our lawmakers, and the congressional baseball game practice–more specifically the aftermath, proves it. Before we get there, let's go over a few necessities.

A well regulated militia, being necessary to the security of a free State, the right of the people to keep and bear Arms shall not be infringed. So reads the Second Amendment — That tiny little part of our Constitution protects our God-given right to self-defense against individuals (and governments) who'd see us harmed.

It doesn't really matter what your thoughts on the 2A are, because when our founding fathers wrote the law of the land, that's what they meant. It's still as applicable today as the First Amendment is, which is also being squashed by people on a daily basis … But that's a totally different point.


Our guns and the ability to use them properly ensure we don't fall victim to anyone wishing to harm us.

We carry guns because they are the great force equalizer. When presented with a dangerous group of individuals wishing to beat us to a bloody pulp and then take our goods, rape us, kill us, etc., the moment we feel our lives are on the line we have that opportunity to defend ourselves appropriately so we can live.

We carry and own guns because history has proven time and again that corrupt governments rise up, steal from, hurt, maim, enslave, and kill their people. Our willingness to fight back with the correct tools ensures that Americans residing in these United States remain FREE.

Make no mistake, my friends, the Second Amendment is the most important aspect of the Constitution because it protects all other listed freedoms.

It is a God-given right protected by the law of our land. Yet, there are some who wish to steal that right from us. Some people claim the Second Amendment does not apply to regular citizens, but the military and police, even though it's worded saying: “… the right of the people …”

How can the wording be disputed? It is a right, just like free speech is. To say otherwise is asinine.

And yet, being that I live in and have a licence to carry a firearm in Pennsylvania, I can't go to any of my eastern-bordering states or I'd be arrested and do hard time if caught … all for choosing to exercise my right to defend myself and family from harm.

It's sad because I have family in New Jersey I'd like to visit more often, and a great friend from the Marines in Maryland, who, ironically, is a police officer in PG County (one of the deadliest in the nation). If I ever brought my gun to one of our encounters, he would have to arrest me because Maryland borders on insanity when it comes to guns.

So you know, I haven't seen that friend, one of my closest Marine brothers, in nearly a decade because I refuse to travel to the deadliest county in the country armed with only my good-looks as a defensive measure.

Before I move on, let me state really quick that the ability to own a firearm for protection is a right. It is not a privilege. It is something written into the law for all citizens of this country, not just those from specific, freer states from the Union or those more privileged than me.

We are now presented with the unique opportunity to make it illegal for an individual state to say that we cannot carry our legally owned firearm in their state. Never has there been a better time to reinstate our Second Amendment in states that don't recognize it. And yet all of our lawmakers have stalled on this issue.

Our government is currently filled with folks who claim to be on the side of the American people, but because nothing has been done yet, innocent people still fall victim to those who wish to do them harm–like what we saw at the congressional baseball game practice where that nutjob opened fire at and made sure there were only republicans playing before he opened fire.

Well gee … you'd think that this would light a fire underneath the rearends of these lawmakers to get something passed so that people could protect themselves, even in the likes of Washington D.C.

Oh, well you see, some of them did bring laws to the table. It's just that, some of those proposals don't apply to every day United States' Citizens, AKA: We The People. No, you see, congressmen are special and are more important than you or I, so they require the ability to carry a concealed firearm in all 50 states + D.C. Don't believe that congress is filled with special individuals? Here is a quote Breitbart got from congressman Brooks of Alabama:

… to recognize that congressmen are different from the regular citizens of the United States … We are also high-profile targets of Muslim and other terrorists, and that distinguishes us from the general public.

He then goes on to say something about being a “high-profile target” and being burdened with it as a member of congress. Hmm. Last I checked, I've never heard of someone being forced to run for office with a gun pointed to their head, and I'm pretty sure Brooks, while he thinks he's special, wasn't forced at gun point to run for office, either. So, while I'm saddened that his choice to represent the People who elected him is burdensome (along with the salary that comes with it), it is a burden he chose to bear.

While Brooks agrees that the general public needs to protect themselves, he still thinks they're special and should have special laws pertaining to just them. What kind of laws?

One such proposed law comes from Texas Rep. Brian Babin, who just wants to be able to have lawmakers carry guns in places not usually allowed, like D.C. Why just lawmakers, like congressmen? I concede that their lives are important, but what about your life? Isn't your life important, too? Don't you have a family who loves you? I know I do.

You'd think that it would be easier for them to just pass something where all citizens could carry in all 50 states. I mean, after all, they are US citizens, too. Right? If they were to pass something for all of us, they would undoubtedly fall underneath that umbrella and be protected by the Second Amendment and whatever laws they pass protecting what it says.

You'd think that, deep down inside they had the best interests of the American People at heart, and yet this particular proposal only applies to lawmakers, and not everyday citizens like you or me.

Huh. If I didn't know any better, I'd likely think that it was never the goal to pass 50-state reciprocity for us. After all, this would be the perfect time to do it, but it's not getting done.

While I don't disagree that congressmen might have bigger targets on their backs, I would argue that their lives are no more important than mine or yours. We have families who love us, as well, and any laws that pass should not just be for lawmakers to carry guns in D.C., or just apply to them in general.

Thankfully, there are some lawmakers, like Thomas Massie (out of Kentucky), who understand that ordinary citizens are important, too. He introduced a proposal that would apply to the common folks of this country, as well. We'll see what happens there, but as of right now with H.R. 38 sitting where it is at, picking up cosponsors but not receiving a vote, we have to wonder if passing such legislation for the American People was ever even the goal.

Am I a lawmaker? No, and to be honest, I'm happy I'm not. I am still a target, though. Let me explain: I'm a white, 37 year old God-loving male who was an active duty Marine, and is a strong gun advocate and promoter of the Second Amendment. My work regarding guns can be found all over the place, like on guns dot com, TTAG, Pew Pew Tactical, Home Defense Gun, Off Grid Survival, Survival Life, TN Gun, and many, many more. I was also the managing editor at Gun Carrier for nearly two years, and that's my title for this website, Concealed Carry, as well.

I'd also bet you've got some targets painted on you, as well. I can tell just because you're here, reading our website that you are a freedom-lover, and people like us don't fit the mold. We are all targets, and can be in an attack at any point in time. Those of us unfortunate enough to live in a less-free state are more likely to be targeted by a criminal or terrorist … history has proven this fact time and again. All you need to do is compare Vermont with Illinois, or remember San Bernardino.

I've been talking about targets a lot in this opinion piece of mine, and it's time for a shameless plug for some awesome adhesive, reactive targets we sell in our online store. Make sure you go check them out.

Stay safe out there, my friends.

3 Responses to 50 State Reciprocity Was Never The Goal, Baseball Shooting Proves It