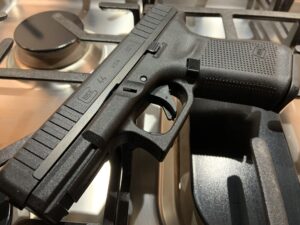 The Glock 44 chambered in .22 Long Rifle was met with skepticism. However, due to ammo scarcity and price inflation in 2020, the G44 handgun is a pretty hot item.

What do Gaston Glock and the COVID-19 pandemic have to do with each other? In 2020 anything goes, so here is the connection. At the 2019 SHOT Show Glock released the Glock 44. The G44 wasn't some high-speed carbine or an industry upsetting platform like the Sig P365.

Nope, imagine the thrill of shooting .22 long rifle (LR) out of your Glock 19. There, in essence, is the Glock 44. Immediately gun owners bristled at the ‘lack of innovation' from Glock. However, in retrospect, perhaps those complaints were a bit short-sighted.

Just maybe the same intuitions that keep Glock among the top handgun manufacturers in the world allowed them to execute a terrific play. Allow me to explain. 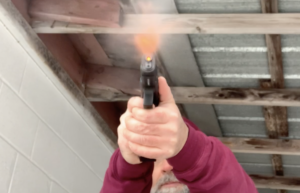 A rare photo of the awe-inspiring, flame-throwing Glock 44. Okay, not so much, but it is exceptionally fun to shoot this handgun.

It is hard to argue with the success the Glock 19 has deservedly earned. It is the most carried everyday carry concealed carry gun, and it is the generic answer for the dreaded ‘what gun do you recommend I buy' question. So while it may not be the re-invention of the wheel, there are several valid reasons that a Glock 19 that fires .22 LR makes sense.

Some Reasons A Glock Chambered in .22 LR Makes Sense:

The draconian COVID lockdowns have crippled manufacturing supply-chains and closed stores. The third-world style, lawlessness, and inability/unwillingness of law enforcement to protect average citizens underscored the necessity of owning a firearm for protection.

According to the FBI, the number of background checks for firearm purchases crushed the numbers of any year in history. That is a lot of new guns and owners purchasing a lot of ammunition.

And the presidential election with rhetoric overtly hostile toward the second amendment have all combined to produce an ‘ammogeddon' worse than any other time. 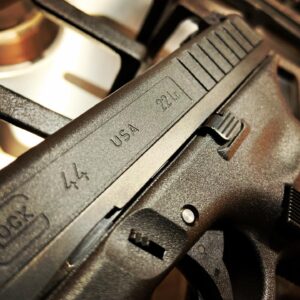 The gun is incredibly light but has the feel of your typical Glock pistol.

The price for full metal jacket (FMJ) and self-defense jacketed hollow point (JHP) rounds, is about two and a half times the regular price. That is if you're not getting price-gouged by unscrupulous companies like Cheaper than Dirt.

For reference, I typically would purchase FMJ 9mm at about .15 cents per round. That is shipped and delivered at my door. Currently, I am jumping at the same ammunition for .30 – .32 cents per cartridge, and I still have to add on shipping costs!

Re-loaders have difficulty sourcing products to reload, as primers are scarce or non-existent which only adds to the problem.

No caliber of ammunition has escaped the inflated costs of 2020. However, this diminutive cartridge seems to have weathered a bit better than 9mm, .40, 45, and .380 cartridges. It seems the G44's serendipitous release may benefit Glock and gun owners by providing a cost-effective way to get some live-fire in. 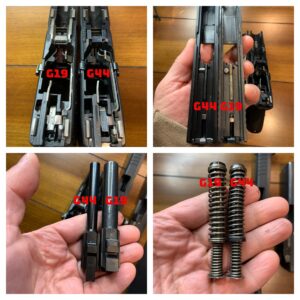 Here are the slide, frame, barrel, and recoil spring, guide rod of the Glock 44 and Glock 19 handguns side-by-side.

How about the Glock 44 for ‘continuity of form and function'?

A firearm with the same grip size, shape, and angle where the magazine release is in the same spot as the original while fitting into your holster are all huge plusses.

Learning and teaching with a .22 LR is incredibly useful.

For a new shooter, the first few experiences with a handgun can make or break their confidence. Poor fundamentals result in the gun moving in the shooter's hand during recoil. All of this causes anxiety and uneasiness because they do not feel in control of the gun.

Being able to place a Glock 19 sized gun in a shooter's hand and have it shoot a cartridge that causes nearly zero recoil is a winning combination. As an aside, the reduced report of the 22 round can also help lessen the anxieties of a new shooter.

I would be remiss if I didn't mention that it is just fun to shoot a little .22 LR round now and again. Every person who has tried out this G44 seems to enjoy shooting it.

What is Unique About the Glock 44, Compared to Other Glock Handguns?

Although many of these features are the same across many Glock models, I will use a G19 for comparison. First, you will notice the gun is lighter, significantly lighter. A loaded Glock 19 weighs about 30 ounces, while the G44 is coming in at just 16.5 ounces.

Glock shed weight by using a mostly polymer slide. And while the barrel is not fixed as on many other .22 LR semi-auto handguns, it does not use a tilting barrel design. By implementing both of these features, the low pressure .22 LR ammunition is able to cycle the slide properly.

The G44's trigger pull is definitely “Glockish.” No one is going to rave over its feel, and you can't just drop in your G19 aftermarket trigger. However, fear not, there are plenty of aftermarket triggers for the G44 if you desire something different.

The G44 has standard and night sight factory options. The standard rear sight that came on the gun I tested had windage and elevation adjustments. If you're curious, it has everything to do with the ATF's astoundingly arbitrary ‘import test' point system. A handgun must score 75 points in different categories so it can be imported.

Among other features, the adjustable ‘target sights' give the G44 enough points to pass.

The gun's basic takedown procedure is the same, including removing the striker assembly. The only difference is in the construction of the slide, which is an intricate locking together of several pieces.

Thankfully, the owner won't have to do any disassembly of the slide.

There are no finger grooves on the G44's grip, but the magazine release is reversible and it comes with small, medium, and large backstraps. 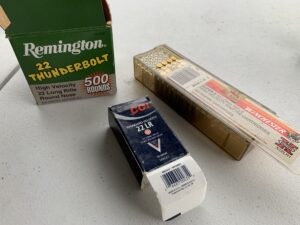 I put about 350 rounds total from these three manufacturers.

How Does the G44 Perform?

I ran around 350 rounds of 3 different types of ammo through the gun:

I have read about G44's being jam-o-matics, and frankly, my experience with .22 LR semi-auto handguns shows that they can be persnickety little things when it comes to ammunition and maintenance. Here are the results of this short, 350-round test:

Remington Thunderbolt would not reliably cycle. I had a host of failures for fire, extract, and eject. I didn't see much of a primer strike on the casings, so I swapped out the striker spring for a stiffer one from my Glock 19 for a test.

This didn't change the reliability, but I did see prominent marks from primer strikes.

The retro-box of Winchester Super-X was the champ. I even ran a few cartridges of suspect patina through the gun, and it kept chugging along. 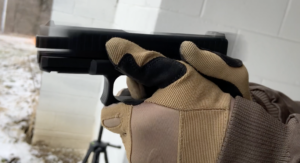 A high thumbs-forward grip with gloves may have been the culprit of a few failures with the slide not fully cycling.

Don't ever use the bulk Remington Thunderbolt in the G44. I have observed its sub-par performance in other .22 LR handguns over the years. I don't have a chronograph so I won't say it isn't producing the advertised velocity, but perhaps the quality control isn't enough to ensure every round is producing the proper velocity.

That is just speculation, and there may be some ballistic test on this specific cartridge that explains what the issue is.

Except for the Remington ammo, the gun ran fine. Even though I would never recommend the G44 as an everyday carry defensive gun, reliability is important.

It is a huge hindrance when you are trying to train or just have fun and the gun continues to malfunction. Of course, unless your goal is to practice clearing malfunctions, which we got a lot of practice at with the Remington ammunition.

For the skeptics who say I should give the gun a 1000+ round break-in period before commenting on its reliability or lack thereof. Maybe the gun does need a break-in period, maybe not. However, the Remington was shot early on in the round count as well as some of the last rounds shot through it, and failures occurred at both times.

What About Just Buying a .22 LR Conversion Kit?

Yeah, a conversion kit is something to consider. A kit will run about $250-$300. You will be getting a barrel, slide, guide rod, recoil spring, and magazine. Once you change everything out, you will be shooting .22 LR from your original Glock handgun.

This route provides the benefit of allowing you to use your aftermarket trigger, provided you have one. You're still not going to be able to use your optic or sights, as you won't be using your original. The kits typically come with one magazine, which is not fun.

Right now, if you can find one, a Glock 44 runs around $375-$400, which is a bit more expensive than a conversion kit. However, considering you are getting a second firearm for about $100 more. If I had a choice I would go with a G44 instead of a conversion kit.

So, if you were cursing Gaston Glock at the release of the G44 a year back, maybe it's time to give it a run at the range. It isn't going to replace your G19, but it is a super fun, .22 LR semi-automatic handgun with that all-familiar Glock feel.

Arfcom Booted by Godaddy (And How to Safeguard Your Gun Website)
Episode 470: JUSTIFIED SAVES – A Wild Month in DGU’s