Taken during my last range trip with the DBX.

More guns than ever are being released in the 5.7 cartridge. Just to name a few, the Diamondback DBX (the topic of this review), the Ruger-57, and the latest offering from KelTec.

However, the 5.7X28 cartridge has become somewhat of a unicorn as of late with in-stock prices rising to about 2$ per round, and that is if you can even find it in stock. Trying to find this ammo for a gun that was sent to me for review has turned into a mission of mine, as I check my sources for ammo each and every day.

Still, I've been able to locate some, about 250 rounds, and have been able to take the DBX for a long enough spin that I feel confident giving you my first impressions about this handy little pistol.

Making its debut out at SHOT Show 2020 on the range, the Diamondback DBX was dressed to impress. In fact, I went back through their shooting lanes more than once because I was so impressed with this little gun. 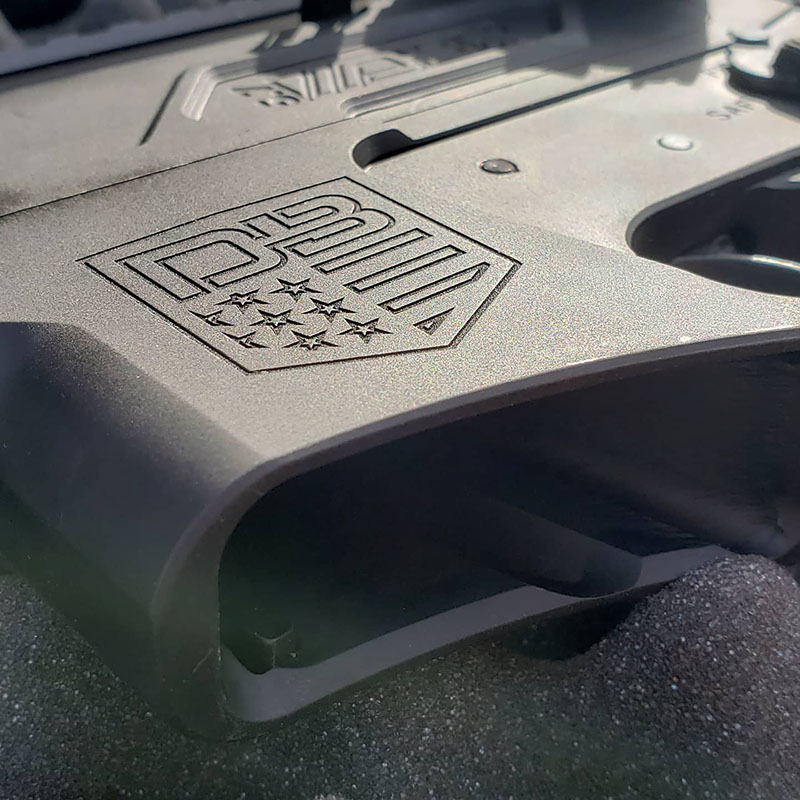 I knew I had to get my hands on one to really put some rounds downrange. Now that I have one, I'm happy to report that I'm keeping it. I want to be upfront about this so that I'm not called a shill or whatever the popular term is these days, due to the cost of ammo Diamondback has gifted this firearm to me, which is something that is truly rare.

If I had to sum this pistol up in one sentence, it would be this: The DBX offers the familiarity and, so far, reliability of good AR-15 rifles, while somehow being a totally different platform.

How is that possible? Well, for one, the DBX is chambered in the quick-moving 5.7X28. Already things have veered off path from the traditional style AR, with just the cartridge alone. We move on from there in that the gun takes a standard FN Five-seveN magazine, that I just found a 30 round option for and may or may not be about to stock up on.

Another difference is the size on all fronts. This pistol is just 2″ wide and almost seems petite. I haven't had a chance to weigh it, but with an empty mag their website lists the weight out at 3 pounds.

This equates into a maneuverable pistol that only produces a mild amount of recoil. In fact, the video below shows my good buddy Joe shooting the DBX at SHOT Show last year, and shows his reaction to the lack of recoil:

Follow up shots with the semi-automatic action occur at lightning speeds because of this lack of recoil, even though it is super lightweight.

If you looked closely at the video and saw some things that were a bit different from the pictures I showed you, that's because this pistol did not come to me with the 1913 SB Tactical folding pistol brace as pictured.

I would have preferred it that way, but I'm currently shopping around for a brace for it.

At some point after SHOT 2020 and the time I received the pistol, Diamondback decided to avoid any issues with the ATF regarding the pistol brace drama that has been taking place for the past several months and have stopped shipping the pistol with the brace. 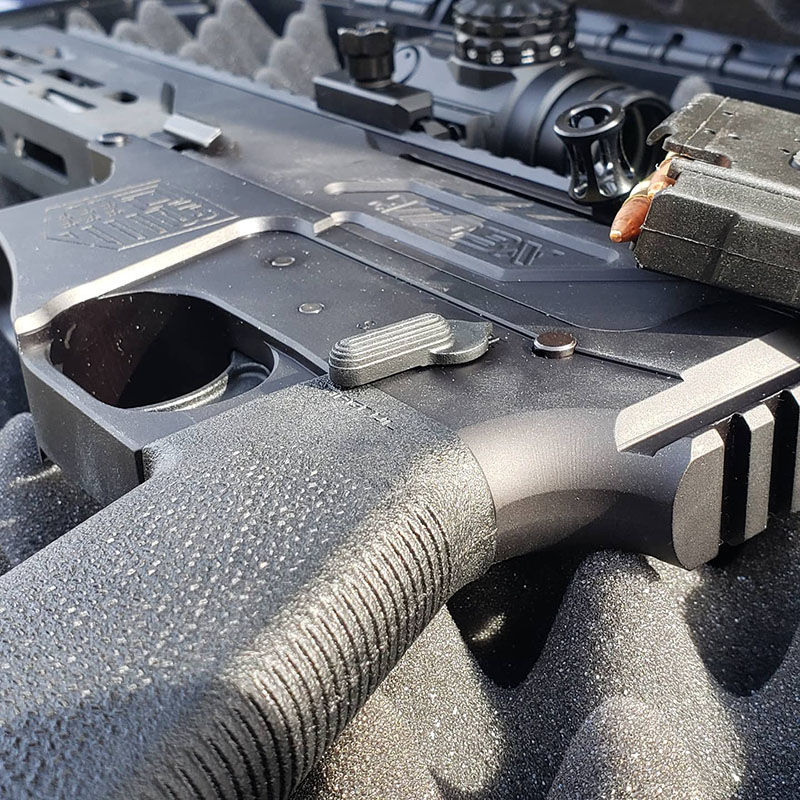 As you can see from the above picture, there is an accessory rail on the back of the receiver that is integrated into the lower which can have a brace installed, or maybe an attachment for a sling to fire the DBX like it's an MP5 or similar.

You'll also notice from the above picture what I was talking about in regards to the similarities between the DBX and the AR-15 platform. It looks like the lower parts are the same, and are very functional.

This firearm seems to be aluminum without a hint of plastic on it, except in the usual places like the Magpul MOE grip. Because it's aluminum it is supremely lightweight and capable of being fired, with enough ammo, for a long time.

Another thing that's absent is any type of sighting system. While I'm not sure which optic will find its way onto this gun, the pictured Primary Arms Cyclops is a great temporary solution, but may not be the final optic (because I like it on something else).

Stay tuned for a review of this Cyclops Prism at some point either next week or the week after, as I've had it on two guns so far and have fallen in love with it.

I like the fact that I can install whatever I want on the flat top pic rail, and may go with a pair of irons, or something else. Not entirely sure yet. 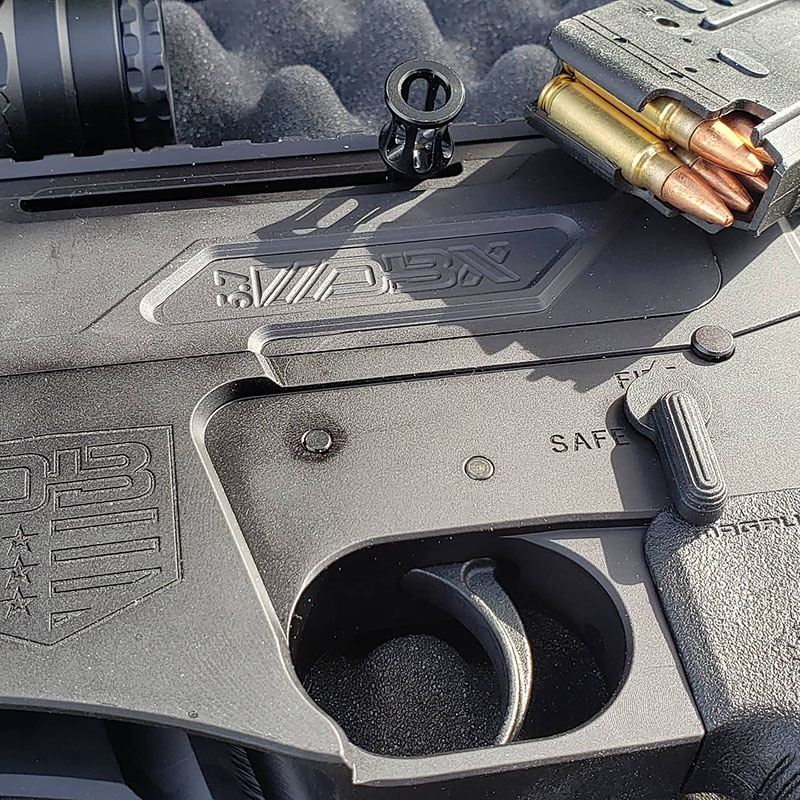 The charging handle can be moved to the left or right of the pistol depending on which hand is your dominant, and the rest of the controls are familiar if you've spent any amount of time with an AR-15.

Accuracy is right about what you'd expect to see, though I was shooting at steel and not exactly measuring groups. I was shooting at 15 and 20 yards, offhand, and without a sling or brace without any problems ringing the standard-sized competition steel plate we were targeting.

This is likely an excellent backpack gun, which is something that is getting more and more popular. When and if the zombie apocalypse (and by zombies I mean brainless people) ever kicks off, you'll be much better off with something like this to get you home, than you would with just your holstered handgun.

Its small stature and ability to have a folding stabilizer brace attached to the back boost its usability up even more, even if the ammo is almost non-existent right now. Overall, I'm pleased so far.

Now if I could just get ammo for it without having to spend nearly 2 bucks per round I'd be all set.

You can find out more information on the company website, here.

Have you had the chance to shoot one of these yet? If so, what did you think about it? Let us know in the comments below.