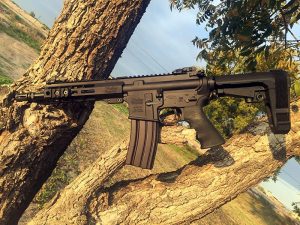 I'd say that chances are good that you've heard at least some of what is going on with the gun maker Q, the pistol braces they install on their guns, and the BATFE sending a letter saying pistol braces are not okily dokily with them.

More information has recently come out from our good friends over at Ammoland, and I thought it prudent to throw my loose change (in the form of my thoughts and words) out into the mix on this very subject. Why? Because this is important stuff, regardless of what your thoughts may be on the item in question.

If the BATFE decided to go after pistol braces on a large scale like I suspect they want to, they'd turn millions of people into criminals. AND, it's a foretaste of what is to come with guns, in general.

I'd like to start out by saying that I have the personal feelings (not speaking on the behalf of the whole company) that the ATF is just about as worthless of a governmental organization as you can get (speaking about leadership, not necessarily boots on the ground who are generally decent people).

As much as I'd love to just go to the local gun shop and buy these things, it's never going to happen.

Sadly, with the current makeup of our country no politician in their right mind would suggest doing away with either the ATF or the NFA because it could be detrimental to their election. Anyone on the voting fence could be swayed just because they don't like “gun silencers.”

They know that we're going to vote for them anyway because they're always “better than the alternative” and doing the right thing is often far less important than one's own greed to hold public office (AKA have power).

I'm in no way suggesting that we stop saying this needs to happen, however. We need to be loud with our voices and disgust toward the infringement of our rights.

So now that we've gotten that out of the way and have hopefully come to an understanding that no matter how worthless the ATF and the NFA are, they're here to stay, let's move on.

Are we really surprised that the ATF is itching to come after pistol braces? I'm not the least bit surprised. Pissed off, sure, but surprised? Nah.

Think about it for a moment: SBRs are considered to be, somehow, more dangerous than regular rifles or even pistols are. We cannot have them because, well, they're bad … apparently. So if you or I wanted an SBR we'd have to go through the NFA, jumping through the necessary hoops.

(I'm not going into detail on specifications because we'd be here forever. Suffice it to say that a rifle and/or a pistol needs to have certain qualities and dimensions in order to be considered a legal rifle or pistol. Any legal rifle or pistol can be modified to be illegal, one of those ways is by modifying its overall length, in the case of an SBR, a rifle is shortened. In the case of a pistol, it's adding a stock.)

But then, some smart people got together and designed a product that makes it so that you can have an AR pistol (or other pistol) with an arm brace (that is not a buttstock) that can technically be shouldered, but was not designed to be shouldered. In other words, they went around the definition of an SBR, brilliantly, and even got the ATF to sign off on it.

Now they've got this hot item that everyone buys multiples of, effectively giving us a way around needing a tax stamp along with the gun industry, at large, poking fun of the idiocy of the ATF for making up arbitrary laws that make zero sense.

And, at some point along the way, their feelings got hurt.

The ATF is like a rebelling teenager with the sole purpose of revenge.

We make fun of them constantly with memes, like this: 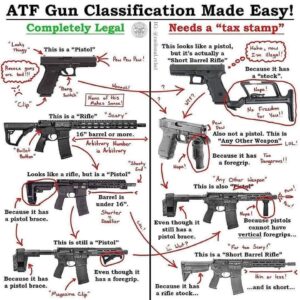 I think I found this one on Reddit, but it shows just how ignorant the ATF can be.

I'm not saying we're wrong, because it's all true. And hilarious.

I mean, how they can get from one point to the next by saying one thing is illegal but another is not, is not just asinine but, I believe, way outside the scope of the ATF — hence everyone's calls for them to be abolished.

But that's not really the point. The point is that we really shouldn't be surprised that they're now coming after pistol braces after we've been making fun of them for so long.

We've shot ourselves in the foot, so to speak. As of right now there is nothing solid out there saying that they're coming after all pistol braces. But I can't imagine a world in which they won't one day come after them.

And I don't believe this ends with Q and their Honey Badger pistol, either. As Ammoland pointed out, it seems like other letters were sent out to different manufacturers and the underlying goal seems to be the pistol brace in general.

But here's the thing, this isn't going to be like the bump stock ban. A lot of us did not own bump stocks. Whereas most of us own pistol braces. Heck, I own more than one. This means that hundreds of thousands and maybe millions of gun owners will be turned into a criminal if the BATFE gets their way and moves forward with some sort of new rules on pistol braces.

And before you ask what this has to do with concealed carry (and I know at least one of you would because you did last time I spoke about this) let me say that while our website is about concealed carry in general, it has a broad scope of self-defense as a whole. This is why we talk about pepper spray and other non-lethal products, in addition to handguns and home-defense.

In fact, I'm working on a review right now on a CMMG Banshee which is an AR pistol that I intend to put in a backpack in case I need it to defend life. It's not traditional concealed carry, but it still fits well within the scope of this website.

I believe that now is the time for us to take action on this. A unified front of millions of gun owners sends a very strong message and I strongly urge you to reach out to your local lawmakers to let them know that we're going to be angry if the ATF makes this move.