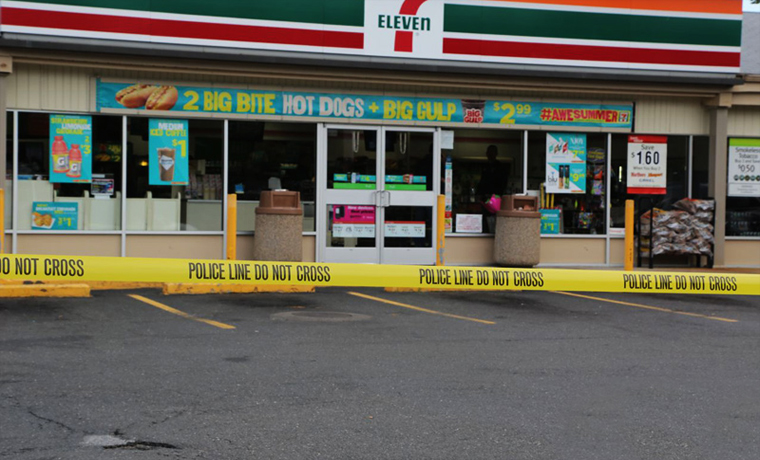 Is it ever okay to shoot someone in the back as they flee? First, a little backstory:

Back in March of 2016, Min Kim, the owner of a Spanaway, Washington convenience store was part of an incident that had become all too common in his store, shoplifting. But this time, Kim wasn't going to stand for it.

Jakeel Mason was in the process of attempting to steal some of the good's from Kim's store. This incident was nearly a month after a similar incident occurred in which Kim's wife Seul Lim was working at the same store and a case of shoplifting quickly turned into a nightmare as the shoplifters of this story pulled out a gun and shot Lim in her stomach.

Thankfully, in that case, the men were arrested and Lim was released from the hospital after only a few hours in the E.R., but the fear that this incident caused throughout the family was felt on the day Jakeel Mason went into the store and attempted to steal.

Min Kim had originally told KOMO News in Seattle that the incident with Jakeel Mason was going a similar way. He came into the store and began to shoplift. At that point, Kim pulled a gun on Jakeel, to attempt to scare him away. However, according to Kim a struggle over the gun then ensued and after a few moments Kim, fearing for his life shot Jakeel Mason. As the cops arrived, Mason was already dead.

However, this story wasn't all it was cracked up to be. Kim later went to trial for this shooting because of irregularities between his story and the events that were shown on the store's security cameras. The cameras did not show a struggle or even an armed Mason shoplifting. What they showed was an unarmed Jakeel Mason running out of the store, followed by a gunshot striking him in his back before Mason fell to the ground.

After seeing this, the courtroom rendered a verdict that will cost Min Kim 8 years of his life behind bars. Kim, in a statement in court, was deeply apologetic for what he had done stating:

“I did not have the right to take Mr. Mason’s life or anyone else’s life, I feel terrible that I did so and will have to live with that for the rest of my life.”

This, then, begs the question: Is it ever okay to shoot someone in the back as they flee?

Before we go any further, I do want to point out a few things. First, I am not an attorney and nothing I say here should be construed as legal advice. It's always best to find an attorney who can help you understand the gun laws in your state. Second, nothing is definite. Not all self-defense situations are the same, and what you need to do in the heat of the moment is make a split-second decision of whether or not you'll pull the trigger, or not.

There are certain things we must all be aware of when we decide that it's time to own a self-defense firearm. Some of the things we must know with absolute certainty are gun handling, gun safety, your home state's gun laws, how to practice with your chosen firearm, and, finally, how and when you can shoot in self-defense. There are others, as well, but this time around, we're going to talk about that last one because if you don't know what you're doing, you could end up in prison like the subject of the article is.

There is a lot of confusion and misinformation out there regarding when you can and cannot “defend yourself.” I want to state right here that, a lot of the time, in order to claim “self-defense” in a shooting, your life has to be in danger. Depending on the state where you live, you may have a really hard time building a defense in court if you shoot someone as they flee from the scene.

Why? Because at that point, unless he has a gun and is shooting at you or you believe that there is a chance he could hurt someone on the way out, no life is in danger. It may not be a good idea to shoot no matter how you feel at that point about being robbed, what amount of damage has been done to your pride, or how angry you are over the whole ordeal.

There should be a perceived threat, and you may have to prove it in court, which can be hard to do if you shoot someone in the back as they flee. In this case, our subject lied, or thought he saw something totally different in the heat of the moment, which is why it's a necessity to not talk about what happened afterward until you speak to your attorney, first. Otherwise, you could end up having to backtrack in court like Kim did.

A lot of folks fail to understand this, and it's almost as popular as the “drag the body back inside” argument some ill-informed gun owners make. Case in point, one of my friends owns a gun shop that I frequent whenever my hectic schedule allows. I used to help him out behind the counter when one of his employees would call out, just to be a good friend. The last time I helped him, he told me that if someone ever came into the store with the intent to rob, we were to let him have the goods, and then shoot him on the way out once the threat was over and he could recover his goods.

However, if he were to do that, it could be the beginning of a huge headache for him. No matter how hard I tried to help him understand the fault in his thinking, he didn't get it. And, after multiple attempted gun-store robberies in my area, he still believes the best course of action is to shoot a thief as they leave his store.

Here's the thing, though: You are only allowed to use deadly force when you believe serious bodily injury or death may occur to you or someone else. To make it more interesting, in many states just unholstering your gun can be seen as deadly force. In other words, you don't even need to fire a shot off.

Let's say someone walks up to you and says they've got a gun in their pants and they're going to reach in, pull it out, and kill you, but then the person keeps walking. Is that immediate danger? The answer is NO, it's not immediate at this point. Does that mean you let your situational awareness go out the window? Not at all, continue to be prepared for that imminent threat should it actually come.

Now, let's say that this man walks up to you and then actually pulls his gun from his pants and begins to bring it up saying he's going to kill you unless you unload your pockets into his hands. Do you think that at this point your life is in immediate danger? I think the answer here is YES. He isn't using merely words, and his actions are dangerous as he begins to point his gun at you.

A perp running away, not shooting at you, is not necessarily a threat (though he could be and each scenario is obviously different). At this point, what you do is call the police for assistance and give them the best description you possibly can.

Another side of this, that some folks don't think of, is each bullet that leaves your barrel is yours. Your name is on it. Shooting a target that's getting smaller because it's running away from you isn't an easy task. Even if you're in a scenario where it is totally fine to pull the trigger on a fleeing suspect, if you hit an innocent bystander, killing that person, it's on you–even if the criminal is likely to be charged for it. Keep that in mind.

Taking it a step further than that, do you actually want to kill someone who isn't actively trying to take your life, but running for theirs? Personally speaking from an ethical standpoint, unless someone's life is on the line, I'm not going to pull that trigger. In the end, it's obviously always up to you, though.

Let's recap: you need to believe that your life is on the line to use deadly force. Not only that, but you also need to prove that your life was on the line. Will a reasonable person in a jury believe that your life was in danger when you shot someone in the back as they fled? If not, you could end up facing jail time just for trying to do what you thought was right. Also remember that every scenario is different, and it may be okay to shoot. We'll try to cover when it may be okay in a future article, or maybe even on the podcast so stay tuned for that.

17 Responses to Is It Ever Okay To Shoot Someone In The Back As They Flee?