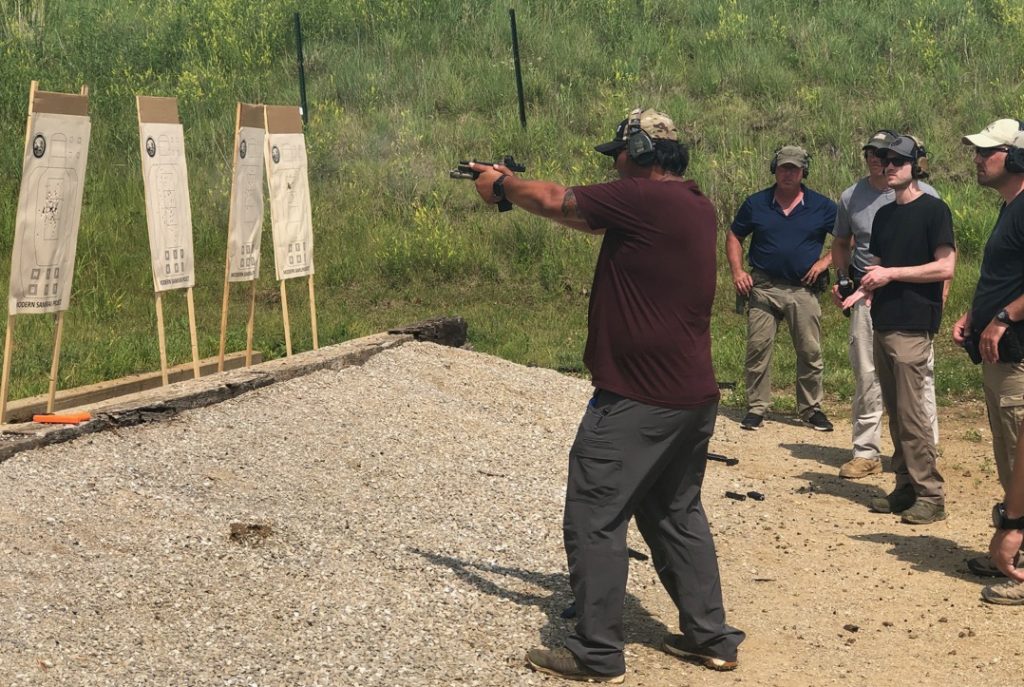 There is little doubt in the professional firearm or self-defense community that mindset is the most important aspect of preparing for and surviving a defensive encounter.

Over gear, tactics, or skills, one's mindset has the greatest bearing on a positive outcome.

The Big Challenge? A defensive mindset or concealed carry mindset can't be purchased. And it is hard to practice, and or measure.

In thinking about my own level of preparedness as an armed citizen I began to ask myself what makes up a good mindset and how do I develop one?

The Importance of a Proper Mindset

In trying to answer that question I embarked on some research. I searched through a few websites and blogs written by professionals who I respect.

I went back to some YouTube videos from some of the best trainers in the business. I watched past interviews I have conducted in our Guardian Live series and on the Concealed Carry Podcast.

I found that the most valuable thing I did to better understand mindset was to go back and review our collection of Defensive Gun Use (DGU) stories. Documented incidents where the gun owner failed either the physical or legal fight.

Identifying where a fellow gun owner may have failed due to a less than adequate mindset led me to better understand what makes up a good mindset.

Through this research and with the help of some experts in the field I've identified the following 6 components of a strong mindset: 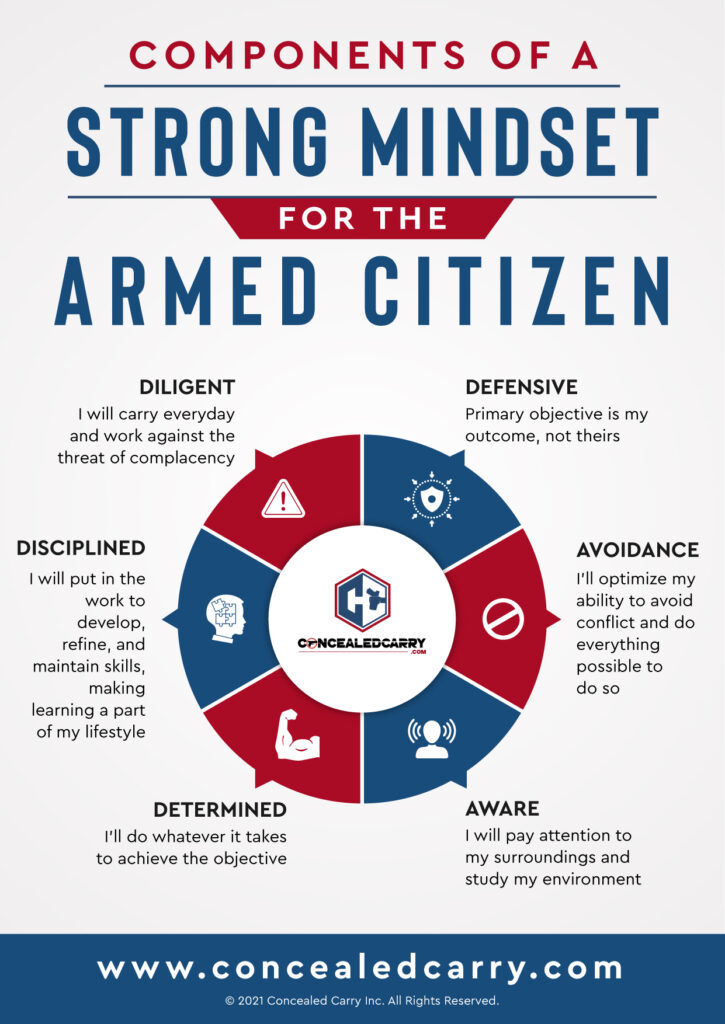 The Six Components of A Concealed Carry Mindset:

An Armed Citizen is Defensive Only

A defensive mindset means being focused on the survival, victory, and ultimate outcome of yourself or the innocent people you are defending.

When we focus on our own outcome we act in ways that meet our objective of survival, rather than bringing someone to justice.

Behaviors of a Defensive Mindset

A defensive-minded person prioritizes their actions to put the positive outcome of the innocent party first above all else.

A mindset of avoidance means one lives their life consistent with minimizing the odds of a life-threatening encounter.

Behaviors of a Mindset of Avoidance

An avoidance mindset is about making proactive decisions that minimize risk. 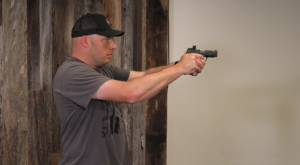 Handgun training is only one aspect of the proper self-defense mindset.

An Armed Citizen Is Aware Of Their Surroundings

A mindset of awareness means one is paying attention and isn't distracted. They are also always aware of simple things that help them better respond to emergencies.

Behaviors of a Mindset of Awareness

An Armed Citizen Is Determined To Win

A determined mindset means one is committed to doing whatever is necessary to guarantee the desired outcome.

This means there is no hesitation the moment it becomes clear that action needs to be taken.

Behaviors of a Determined Mindset

A determined gun owner has a deeply held willingness to do whatever is necessary to prevail. They seek to better understand what might be required to survive a life-threatening encounter.

An Armed Citizen is Disciplined In Their Approach to Improvement

A disciplined mindset means one is committed to continuing forward in their journey of gaining better knowledge, skills, and tactics.

Behaviors of a Disciplined Mindset

Most importantly a disciplined gun owner is not just aware but is also proactive in their development. They are enrolled in a future class, they are in the middle of a book, and they are conducting practice to address their weakest skills.

An Armed Citizen is Diligent In Daily Preparedness

A diligent mindset means one never relaxes or chooses to not engage in a prepared defense.

Behaviors of a Diligent Mindset

How to Strengthen Our Mindset

Like shooting skills or any skill or attribute it is often helpful to identify just one area of focus to work on in your journey to improve.

From the 6 mindset attributes above, identify the one in which you feel you are the weakest. Then set simple goals to work toward in improving that aspect of your mindset.

For example, of the 6 attributes, my weakest is Diligence. I often become complacent in my learning and my general preparedness. I have set goals to work on specific routines and habits so I can be more consistently diligent.

What will you work on next?

Ever wonder what the common errors concealed carriers make?

Or what about the challenges facing anyone who responds to a mass shooter threat? Consider these 5 points.

If you are interested in working on your shooting skills, check out this new course called Shooting Fundamentals. It is a fantastic resource that challenges what you may have learned in other handgun training classes.

16 Responses to Developing and Understanding A Strong Defensive Mindset