If you are like me, Murphy's law, or the idea that if there is a possibility for something to go wrong it will go wrong, has you trying to anticipate and prevent negative things from happening when you can.  Even with much planning and attention, Murphy occasionally wins.  In fact, a line from the Arthur C. Clark novel, 2010: Odyssey Two perfectly summarizes this concept;  “Floyd could imagine a dozen things that could go wrong; it was little consolation that it was always the thirteenth that actually happened.”  Can you relate?  I know I can.  Now you may ask yourself what does this have to do with firearms?  The answer is simple, yet important…safety.

During a recent concealed carry class I observed something that I have not seen in all my time instructing or firing handguns.  This is not one of those stories where a piece of brass flies into a shooters shirt or something similar causing them to dangerously flag the line with a loaded firearm as the scream and dance.  As real and dangerous as these stories are, they are not as uncommon as this recent incident.  Even though this incident caused a potentially dangerous situation,  because the shooter stayed calm the ‘one in a million' malfunction, was corrected without issue.  So here is that incident: 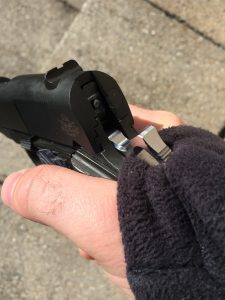 Simulation of the ‘one in a million' event that occurred

It was a cold day on the outdoor range, where long jackets were a necessity and gloves one could shoot with a highly sought after commodity.  We were running a drill where the students fire two quick fire shots.  A drill I typically have the students perform even in the concealed carry class.  One of the students was using his .45 1911 (model is irrelevant).  He had been shooting well all day despite the cold, and the fact that the firearm was relatively new to him.  Perhaps the nice, thick Carhartt jacket was keeping his body warm.  He cranked off two shots which struck the target, and then pulled the gun back towards his body.

As I watched him bring the gun back I noticed there was something odd.  I thought maybe he had a malfunction where the slide might not have gone fully into battery and he was going to slap the back to fix the malfunction.  But then he began trying to rack the slide in an awkward manner.  I couldn't see the entire slide at this point because his jacket sleeve obscured the rear portion, and I was in the process of moving from his left side over to his right,  but I could tell the slide was not locked open.  I quickly moved closer to help talk him through what I believed a simple malfunction.   I moved into a closer position to better observe and assist and saw that his jacket sleeve had become pinned between the hammer, and the beaver tail of the grip safety (See the recreated photo).  The student was in an awkward position.

His jacket was caught in his gun and to the point that he could not free it while keeping the gun pointed down range.   Additionally, the way the jacket had wedged itself into the hammer, the slide was not fully forward and could not be moved to the rear at all.  He tried to engage his manual external safety but because the slide was not fully forward the safety could not be activated.  So he relaxed his hand off the back of the grip and activated the grip safety.  Above all and most importantly he stayed calm as I instructed him to keep the gun pointed downrange.  Because the gun was not in battery, we could not simply point the gun in a safe direction and squeeze the trigger, as this would not fire the round.  So, at this point we had a couple options: 1) rip the sleeve of the jacket from between the hammer and beavertail or 2) manually ‘walk' the hammer forward, by holding the hammer, pulling the trigger and slowly lowering the hammer forward, to release the jacket from the grasp of the hammer.  Additionally at this point, we did not know if there was a live round in the chamber but of course, it was assumed there was.

I had the other three shooters cleared off the line by the other instructor.  With the shooter holding the gun firmly and pointed in a safe direction,  we were able to pull the jacket free from the hungry 1911's mouth.  It did not require a great deal of force, and if it did, this option would have quickly been scrapped; but it did require enough force that attempting to do it by oneself may be difficult.  After the jacket was released, we dropped the magazine and cleared out the firearm.  Functioned checked it to ensure everything was running correctly (which it was).

There were a couple ways the situation could have been handled and as the instructor will have to make that determination based on all the factors.  For me, it was another example of how we have to always be of sound mind when we are using firearms.  Strange things WILL happen because strange things CAN happen.  Whether you are shooting alone, with someone else, an instructor or not, we all need to be aware of what is happening on the range.  I am confident this incident may have been handled differently, and the outcome could have been far worse, had the student panicked or failed to remain calm and listen to instruction.  If you were the student, and been by yourself, unable to physically pull the jacket from the hammer, what would or could you have done?  As long as you remain of a calm mind, you would have all the time in the world (well it was very cold that day, so all the time before hypothermia set in) to come up with your own safe course of action.  What about the considerations if it occurred while you were using your firearm to defend your life?  Many things to ponder and learn from, if we analyze this small incident.

Try and plan for Murphy, so you can avoid most of his shenanigans, but understand he will get all of us at one time or another.  This is just one example of the countless number of potentially dangerous, and unlikely things that can happen.  If you have had a potentially dangerous ‘one in a million' incident while on the range or handling your firearm, educate others and share your story in our forums section.  Together we can make each other safer and mutually benefit as a group.  Stay safe!

6 Responses to When Murphy Strikes on The Range