Should I carry with a round in the chamber? Yes, you should because when seconds count needing to rack the slide is the last thing you should have to do. 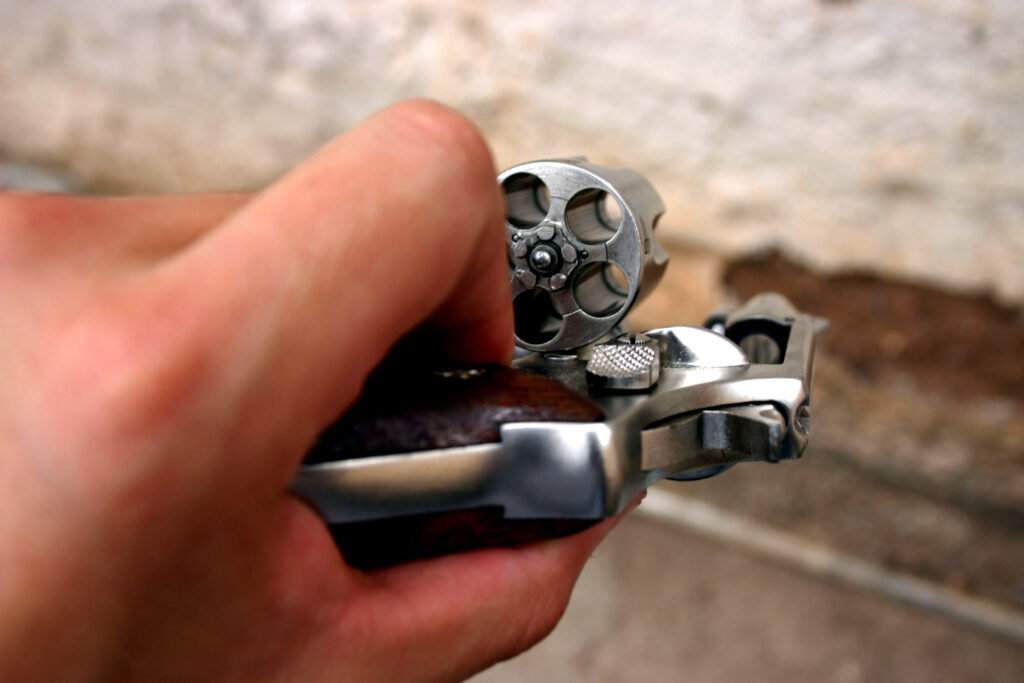 Undoubtedly you have heard (or used) some of these arguments to support your stance on the matter. You don’t carry with a round in the chamber because:

Let me begin by addressing these concerns. As far as the firearm going off inadvertently, there are no doubt mechanical malfunctions with firearms that could cause them to fire without manipulation of the trigger. Recently, a group of firearms was recalled because there was a chance that under rare conditions, if a round were in the chamber and the firearm was dropped, around could be fired. Buying a quality firearm and maintaining it with factory parts, can greatly reduce any possibility that a catastrophic and rare event of the firearm firing without the trigger being manipulated, occurs. Additionally, having a quality holster that completely covers the trigger guard, and that is designed specifically for your model of firearm can keep the trigger from being manipulated and an unintended discharge of the firearm. Focusing on holstering your firearm carefully; and, not allowing strings, bits of clothing, keys, etc., from catching in the trigger guard, will eliminate a dangerous situation where the gun could accidentally be fired.

In a deadly force situation, you are likely reacting to a threat, and thus already at a position of disadvantage. Drawing your firearm takes time no matter how skilled you are. Adding another step, such as, racking the slide to the rear to chamber a round adds what could be an eternity during the limited time of a deadly force incident. Even if you train night and day, there is just no way to be as quick than if you were to eliminate this step.

Carrying a single action (1911 type) firearm, with a round in the chamber and the hammer to the rear can appear very dangerous and truthfully, can look dangerous. Understanding that these guns are designed to be carried with the hammer to the rear and with the safety on, should allow you to have confidence that if you buy from a quality manufacturer, you’re getting a gun that has passed several levels of quality control before it made it into your hands. These guns are designed with internal safeties that ensure that the firearm will not fire on its own. I understand that this is putting your faith in the mechanics of a firearm and that this is probably the most legitimate concern those of you choosing not to carry with a round in the chamber, have. Please do not infer that I am somehow saying single action pistols are not safe to carry. That could not be further from the truth. More single action pistols have been carried, and for a longer period of time, than the modern striker fired pistols. Even over the hundred-plus years, single action pistols have been carried, there has never been an epidemic or cause of concern that carrying a single action pistol is dangerous. Some guns are designed to function with a safety, such as the 1911 style mentioned above.

Some guns have models that come with or without safeties to satisfy different shooters’ preferences. Remember, having a safety on your firearm can be a benefit or be a detriment depending on how you look at it. First off, safeties are mechanical devices that, although rare, can fail. This means that if your peace of mind that you are safe because your firearm has an external safety, your misguided. The way you carry and manipulate the firearm makes it safe or unsafe, regardless if there is an external safety or not. Additionally, an external safety is another manipulation of the firearm you must make before firing at a threat. This could take precious time that you may not have. Having an external safety is not all bad though. Through proper training, the amount of time it takes to disengage a safety can be minuscule and if it gives the user peace of mind to have one more safety on the firearm, then it is definitely worth it.

I have also heard some argue that even one of the universally accepted weapons safety rules state, “Keep the weapon unloaded until ready for use.” This safety rule is 100% accurate, but applying it to a firearm you are carrying to protect yourself in a “deadly force” situation is not correct. When you make the decision to carry that firearm for protection, it should be as ready for use as it will ever be. In a moment’s notice, that firearm must be ready to use against a deadly attack. In this way, it is appropriate (if you desire) to carry with a round in the chamber.

Understanding all that we have spoken about, let's look back at the firearm I chose to carry as my concealed carry gun. As stated earlier, my everyday carry pistol was a striker fired, pistol with no external safety. Striker fired pistols, although technically categorized as double action firearms, have relatively light factory trigger pulls. On average the factory trigger pull on these firearms is in the range of 5-7 pounds. Besides the safety trigger, (that little paddle-like device built into the trigger that must be depressed for the pistol to fire), has no external safety. Considering all this, I choose exclusively to carry with a round in the chamber. I use an appendix position carry with a hybrid holster designed for my model of firearm. My trigger guard is completely covered and my firearm does not come out of the holster or get manipulated at all. I practice drawing my firearm from the very holster I carry every day. I practiced hundreds of times with an unloaded firearm until I could ensure that I was not inadvertently squeezing the trigger before the muzzle cleared my body. I mention all of this because it takes time and practice to become confident that you will be safe throughout all aspects of carrying your firearm (holstering, carrying, and drawing). I chose to carry my firearm this way because it is what I felt afforded me the quickest response time. I trained to a point where I felt confident that I handled and carried my firearm safely. Let me just remind you that I do not advocate a “one size fits all” concept to firearms training. If you choose a different way to carry you are not wrong, you have simply weighed the pros and cons and made your decision based on your confidence and comfort level.

Still on the fence about carrying with one in the chamber? Understandable, and if you’re not comfortable, you absolutely should not carry with a round in the chamber. Here is something you can do to gain some confidence in carrying your firearm with a round in the chamber. Carry your firearm unloaded, or loaded with dummy rounds/snap caps (one in the chamber is fine here). Ensure your trigger is set and has not been pulled to the rear. In other words, have the gun cocked and ready to fire for striker fired type guns, or have the hammer to the rear and the safety engaged for your single action 1911 type firearm. Carry your firearm like this for several days and while performing routine actions and even those you may find to be more at risk for inadvertently firing a round from your firearm. In a safe location, and while pointing the firearm in a safe direction and only after ensuring the firearm is unloaded or only loaded with snap caps, practice drawing your firearm from your holster. At the end of the day, or more often if you wish, inspect your firearm. If the trigger was inadvertently pulled, you will be able to tell, by seeing the hammer forward or the trigger pulled to the rear on your striker fired pistol. If after doing this for some time, and observing that your firearm did not inadvertently fire, you may gain some confidence that you have an appropriate holster, and that you are manipulating the firearm in a safe safely enough, not accidentally squeeze the trigger.

Ultimately, the type of firearm you carry and how you carry is a personal choice that should be made based on your personal confidence and understanding of your firearm. While my suggestion is that you carry with a round in the chamber, I do not advise you do it if you are not confident with your firearm, or if after considering everything you do not feel safe doing so.

double action, round in the chamber, safety, single action