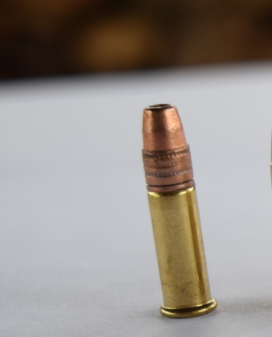 What follows is a bit of news, followed by a bit of assessment in a new series we're doing.

A man from Lake City, Florida stopped a burglary-in-progress with his .22 caliber pistol. This man, who we'll just call “Homeowner” is the hero in this story. I don't have his actual name.

The burglar has had prior run-ins with the law in multiple counties and is identified as 32 year old Elbert Gilliard IV. This time around, he was found inside the house of the Homeowner, but it isn't entirely clear what he was trying to take. Some things were out of order, to include a hunting knife, a couple rifles, and the keys to the truck.

The Homeowner found Gilliard in his house at about 5:30pm, last Wednesday and pulled out his .22 cal pistol. He attempted to hold the criminal at gunpoint as he called the police.

This attempt failed and Gilliard ran. The Homeowner followed him outside.

Police found Gilliard and were able to identify him based largely on his enormous facial tattoo. Police did a walk through with the Homeowner and found things (like the guns) out of place and clothes strewn about.

Gilliard, who did previous stints for battery on a police officer and resisting arrest, is currently in Columbia County Jail with a $190,000 bond.

That was the news, here is the assessment.

While the details on some of what we're going to talk about are a little thin, there are some things we need to discuss so we're more prepared should a similar situation happen to us. But again, we don't know exactly what happened and are forced into speculation to at least some degree.

I would not likely have used a .22 pistol. The argument can be made that maybe the Homeowner had to use a .22. For medical reasons, this could be true. But that could be why the bad guy took a chance at running. Maybe he recognized it as a .22 and thought that if he gets shot maybe it won't be as bad.

Again, I don't know and it is only safe to make these assumptions while trying to learn and prevent ourselves from making mistakes.

There is another aspect of why using a .22 may not be the best idea. A .22, most of the time, is a rim fire cartridge. Statistically speaking, rim fire cartridges have a higher fail rate than just about any center fire cartridge does. While they have gotten more reliable over the years, so have centerfire calibers, and they're almost always a better bet.

The other thing I want to talk about before I let you get on with your day, is that the Homeowner ran after the bad guy as he fled. This is bad for a multitude of reasons, with the first being: You have no idea what awaits you on the outside. Criminals travel in packs a lot of the time. Could there have been someone else outside?

Or, in this situation, the Homeowner found out later on that his rifles were moved. What if he stashed one outside and grabbed it as he ran? What if Gilliard then took cover behind the truck outside and opened fire? It's rarely a good idea to bring a pistol to a rifle fight, and an even worse idea if you've only got a .22.

As I stated earlier, everything worked out just fine here, but this is just one scenario and yours may happen differently.

Next, I urge you to do a couple of different things. First, this happened in the home. And, because it did and the chance that your scenario if you ever encounter one, will also be in the home, it's a good idea to know how to defend yourself properly.

Check out our Complete Home Defense Course to help you prepare for the worst.

Second, while a shot wasn't even fired during this whole scenario chances are good that you may have to fire a shot. If you do, it's best to have an advocate on your side so we recommend that you compare the concealed carry insurance programs out there, on our chart.

Leave your thoughts on this story or anything I said in the comments below.

One Response to Burglary Stopped With a .22