If you have been shooting firearms for some time, it is almost impossible that you have not heard of, seen, or shot a 1911 pistol.  The tried and true, longest running handgun design in existence.  The 1911 purists believe that a 1911 in any other caliber than .45 ACP is as wrong as putting lipstick on a pig and trying to pass it off as a super model.  However, with firearms manufacturers trying to stay up to date with changing demographics and cutting edge ballistics, the 1911 has been produced to fire nearly every major pistol caliber.  This isn't necessarily a bad thing, especially as the cost of .45 ACP ammo seems to rise as if it was plated with 24k gold.

More written review below the video!

You may have heard of the Philippines based gun manufacturer, Rock Island Armory (RIA).  What you may not know is that they produce more 1911’s than any other gun manufacturer.  In walks Fred Craig, a custom gun maker, who created an affordable, super high velocity pistol cartridge that would work in the 1911.  The result was the .22 Magnum, a center fired, .22 caliber high velocity cartridge.  Teaming up with RIA seemed to be a logical pairing.  The round developed further and was rebranded as the .22 TCM.  The name TCM came from combining the names of the president of RIA, Martin Tuason, and .22 Magnum designer Fred Craig .  The result, the  Tuason-Craig-Magnum, or TCM.  The TCM is a .22 caliber center fired cartridge with a 40 grain hollow point projectile.  The projectile is fired from a handgun at 2000 feet per second.  Yes, that is blazingly fast, and considerably faster than .22LR and other handgun calibers.  The speed of the cartridge comes from its design.  Imagine combining a 9mm casing with the neck of a .223 and sticking a .22 caliber projectile in it.  That extra powder charge and necked down design allow the projectile to reach these super high speeds, even in a pistol platform.  And surprisingly, even while producing all the speed and pressure, the great 1911 design handles the recoil like a dream. 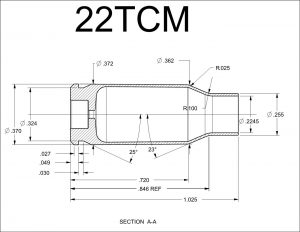 When I had the chance to get my hands on this new cartridge and designed 1911 firearm, I jumped at the opportunity.  I ordered RIA’s TCM TAC ULTRA MS COMBO 1911 pistol.  This is the mid-sized version as indicated by the MS in the name.  The mid size is slightly smaller than the standard sized 1911, with an overall length of 8” and barrel length of 4.25”.  The firearm comes with the.22 TCM barrel and a barrel to fit the common 9mm cartridge, making it super versatile.  Because some of the .22 TCM casing’s dimensions closely resemble the 9mm casing, the magazines are interchangeable and can be used with both calibers.  The only modification needed to fire the two calibers, is changing out the barrel and recoil spring.  Pretty cool, right?  Additionally, the great RIA workmanship and quality is evident in these firearms.  My TCM came from the factory with incredible VZ G10 grips, and a top notch set of fully adjustable rear sights and fiber optic front sight.  The trigger is fully adjustable for travel and take up, and the controls are nicely checkered.  The finish on the TCM’s are parkerized, but I imagine they may produce different finishes eventually.

Taking the firearm out to the range was a blast – literally.  As you can imagine, a cartridge that produces that much speed and pressure, also produces an impressively large muzzle flash.  If after looking at the muzzle flash you don't have an amazing grin, you should have your pulse checked, because it is truly remarkable.  Not only is the muzzle flash impressive but the sound and concussion from shooting the cartridge is powerful.  It is a deep boom rather than a higher pitch, crack typically associated with handgun cartridges.  These two factors can be a pro or con depending on how you look at them.  The muzzle flash is a necessary byproduct of firing a round that fast, however, shooting this firearm in a low light situation could make it hard to keep your low light vision in tact.  Is it a deal breaker?  Probably not, but something a tactical shooter might consider.  Also the loud report may initially intimidate a new shooter, compared to your 22LR cartridge.  However, after shooting the gun and feeling the ‘next to nothing’ recoil, the sound is really a dead issue.  In fact, it actually just really makes the gun extremely FUN to shoot.

I was impressed with the accuracy of the sights out of the box.  Especially because I did not have to adjust the sights between calibers.  I could have dialed them in a bit more when taking it out to about 25 yards, but was still able to easily hit an 8 inch target.  Reliability was not an issue.  As anyone who owns a 1911 knows, there can be an initial ‘break in’ period, before the gun runs optimally.  During testing, several other shooters (male and female), and I, shot around 600 rounds through the pistol.  We used 350 TCM and 250 9mm rounds.  Over that time, I experienced 1 failure to feed with the 22 TCM round and zero failure to feed with the 9mm.  The slide failed to lock back to the rear on an empty magazine a few times with both the TCM rounds and the 9mm rounds.  I cleaned the gun once about halfway through the testing period.  I found the cartridge to be extremely reliable and had no malfunctions due to the cartridge.  I was able to locate several stores in my area that carried the .22 TCM cartridges.  They did not have huge quantities, but the cost was not excessive and less than .45 ACP.

I didn't run a penetration test on the ammunition, as there are several extremely precise tests done with the ammo.  From those tests, over-penetration does not seem to be an issue.  This is important because while .22 caliber is not the ideal self-defense caliber for everyone, the 22 TCM’s ability to produce nearly zero recoil in a firearm (that is simple to rack and operate), may be appealing to some shooters.  I am a firm believer in the idea that a high volume of well placed shots, regardless of caliber, are much better than one shot from a larger caliber firearm.  I say this because an inability to manage recoil may result in the shooter not being able to get subsequent shots on target.

Will the .22 TCM round replace the 9mm or .45 ACP.?  I can safely say, probably not.  Those cartridges have become the industry standard calibers and no matter how expensive the .45 ACP becomes, people will love it and will continue to buy it.  Is the .22 TCM round a ‘flash in the pan,’ ‘here today, gone tomorrow’ wildcat round?  I am not a betting man, but I see a definite path for the .22 TCM round to be a game changer in some applications.  The .22 TCM round can be shot from rifles, which also is very intriguing.  The innovation and design of a 2000+ feet per second pistol round, if nothing else, is exciting and unbelievably fun to shoot.  If you have an opportunity to get your hands on one do it.  The Rock Island Armory TCM 1911’s are versatile, beautifully built handguns, at a terrific price point and they are just a joy to shoot.