I met Eddie Massaro of Massaro Holster Works at the USCCA Expo 2019. He wanted me to take a look at his hybrid holster called the American Purebred. It's made of Kydex, neoprene, and designed primarily for traditional inside the waistband (IWB) carry.

This means carrying in the 4 or 5 o'clock position. I carry appendix inside the waistband (AIWB) about 99% of the time, but Eddie's holster design was interesting enough I thought I would give it a go.

He gave me one for my Sig Sauer P365, and asked me to take it home and give him some honest feedback in a review. So after nearly 2 months of wearing it off and on here is what I think of it.

This is a hybrid holster, made of a Kydex shell that uses Velcro to attach to a vented, neoprene backing. It has two thin, metal belt clips that are different from other holster clips I have seen.

I am generally not a huge fan of most hybrid holsters. I find that after time, the backing material can push in from the backside somewhat collapsing the holster, or the sweat-guard portion of the leather can fold over the mouth of the holster. Both of these problems can cause potential safety issues with holstering.

But some backing is beneficial when carrying in the traditional IWB, or even small of back (SOB) position because it helps distribute the pressure across your waist. In the appendix position, a backing material is not necessary because your abdomen is soft.

The American Purebred is totally different.

Where The Purebred stands apart from other hybrid-style holsters is that the Kydex shell wraps completely around the gun, so there is no concern of the backing material pushing in from behind.

Also, the neoprene backing does not extend up to create the sweat guard. Instead, the Kydex forms the sweat guard keeping the mouth of the holster to stay open. It may only be a couple of months of a testing period, but the backing is holding up well. 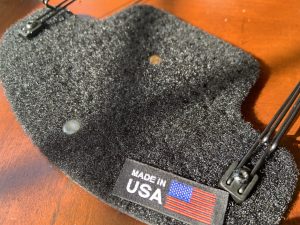 The backing material's front is velcro, with the backside made of neoprene.

There is definitely some thought that went into designing the Kydex shell. In the photo, you can see there is a noticeable angle built into the design. The angle acts similar to a concealment wing, by forcing the grip of the gun towards the body.

This ultimately aids in concealment.

They also cut a notch in the bottom corner of the holster. I was told that this notch is cut into the holster to allow the stiff Kydex shell to flex somewhat under the pressure of being carried IWB. The idea is that it would reduce the hot spots that can occur with an all Kydex holster in the IWB position.

It is cut appropriately around the trigger guard area, allowing for a high shooting grip. I did notice some hard angles on the Kydex holster, and the edges could use a little love and get buffed round instead of flat, but these are parts that won't really touch the skin.

I am not quite sure this holster would work with suppressor height sights, and mine isn't cut for an optic (though they have some on the website that are).

My experience with the holster is that the angle does what it is supposed to do and makes a difference in concealment when compared to other hybrid designs. It is hard to say if the relief cut makes a huge difference, but the holster is very comfortable so it's possible it is a factor. 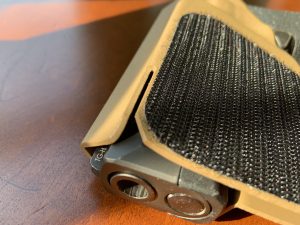 This relief cut is there to allow the Kydex to flex and reduce any hot spots of discomfort.

A complaint about hybrid holsters, in general, is that the backing material makes me sweat because it does not allow heat to escape. Leather is probably the worst in this regard, but a solid neoprene backing would be just as bad.

The backing on this one is vented with lots of holes but I was still worried that the rubbery material would just be unbearably hot and sticky against my skin.

I wore it while doing yard work outside and other activities where I got hot and sweaty. I was pretty sweaty underneath the holster, but even without a t-shirt between my skin and the holster, I didn't develop a rash and it didn't feel uncomfortable.

This may be due to the venting holes, and possibly because the backing material is not very large. 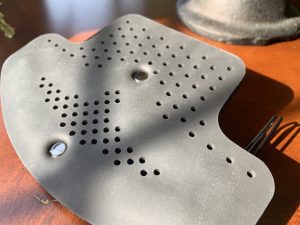 The neoprene backing seems to be holding up well after a couple of months of carrying.

The neoprene backing also aids in comfort. Instead of carrying the full weight on the belt, the full surface of the backing grips onto the body. This spreads the full weight of the gun across a larger area, as opposed to just the belt. It also keeps the holster in place which is also important for comfort and proper concealment.

Now I mentioned the Kydex shell sticks to the backing with Velcro. I'll address the first concern, which is that the shell could be pulled from the backing material and you could lose retention of your gun. Gun retention is super critical, and the holster design is part of the equation.

First, the Velcro is extremely strong and it covers the entire face of the neoprene back, as well as the entire back side of the Kydex shell. Secondly, this is designed as an IWB holster. With the pressure from the belt and waistband pressing on the outside of the shell, I can't think of a realistic situation where the shell would be separated from the backing.

A benefit of the holster using Velcro is that it allows for almost limitless adjustment of cant and ride height. Not only that, but you can move the holster toward one of the clips if it feels better, rather than having the shell positioned exactly in the middle as is customary. 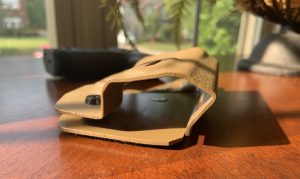 The cant that is built into the Kydex shell twists the grip on the gun into the body, to aid in concealment.

The holster's clips stand out because they are different from any other holster I've seen. They are made of stiff, steel wires, and attach to a stiff liner inside the backing with one Torx screw.

The pros of the clip are that they are very minimalistic and hardly noticeable if seen on your belt. They do have a positive hook on the bottom that stays attached to the belt. I twisted and torqued on the clips quite a bit and they didn't break from the backing and after bending them, they mostly snapped back into shape.

They could be bent if that's what you wanted to do with them, but through regular use, and even me forcefully ripping the holster off my belt (you can see in the video), the clips held on tight.

Although they held up surprisingly well, if there is a weakness with the clips, it would be that they're attached with that one small screw. 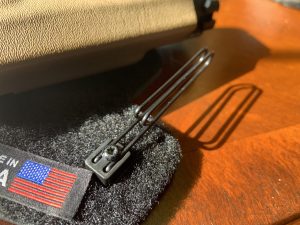 The unique clips on this holster have pros and cons.

In the past when I tried to carry traditional IWB, it was just uncomfortable and the gun printed too much for my liking.

Not so with this Hybrid Holster. The Purebred was really comfortable and didn't make me as hot and sticky as I anticipated. I didn't have any hot spots on my hip bone, and the holster stayed in place, which is great.

I really liked the low-key look of the clips and the fact you are able to tuck your shirt in is a plus. And while the clips passed the brief ‘torture testing' I put them through, I think a more substantial clip would make me feel a bit more confident.

I will not confirm nor deny that Eddie may be working with a prominent, clip-making company and offering the holster with an alternative clip option. Speaking of options you can get the Purebred Holster for any Glock, most SIGs, the newer CZs, and Springfields in the following colors: black, OD green, or tan.

The holsters are made here in my home state of Ohio and are a good price at $70 dollars. If you're interested in checking the American Purebred Holster, or their all-Kydex Liberator, head over to their webpage.