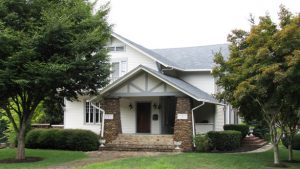 Okay, let me say it early on, I don't walk into a place and say that I'm carrying a gun. That would defeat the purpose of concealed carry and retaining my element of surprise against an attacker. Instead, this blog is about learning and teaching others, and a lot of the time I get odd responses when I say I carry in these places.

And of course, I feel as though I need to say that you should only carry a gun if you are legally allowed to do so and we can in no way ever tell you to do something illegal.

Yes I'm one of those guys who carries a gun in the relative safety of his home. The main reason why is because 100% of all home break-ins happen in someone's home. And, if it's my home when I am home, I'd rather be able to defend myself and family before any bad guys kill us.

The way I see it is that I “try” to get up in the morning and strap a gun on. Things don't always happen that way because our puppy decides to wake up at 4 in the morning and when I'm running downstairs in my sleep clothes, I haven't gotten the gun on me at that point.

And even then, when I'm unarmed in my house I'm never more than a few feet from a quickly accessed firearm should the bad guys break in when I'm less than ready.

Any number of bad things can happen when you're inside your home and this is amplified as the holiday season is rolling at us like a freight train without brakes. One of the most common methods of bad guys getting into your home is when they pose as someone who is seemingly supposed to be there, like a delivery driver.

Never let your guard down to anyone.

I never used to carry a gun in my home until I saw a video of a man posing as a UPS driver who forced his way inside a house. The homeowner opened the door and then called over to about 4 or 5 of his criminal buddies who also went inside, and then did who knows what to the family inside. That's not a chance I'm willing to take.

We offer a course called Complete Home Defense that is perfect for anyone looking to up their home defense strategies and it goes very far into depth on just about anything you'd need to know about defending your castle.

You can learn more about it, here.

If you've been reading my work for a while you know that I'm a huge proponent of vehicle carry. I recommend not just having your gun in your car, but also carrying it on your body. I recently wrote an article about this, here, and don't plan to re-hash the reasoning behind my stance.

Instead, my goal with this article is to say why you should consider having your gun in your car with you (yes, preferably on you, but again not my goal).

The bottom line is that people in their car are often distracted by something. If stopped at a red light for example, what's the first thing most people do? Check their phones.

The moment you reach for your phone and open it up you also open yourself up to an attack that you don't necessarily see coming.

A carjacking is a very real danger in many areas, some worse than others, but there are idiots who want other people's stuff everywhere in the world and the best defense is an aware mind and a firearm on your side.

I won't go much more into detail on this so I'm not beating a dead horse, but we also offer a course on this topic, as well, that centers around vehicle defense. It's very good and shows you tactics as well as what happens when a car is shot by actual guns with real bullets at different angles.

You can check it out here.

Getting used to carrying in either of these places can be difficult. Many people don't feel as though they need to carry a gun in their home because of the relative safety surrounding it. But, it's not a bubble floating off on its own somewhere. Your home is likely to be at least somewhat available to the public and can be broken into at any time.

Having the ability to protect yourself, before the need arises, is important if that need actually comes.

And, if you're in the car you should also be armed because you're out and away from the relative safety of your home and can be a target just because of the car you're driving or if you're really into your phone.

Do you carry your gun in either of these places? Let me know in the comments below.