Uncontrolled rage and illicit drugs have something in common. People under their influence sometimes do dangerously stupid things. This video shows an out-of-control woman threatening people with a simulated handgun.

Beyond presenting a visible lesson about why meth (yeah I'm speculating) is bad, this video provides an opportunity to discuss why threatening the use of a firearm, whether you actually are, is generally a poor plan. 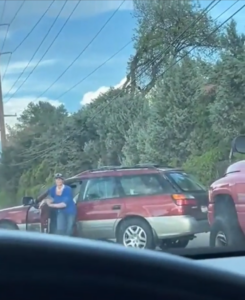 Can I use deadly force against someone who just threatens using a gun?

The answer to the above question is situationally dependant, so we can't answer simply, yes, or no. But we can say for sure, in some situations, it may be reasonable to use deadly force against someone who is merely threatening to use a gun, even if you don't see one.

If the aggressor makes movements that look like they are drawing a gun or holding an object under their shirt or coat, while saying they have a gun, could bolster a case of reasonableness.

However, we can't forget that much more goes into a legal use of defensive force than just your observations seem reasonable to you. Your state may have a duty to retreat law, and if you're the primary aggressor, you can also lose your self-defense justification.

So what about the incident we see play out in this video?

Is there any question what the woman wanted to convey with her gestures, words, and posture? She purposefully blocked traffic with her vehicle and aggressively approached other motorists inside their vehicles. She screamed, made angry facial expressions, held out her hand for others to stop while screaming “turn it off”, and placed one hand on her waist behind her hip, where many people carry a concealed handgun.

Given all we see and hear, it's reasonable to think the woman has a firearm. The question on if she is going to use deadly force is a more subjective one. A call that I'm not willing to make unequivocally given the brief video.

The person recording assesses the situation and thinks the woman is a threat, but maybe not a deadly threat. The driver avoids the woman and drives away without crossing into oncoming traffic or placing themselves in increased danger. This was wiser than shooting through the car's windshield at the crazy woman.

Let's not forget, the vehicle is also a weapon. 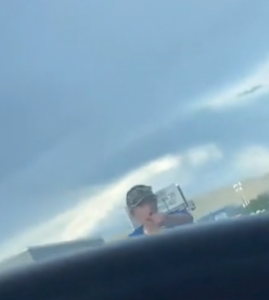 The one recording repositioned their vehicle to leave, and the woman moved in front to block their escape. At this point, the woman is escalating the situation and doing more to keep people from leaving.

As I put myself in the driver's shoes, I suspect if the person had brandished a firearm, and pointed it at me or others, instead of simulating it, running them over seems like a more appropriate action. I mention this only because these actions show threats of deadly force against other people that couldn't flee because of their being blocked in by traffic. It also takes it from speculation to confirmation and shows an imminent deadly force threat.

Let's flip to the other side of the coin. Often in basic concealed carry classes, students ask about the legality of announcing to someone else during a confrontation, they have a firearm. Most of the time, the question goes something like this:

If I'm in public, and someone is threatening me with violence, but I don't see a weapon, is it legal for me to place my hand on my gun and say—stop, I'm armed, don't come closer?

The answer to the legal question is relatively straightforward. You can use reasonable force to stop someone from assaulting you. Telling someone you're armed and they should stop advancing is reasonable against someone who says they plan to harm you, and they can actually carry out the threat. 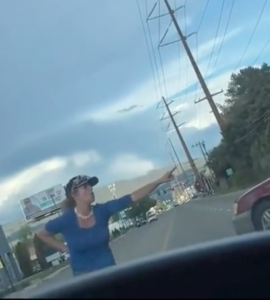 The question about if it is wise to announce you have a gun is much more situationally dependant.

People sometimes believe that saying they have a gun (whether or not they actually have one) will stop the attacker in their tracks.

Sometimes it actually makes the problem worse because the person you're dealing with isn't acting rational or afraid of being shot.

Put yourself in this hypothetical situation. You yell at someone in the parking lot, but don't threaten them with a weapon.

The person says, “Hey, I'm armed, back away,” and motions in a way that shows they are drawing a gun. Is it reasonable to perceive them as an imminent, deadly threat and use deadly force yourself? Probably.

The point is, if you threaten to use a gun and simulate a draw (even if you're trying to de-escalate an incident), the person may reasonably perceive you as the deadly threat, and may use deadly force against you. They may even be justified.

A good rule of thumb is: draw the gun or make threats of using a gun only when you would be legally justified in actually using the gun. If you read the situation and decide you can't yet use deadly force, but want to announce that you're armed, it's wise not to combine the words with motions that make it seem like you're drawing the gun. 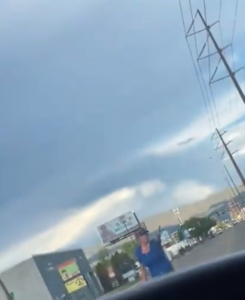 For example, let's go back to our hypothetical situation. You yell at the person in the parking lot, but don't threaten them with a weapon. They say “Hey I'm armed, back away.”

But this time, they don't reach toward their waistband like the example above. Instead, they kept their hands up at head/ shoulder/face level, in a defensive position.

This isn't an exhaustive post about all that goes into a legal use of deadly force, in self defensive. For that, I highly recommend you check out a book called The Law of Self Defense Principles by Attorney F. Branca as a resource. The book is easy to understand and gives incredible insight into self defense law and what actually matters. 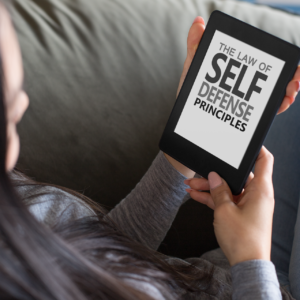 To get a taste of what I'm talking about with Andrew's book, check out some of his guest appearances on our Concealed Carry Podcast. In these episodes, we talk about many aspects of self defense law and answer a lot of questions.

Episode 148: Stand Your Ground – Self Defense Law with Andrew Branca

Episode 440: The Gray Area – When You Can Make Threats With A Gun

If you find these posts helpful, please consider leaving a comment and sharing them with your friends. We publish content to educate, as well as challenge people to think about their responsibilities and actions in being a responsibly armed American.