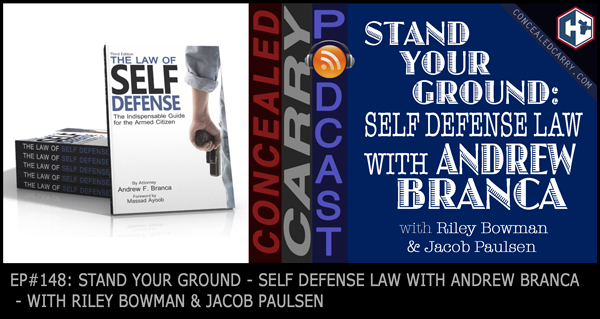 Topic: Stand Your Ground – Self Defense Law with Andrew Branca

Riley and Jacob had the privilege of interviewing Andrew Branca, the top attorney in the U.S. for all things self-defense law. Andrew is the author of the book The Law of Self Defense and is an experienced attorney who teaches at the FBI's National Academy, has taught at Sig Sauer Academy, appears on the Outdoor Channel's TV show “The Best Defense”, and writes extensively for websites and blogs online including the National Review. He is often quoted as a subject matter expert on use-of-force law by major national print and broadcast media. He regularly consults with attorneys across the nation on various self-defense cases. In this episode we get into “Stand Your Ground” law, “Castle Doctrine”, “Make My Day”, how to deal with law enforcement and the consequences immediately following a defensive gun use. Don't miss it!! Press ‘PLAY' above to listen now!

Andrew Branca, castle doctrine, Defense Attorney, Law of Self Defense, make my day, stand your ground, Use of Force

4 Responses to Episode 148: Stand Your Ground – Self Defense Law with Andrew Branca