Sitting in a vehicle places you at a tactical disadvantage against an attacker.

As concealed carriers we have our firearm on us, knowing the odds are we will never have to use it. We practice and train for an incident we pray never happens. But because of obvious logistical issues, the vast majority of concealed carriers have a huge void in their skillset. That being techniques and skills to better your chances of surviving a carjacking. With ConcealedCarry.com's Vehicle Firearm Tactics course soon to be released, I thought it would be appropriate to share my personal story of when I was carjacked. A story that only a handful of people know.

I grew up in Cleveland, and in 1997 I was a rebellious 21-year-old. At the time my friends and I frequented a bar whose regulars were bikers, vets, punks, and greasers, reflecting my social circle at the time. I agreed to give a female friend a ride home and we left the bar at around 2:00 AM. We walked to my F-150 which was parked on the street about 100 yards from the bar, climbed into the truck, and closed the doors. I set the keys on the center armrest and was ready to take off the jacket I had on when I heard the passenger-side door open and the interior light went on. When I looked I saw two young men one of which was extending a gun toward my friend and me.

While one bad guy held us at gunpoint, the other started to grope my friend. First telling her not to make a sound or they would shoot her in the face. The language quickly escalated into telling her the vulgar things they were going to do to her after they kidnapped her. After she rebuffed the invitation by spitting on one of them, the guy holding the pistol struck her in the face with it. Almost at the same time, I heard a metallic rapping on the driver's side window. When I turned to look, my door was being opened by another male holding a gun in his outstretched hand. 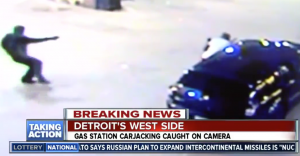 We have a false sense of security and protection when we are in our vehicles.

While pointing the gun at my face, the third male told me to give him my money and car keys. I told him that I had no money, and spent it all in the bar (which happened to be the truth). I tried to remain calm, and move slowly thinking that the people I could now see coming out of the bar would notice what was happening. Unfortunately, they didn't, and now I could hear the other two males tussling with my friend halfway inside the vehicle.

My friend said “don't take those” and I looked over and saw my truck keys which had been on the center armrest, now in one of the male's hands. He said “I got the keys man” and backed away from the truck. I saw him start to walk around the back of my truck toward my side and the other male who had been assaulting my friend had stepped away from the truck, distracted by the fact that his accomplice was walking around to the other side.

I knew this was the tipping point. I felt I had to act because the situation was getting more dangerous with every second that now passed. Waiting and delaying was not going to save us now. At the time, I carried a spare ignition key on a chain that was attached to my wallet. The bad guy, who had been demanding my money, stepped away just for a second as his friend was walking over with my keys. I took the opportunity to put my spare key in the ignition.

Being that it was a manual transmission, I pressed in the clutch and put the car into first gear. In a low voice, I told my friend to close the door, and she was able to slam it shut and hold it closed. With that, one of the two males who were on my side and still holding the door open stepped in toward me. I punched him as hard as I could in the face. He stumbled back, long enough for me to crank over the engine and release the clutch.

The truck lurched forward and I sped toward the front of the bar where my friends were congregating. We got some ice for my friend's face from inside the bar, and I took her home. I never contacted the police, thinking at the time, “what really are they going to do?”

The most recent statistics related to carjackings show that the majority of attackers used a weapon during the crime.

I mostly discounted the incident and moved on. After all, I accepted the risks that came with frequenting shady areas and tussling in the rough parts of town. When I became a police officer I responded to, and investigated crimes. I watched hours of surveillance videos showing carjackings. Every night on patrol, I felt the tactical disadvantages that sitting in a vehicle creates. All of this got me thinking about my incident.

I compiled some basic things that can better your chances of not becoming a victim of a carjacking, and lessen the tactical disadvantage that comes with being trapped inside the vehicle. 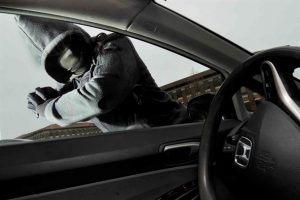 There are some simple tips that can give you a better chance of coming out on top during a carjacking.

The Bureau of Justice Statistics shows that 74% of the bad guys used a weapon while committing the crime. With 38,000 of these crimes being reported a year, it is something we should all be aware of. The problem is live-fire training specific to carjackings is specialized and expensive.  Even if you can't get to a live-fire class on the topic, you should at least work the above considerations into your routine.

14 Responses to I was Carjacked, Here’s What I Learned