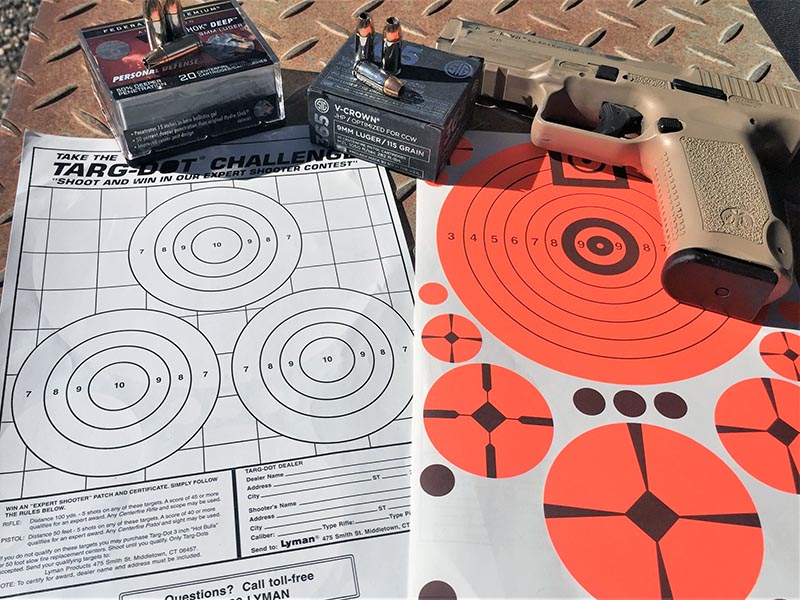 These stick-on targets are handy for lots of practice, but it was the back of the card that caught my eye.

This was going to be another article about those drills I love so much: Mini-challenges that pit you against you in a test of accuracy and/or time. There are a lot of drills out there that took me as much as six times to ace, and that six-timer one represents at least three range sessions. Success isn’t worth much if you haven’t worked for it, after all.  But today, I really did throw up my hands and decided to sleep on the issue for a while.

Why are drills important? Why risk failure in front of friends? If you’re only carrying a gun for self-protection, why bother about accuracy?

I believe it’s important to know the performance envelope of both yourself and your firearm, separately and as a team. A lot of concealed carriers believe they’ll never have to make a precision shot, and therefore don’t have to practice. 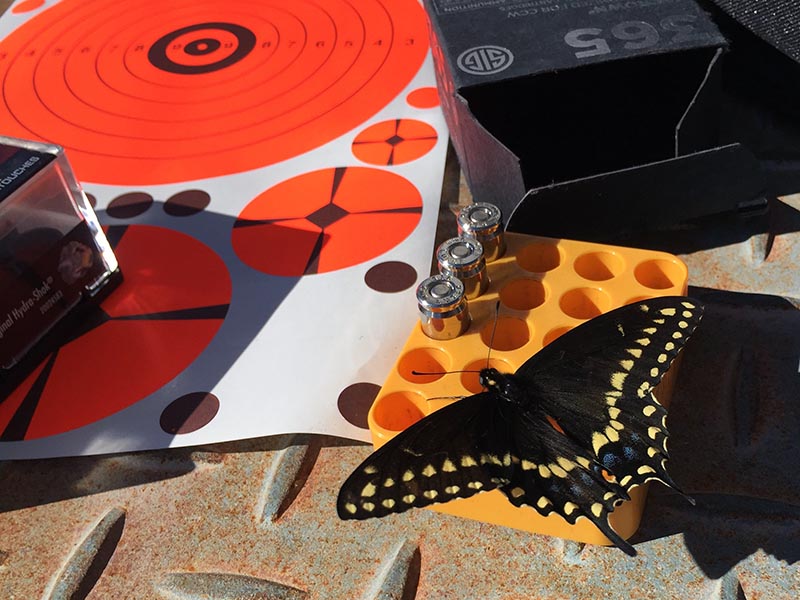 It's not every day a little pal shows up to remind you there are more important things than a bruised ego.

But what if that day arrives when a hostage-taker has your loved one at gunpoint? Do you have not only the knowledge of from what distance you can make a shot into that triangle of soft tissue area that’s headlined by the eye sockets and underscored by the nose?

How far away can you effectively strike a target the size of an average human torso? Do you know how many seconds it takes you to make that shot from that distance, without “warmup” shooting? If your accuracy falls away after seven, 15, 25, or whatever number of yards/meters, do you have a sense for gauging that distance without the help of a measured range?

If you’re carrying concealed, these are things you should want and seek to know, as well as test on a periodic basis!

For all the preceding philosophy and for someone who ’s comfortable hitting a torso at 50 yards and a basketball-sized target at 25, this new challenge was a humbler—yep, there’s a drill named that too. The difference is that I passed that one. 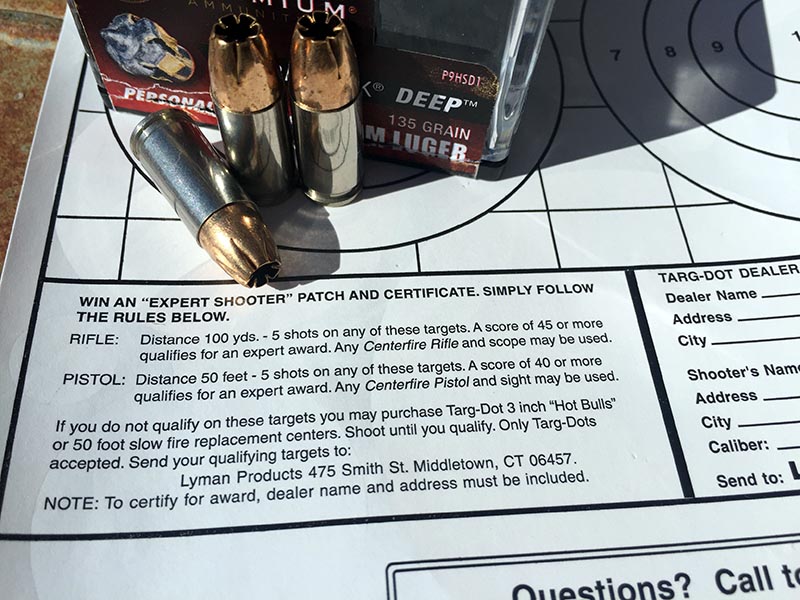 On the back of a pack of stick-on targets from the local gun store, I saw this enticing announcement: TAKE THE TARG-DOT CHALLENGE. SHOOT AND WIN IN OUR EXPERT SHOOTING CONTEST. And the award: a patch. I have a thing for patches. It was ON.

The challenge applies for both rifle and pistol shooting, with different distances and scores required for each. For pistol, the targets must be fired on from a distance of 50 feet. There are three bullseyes provided on the card, with typical graded scoring rings. Five shots on those rings must total at least 40, using a centerfire pistol.

The entire target is three inches. All five shots being in the “8” ring or better–a two-inch group–would yield a passing score. A shooting position isn’t specified. 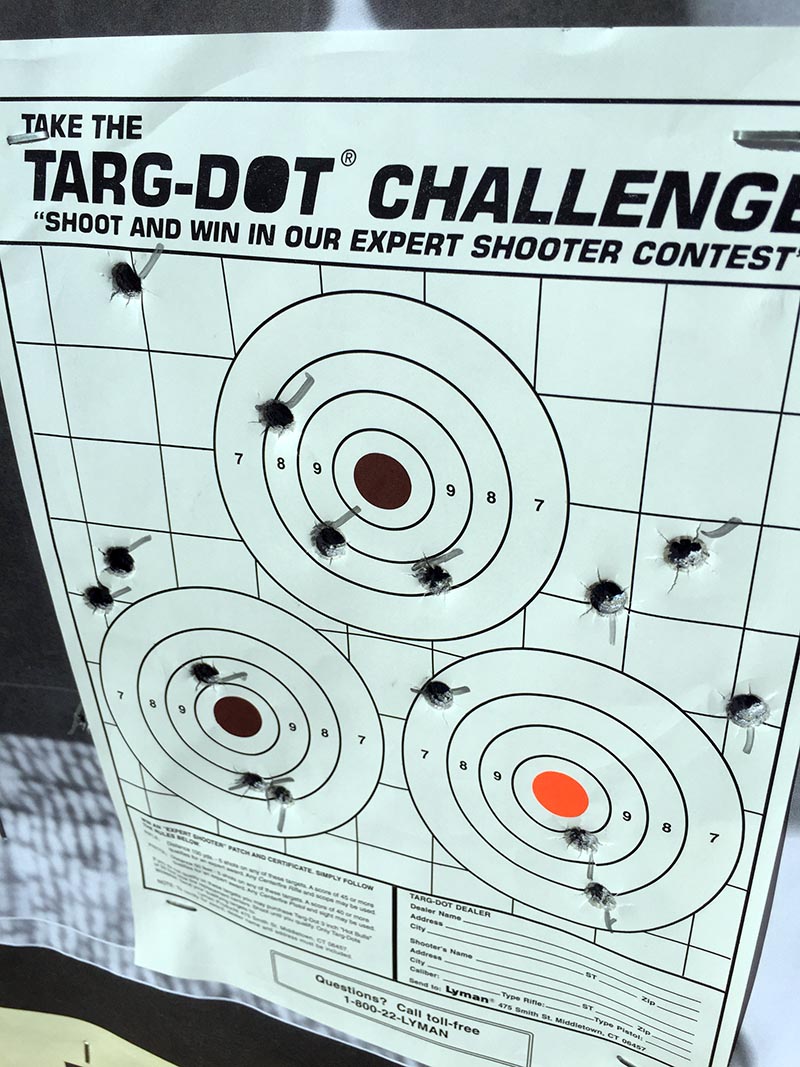 I went into prone for the greatest stability on my first attempt. Though the target was stapled relatively low, I still had to bolster the butt of the gun to the ground with my support hand. I soon realized the target was basically invisible to my usually good-enough vision.

Using the smallest Targ-Dots from the front of the sheet, I covered the 10 ring so as to make it more visible. It worked marginally better. The five-shot score: 25. It seemed logical to use the next largest Targ-Dot sticker to make the bullseye even more visible, but that size covers the boundary of the “10” ring.

Thinking a braced kneeling position might serve me better, I tried again, once with the same and once with different ammo. My best attempt netted a 27—a long way from 40. 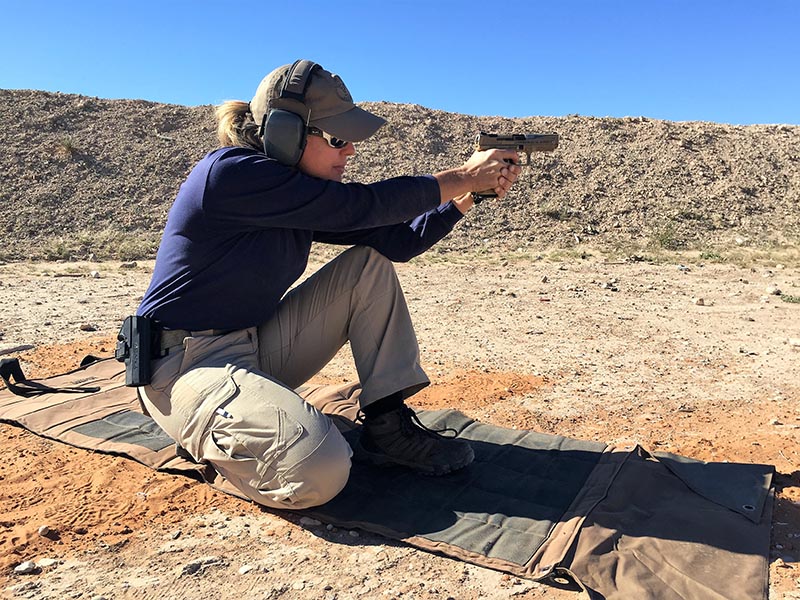 When prone didn't go so well, I tried kneeling.

I hung this project up for the day. My next strategy is to make copies of the target, and experiment with coloring in more rings, hopefully to give me a point of aim I can actually see without putting the gun down to re-locate the target as I was doing even with the tiny Targ-Dot sticker.

Whether the Lyman folks would consider a colored version of their target submitted for the challenge as acceptable, I’ll eventually find out, and report back here.

For now, my take-aways are to understand the limits of my ocular organs when taking on projects such as this, and to remember how really low a target must be to get the most support out of the rollover prone position at a mere 15 yards. And finally, lay off the coffee before attempting this exercise again! I’m not sure my eyes were the only physical hurdle I took to the range this day.

Those aren’t the kind of real-world lessons I usually glean from training, but I don’t think any range time is wasted time if I’m putting in the best I’m capable of.