Situational awareness or having an acute awareness of your surroundings is invaluable to our survival. However, being aware doesn't eliminate all risks. Instead, it provides us an opportunity to recognize threats and dangers in our environment.  Early recognition provides more response options and increases the likelihood of avoiding or surviving the incident.

Recently I saw a video that I think addresses the importance of situational awareness and how it can open our eyes to pre-assault behavior.

This video documents an incident at a Mobile Alabama, gas station.

It's important to note that gas stations and parking lots are notorious for assaults, carjackings, and robberies. Locations like these are called transitional spaces. Transitional spaces provide a target-rich environment for criminals and an easy escape from the scene. Also, people are distracted and busy with other things besides paying attention to others around them.

The suspect, a black male adult, wearing a white t-shirt, black and white pants, and carrying a black backpack, walks through the parking lot. It looks like he is leaving, but he notices the victim pull her vehicle into the parking lot in between the gas pumps. It appears the suspect notices the car pulling in and decides to pause and see if this person is a suitable victim.

First, the victim didn't initially notice the suspect walking through the parking lot. We should always observe the area for people and other hazards, especially when we pull into a parking lot. Also, she positions the vehicle so that the gas pumps block her view of the suspect. As a result, she can't observe him, and he has changed course and focuses on her.

Even with her vehicle in this position, If she noticed him walking away when she pulled in, seeing him emerge from behind the pumps a few seconds later could have alerted her.

scanning the area as you approach a transitional space is important. Positioning so you can observe and paying attention to people who show interest in you doesn't hurt.

Next, she is in the vehicle for a few seconds after it comes to a stop. The suspect observes and waits, removing his backpack, indicating he is not going anywhere and should be a warning.

It is now that the suspect tips his hand and clearly shows us that he isn't just waiting to ask for some spare change, but he wants to assault her and take her car. The suspect recognizes his actions are suspicious, so he takes a few steps, looks away, then puts his hands on his hips. He is trying to act normal and like he isn't paying attention to the victim.

People asking for directions or change don't usually behave like this because they aren't trying to hide their actions. This isn't to say these behaviors always come before an assault. Sometimes the suspect appears mostly friendly. 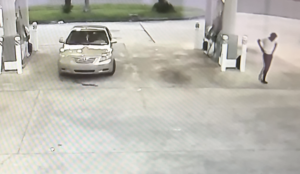 The “pay no attention to me, I don't even see you” pose is a dead giveaway this dude is plotting.

If the victim had awareness and noticed this behavior, what could she do differently?

The easiest thing would be to drive away. Alternatively, she may have kept the doors locked, car running, and observed the suspect. She could take a few seconds to determine if this is a situation to avoid.

She could have even repositioned her vehicle closer to the store entry or a different part of the lot. While she does this, she can observe the suspect's response.

Unfortunately, she doesn't observe any of these signs or fails to recognize them as red flags. Instead, she exits the vehicle and walks directly toward the store.

Acting on What Your Gut is Telling You:

The victim does well in that she isn't on her phone or preoccupied with something else. Her head and eyes are up, and she appears alert. 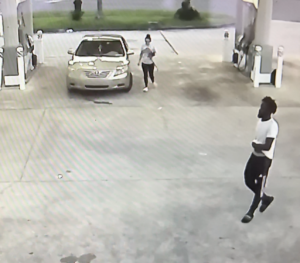 Situational awareness is important for threat recognition. But what if you don't pick up cues or fail to respond to them?

Here we can observe a common phenomenon that I see happen very often. Notice her head orientation as she walks to the door. She can clearly see the suspect in front of her.

It is obvious he is walking in a path to intercept her before she reaches the store's front entrance. She takes 15 steps, from the time she exits the vehicle until the physical assault. This is a long time to observe the clear pre-assault indicators this suspect is giving off.

And the thing is, I think she recognizes it but doesn't react. Again look at her head. It is forward, even at the very moment she gets assaulted. Victims often display this behavior because they don't want to appear judgemental by looking at someone behaving oddly.

So it appears as though she just looks away as if ignoring her gut feeling that something isn't right will work out in the end. 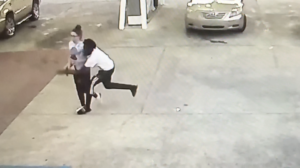 Don't be afraid to make eye contact, or verbally confront someone whose actions are making you uncomfortable. Ignoring it won't make it go away.

It's also important to note that she would have options if she had listened to her gut or recognized the suspect's actions as a potential danger before he grabbed her.

So, again, early recognition of potential threats affords us options in our response.

Again, unfortunately, she didn't respond to what I am speculating is now at least a gut-level feeling that this guy is a threat to her.

The suspect grabs her in a side bear hug, pinning her arms to her sides and picking her up off the ground. We don't need to deeply analyze the victim's unarmed defensive techniques; that is an entirely separate topic. However, we can see some things she did that clearly worked

First and foremost, she fought back. If someone assaults you and picks you up, compliance is rarely the best option. She shows excellent resolve to stop this guy from winning the fight.

It seems she also yells for help which is never a bad thing to consider. If others don't get involved physically, they may at least call the police. We shouldn't rely on others to save us, but asking for help or getting the police started in your direction is a good thing.

We see the victim wraps her legs around his, which tangles his legs up and takes away his balance and ability to carry her away quickly.

Eventually, she frees one of her arms and immediately strikes him in the face. This strike doesn't debilitate him or even stop his assault. Knocking him out would be great, but that is not the only path to survival. She delays and disrupts his plan with strikes and defensive positioning. 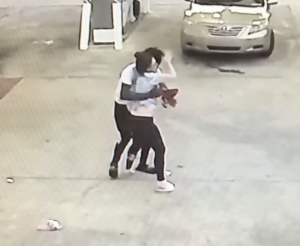 Unarmed self-defense doesn't have to be pretty. This strike to the suspect's face wasn't debilitating but was helpful in softening his hold on her.

The commotion draws a motorist's attention, who pulls their car near the two and possibly sounds the car's horn. If you're the good samaritan in this situation, understand that you may become the focus of the suspect, so make sure you are ready to respond.

The suspect throws the victim to the ground, and she drops her car keys. The keys may be what he wanted all along because as soon as he picks up the keys, he heads off to her car.

A Questionable Decision to Re-engage:

The victim gets up off the ground, runs up to the suspect, and confronts him about stealing her vehicle. In general, this is probably not a wise choice. Unless you have a child or vulnerable person in the car, it's safer not to face further injury or death over a car. But be that as it may, she confronts him. 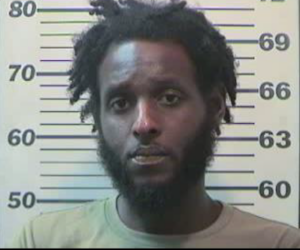 As anticipated, he squares up, drops the car keys from his hands, and accepts her challenge. She does well to back up and draw him closer to the entry of the store.

Eventually, she bolts inside the store, and he determines the car isn't worth all the trouble. He picks up his backpack and casually walks away.

Police identified the suspect and have him in custody. He is identified as a 28-year-old with prior assault arrests.

This incident is an excellent example of how a lack of initial situational awareness hinders the ability to recognize threats and thus reduces the response options.

We thank God that this young woman is safe, and we hope that through this video and similar incidents, more people will be safer as they pay more attention to their environment.

Feel free to share your opinion in the comments.

Consider checking out this Concealed Carry Podcast episode where Jacob and Riley discuss the elements of a Self-Defense Mindset.

How to Shoot Guns in Your Texas Backyard, and Not Get Arrested
Why People Don’t Buy A Shot Timer – Top Reasons Exposed 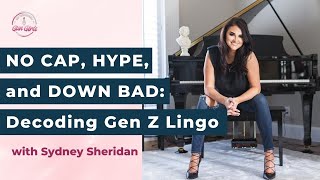 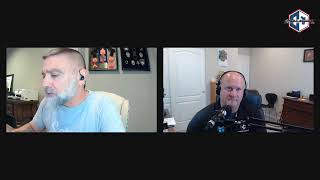