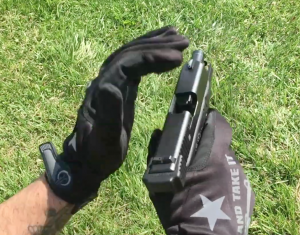 If your everyday carry gun (EDC) is a semi-auto, you need to understand the common malfunctions and how to fix them.

When you are defending your life, hearing a click instead of a bang could mean the difference between giving the police a statement about what happened or ending up in the morgue.

I know there are people out there that say they have fired (fill in the blank) number of rounds and never ever had a malfunction. It may be true or hyperbole, but the fact is no matter the manufacturer, no gun is impervious to a malfunction. This isn't to say all guns are created equal, far from it. But they are all machines with precise tolerances. And the number of factors that can affect any of these tolerances resulting in a malfunction are too numerous to rule them out completely.

Let's dive into how to identify some common stoppages with your semi-auto sidearm, how to reduce their likelihood, and get your gun back in running order quickly.

Indicator: You have manually chambered a round or fired at least one round and pulling the trigger produces a click (hammer drop), without a bang.

Remedy: The fix for a type 1 malfunction is simple, TAP, Rack, Bang. Tap (with force) the base of the magazine to ensure it is seated. Rack the slide deliberately and fully to the rear and let it go. Bang, assess the threat, sight in and if appropriate, attempt to fire. This is called an immediate action and should be performed as an immediate response to a click instead of a bang.

Indicator: You have fired at least one round and pulling the trigger produces no click (hammer drop) or bang. 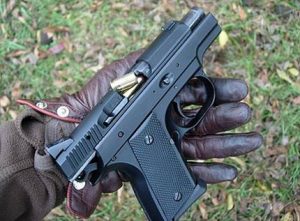 Remedy: The fix for a type 2 malfunction is exactly the same as a type 1 malfunction, Tap, Rack Bang. Type one and type two malfunctions account for the vast majority of semi-auto malfunctions. So it makes sense to make Tap, Rack, Bang your immediate response to a semi-auto handgun malfunction.

Indicator: You have fired at least one round and pulling the trigger produces no click (hammer drop) or bang. Performing immediate action (Tap, Rack, Bang) does not work and the slide won't go forward. 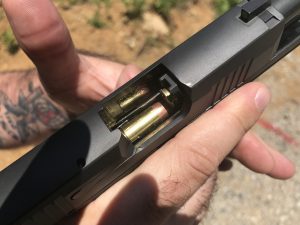 A Type 3 Malfunction I experienced at a training class.

Remedy: The fix for a type 3 malfunction is not as simple as type 1 and 2. First, you should perform immediate action, and then upon realizing it did not fix the issue, go into the process for clearing the type 3 malfunction.

However, some semi-autos do not have slide locks. And with certain guns, it is possible to remove the magazine without locking the slide open. Whether the slide is locked open or not, removal of the magazine will cause one of the rounds to drop out through the magazine well, and the slide will likely move forward.

Because type 3 malfunctions are sometimes caused by worn magazines, if you have another magazine you may want to ditch the one you just removed. This eliminates the possibility that you re-introduce the cause of the initial stoppage. If that is the only magazine you have, obviously retain it.

Deliberately rack the slide several times, ensuring you allow the slide to go completely forward. This is done so that the stuck casing is fully extracted and ejected from the gun.

Insert and seat the new magazine or the one you have retained.

Indicator: This has happened to EVERY shooter at some point. You attempt to fire your initial round and nothing happens.

Common Cause: Failure to initially seat the magazine or chamber a round.

Remedy: Conduct a chamber check and always know the condition of your gun.

You may fire thousands of rounds without even having to deal with any of these issues. However, it behooves you to understand how to fix your gun if it happens. Luckily, there are many ways to practice clearing these stoppages through dry-fire at home or live-fire on the range. Have you ever experienced any of these malfunctions? Let us know in the comments below.

The Lyman Targ-Dot Challenge Kicked my Butt
Episode 275: The Largest Corporate Donation to an Anti-Gun Cause