The gun industry is booming right now across the board. And, while it's kind of a pain in the you know what because nobody can find ammo right now, this is a good thing. Let's take a deeper look into this whole thing as we can offer a bit of a different perspective since we're also a company with firearms instructors across the entire country.

June saw the highest number of background checks ever recorded by the FBI, as the agency processed more than 3.9 million NICS checks in just those four weeks, alone.

This is the highest-ever number of background checks done in a single month. Also surprising, is that this is the second time the record has been broken this year. In March, 2020 a total of more than 3.7 million NICS background checks were completed by the FBI, which also dwarfed the old record. Here is a chart I pulled from the FBI's website: 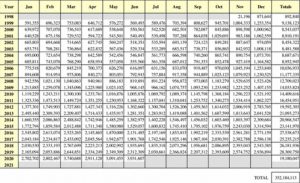 Another staggering number is the simple fact that we're set to blow the 2019 numbers out of the water. 2019 has the current highest number of NICS checks on record for a given year, sitting at more than 28 million background checks. So far in 2020 we're currently sitting at 19 million, and the year is only halfway done.

For perspective, the entire year of 2012 had just over 19 million background checks done for gun purchases which can be seen in the above chart, pulled from the FBI.

Of course, this doesn't translate into one check per firearm purchase, but this is what the FBI records and is our best number to go off of.

All of this stems from old gun owners continuing along in their purchases, as well as apparent new gun owners making their own gun buys.

This really isn't surprising for any of us who have been to a gun store in recent months with nearly empty shelves. With things like COVID-19 uncertainty, now topped with civil unrest, it's easy to see why a lot of the previously gun-less folks, are turning to firearm ownership more and more.

Boasting aside, and without giving you any specific numbers that can get me into trouble with the boss-man, our numbers stayed steady through April.

Then in May the numbers basically doubled.

Then in June they basically doubled AGAIN.

That is from in-person classes alone, as we also offer internet based instruction.

To put that another way, our June numbers had quadrupled from our April numbers. What this means is that not only are these people going out and buying guns and ammo, but they're also at least getting some type of training to use them properly.

Listen to me very carefully, this is Nancy and Chuck's worst nightmare. The anti-gunners won't know what to do now that there are so many more gun owners than there were just a few short months ago. People have woken up to the fact that we live in a very fragile world and that everything from the virus and sickness to civil unrest can and will happen at the drop of a hat.

By the way, if you're wondering if we offer training in your area, the really easy way to figure that out would be to find the menu option at the top that says “state resources and training.” Just hover over that, click on your state, and voila — instant access to your state's website that lists the training schedule, if that state has one.

Again, we don't have instructors in all 50 states, so you may not have any near you.

Where Can I Live Fire Train With My Gun?
Happy Birthday Sale 2020

2 Responses to June Was a Record Setting Month For Gun Sales, and Training