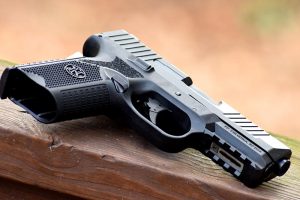 I've seen a lot during my tenure as a content producer for the gun industry. A good portion of what I've seen are things that have forced me to scratch my head asking, “how does that even happen?”

For example, I've seen (and even worked for) gun websites that were owned and ran by people who were deeply anti-gun.

I've also come across people who clearly don't know the first thing about firearms and the industry at large who write reviews of guns and products, also giving advice as if they did.

And now we're learning of fake “pro-gun” groups infiltrating the industry to try and sway opinions.

This particular group is called “Gun Owners for Safety” and was launched by none other than the Giffords Gun Control people.

You'll find, if you stick around long enough, that gun folks are some of the “safest” people around in terms of gun handling, but I have an inkling that's not what this is about. Instead, this is about gun control, and there's nothing commonsense about it.

Apparently one of the main goals for the group is to target a group of people in the gun industry that many of us call “Fudds.” Generally speaking, Fudds are gun owners who fit one or more categories. A lot of the time they are hunting-only people or don't know much about guns and are not interested to learn.

You often hear the following statement uttered by these folks: “I support the Second Amendment, but …”

Then there's this gem:

“I support gun ownership, but we need commonsense gun laws to keep us all safer …”

More about the word “but”:

After being an editor on this website for nearly four years, and another gun website for about two years, I can say that the word “but” usually negates everything said up until that point.

To help illustrate this, let's think back to when your high school sweetheart broke up with you. What did she say? Something like this, I'd bet: I'm having a lot of fun with you, but I think we should see other people.

Well, gee, you'd think that if you were really having fun that you'd want to keep having that fun instead of stopping it.

Unless, you know, you weren't having fun and are LYING.

Same thing with the “I support the 2A but” people. They don't really support the Second Amendment, because there is no way to support the 2A by picking and choosing what you think is okay. You are either pro gun or you're not.

As far as I'm concerned, you cannot be pro-gun if you're anti-Second Amendment.

You can't be both. There is no in between.

What does this fake pro-gun group believe?

If you care to know my opinion, it's that I'm all for gun safety. However, I think keeping your finger straight and off the trigger until you're ready to fire is NOT the “firearm safety” they're going after. How do I know? Because in the first bullet point they mention “policy change.”

Policy change is a fancy way of saying that they want to modify the 2A in some fashion. Then in the second bullet point, they want to “shift the culture” to make people more informed.

Here is another piece from their website that caught my eye:

For years, the gun lobby has spread the myth that we face a binary choice: guns everywhere, or no guns at all. That’s not true. Patriots of every stripe can agree that the Second Amendment goes hand-in-hand with commonsense measures like universal background checks. That’s what we’re about—bringing together unlikely allies to speak out for safety and responsibility.

All I have to say about this, is that we have background checks in a system that works when it is followed. Also, the binary choice is not guns everywhere or no guns at all. The binary choice is pro-gun or anti-gun. Anyone who is for more restrictions is not pro-gun.

If the result is guns everywhere then so be it, and I think we'd be better off for it. After all, an armed society is polite.

I watched a video the group published on YouTube that states what this group believes the 2A is for: Hunters, sport shooters, and collectors. I refuse to embed such drivel here, but if you must watch it just go search for it. I'm not even going to post a link to the Gifford's website where the “gun group” is. Instead, below, I'll put a link to The Federalist story I read that gave me insight into this nonsense.

I'm a firm believer that hunting, sporting, and collecting are nothing but a side dish of the Second Amendment. They're the side dish of a delicious, meaty main course.

Do you know how I know this? Because the founding fathers who penned the Second Amendment didn't write it down after a week long deer hunt … they wrote it after killing their enemies and winning their freedom (which is, maybe ironically, also our freedom).

They wrote it down so Americans for countless generations to come, would be able to enjoy the freedom our forefathers won. And then they finished that amendment off with four of the most important words ever written, outside of the Bible. Those words are “shall not be infringed.”

And just to beat any trolls to the punch, “well regulated” doesn't mean what you think it does. Today, a regulation means “rules” so it's easy to see why it is so misunderstood. Back when the 2A was written, the term “well regulated” meant “functioning well.”

And for the other trolls insisting that the “well regulated militia” is nothing more than each state's National Guard, that's not the case, either. I urge you to read 10 US Code 246 which states there is both an unorganized and an organized militia.

So at the end of the day, I urge you to join gun rights groups, but make sure you're doing your homework on who you're joining or giving your money to. Ultimately, gun rights will be won or lost at the state level, first. As so many states have seen their Second Amendment whittled down, it continues to get worse.

All of this just to say, make sure you get out and vote. Our very freedoms rely on it.

How to win the gun control argument.

Keep Your Finger Out of the Trigger Guard, Off Trigger Until Ready
Phlster Pro Series Review: Is This The Best Holster You Can Buy? (VIDEO)

27 Responses to Fake Pro-Gun Groups On The Rise