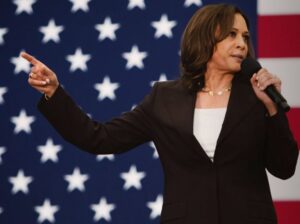 I hate getting into politics. I really do. And while I always get called out for it in the comments by at least a few of you, I have to do this. Guns and politics are inseparable.

It is not my goal to influence anyone, not directly anyway. My goal is simply to tell you where people stand on the topic of gun control, and what they plan to do once they get into office. Since Biden just announced who his vice president pick is, Kamala Harris, I feel compelled to tell you what her stance on gun control actually is.

Before we move on, let me point out how I came up with this information. As of today, if you were try to go to Harris' website, you'd land on Biden's website via what is called a 301 (or 302) redirect. Meaning that they have pointed her website to his.

In other words, whatever Biden's plan is to ban guns, is also now her plan to ban guns because she will be his VP if he's elected. We've already covered Joe Biden's gun control plan here and I don't plan to do it again.

Her stance on guns is also important, because if anything happens to Joe, she's next in line.

So in order to find out her stance on guns I had to do some digging. What I ended up doing was going to one of my favorite tools to see how websites used to look in the past, called the Way Back Machine, or archive.org.

When you type KamalaHarris.org into the Way Back Machine and follow the gun control rabbit hole down as far as it goes, you end up on this page last updated on January 9, 2020:

Her gun control plan is pretty much null and void right now as it currently is because if they win she will only be VP.

But, here's the thing. Biden isn't very healthy. I'm not attacking the guy and I don't wish ill on anyone. However, you can look at him and tell that he's not mentally aware and may even be suffering some form of dementia or something similar.

In fact I can see a decline in him from when they were still battling each other for the presidential nomination until now, and we never even see him now. When we do see him he makes zero sense when he talks.

What I'm saying is that it's probably just a matter of time once and if they're elected that she becomes the president.

In other words, we need to know where she stands on guns. And, after reading her page on gun control, it's not good. I wasn't expecting it to be. Here are a few of her bullet points:

If Congress fails to send comprehensive gun safety legislation to Harris’ desk within her first 100 days as president – including universal background checks, an assault weapons ban, and the repeal of the NRA’s corporate gun manufacturer and dealer immunity bill – she will take executive action to keep our kids and communities safe.

If Congress fails to pass universal background check legislation within her first 100 days, Harris will consider any person or business that sells five or more guns for profit in a calendar year a “dealer” of firearms, and require they conduct background checks on all gun sales.

In 2005, after extensive lobbying by the NRA, Congress passed the PLCAA, a dangerous law which prevents victims of gun violence from holding law-breaking gun manufacturers and dealers accountable.

Harris believes gun makers and dealers that break federal, state, or local laws – including negligence laws and unfair trade practices laws the PLCAA was designed to undercut – should be held accountable. That’s exactly what she will do as president.

Ban AR-15-style assault weapons from being imported into the United States.

This is just part of the gun safety agenda Harris will pursue as president. In addition to enacting universal background checks, renewing the assault weapons ban, and repealing the PLCAA, Harris will fight to make gun trafficking a federal crime, ban high capacity magazines, and prohibit those convicted of a federal hate crime from buying guns.

Again, these are the words pulled directly from Harris' former website, words that were last updated this calendar year.

She wants to ban AR-15 and other “assault style” weapons, so called “high capacity magazines” and do so much other damage to our industry it's not even funny.

I urge you to look over the entire page and come to your own conclusions about who you plan to vote for. But, once again, we find ourselves in a political predicament with the 2A.

Vote Wisely. Our future depends on it. Again.

The Hidden Dangers Of Shooting Your Firearm
Tips To Find Ammo, Guns, and Parts Right Now