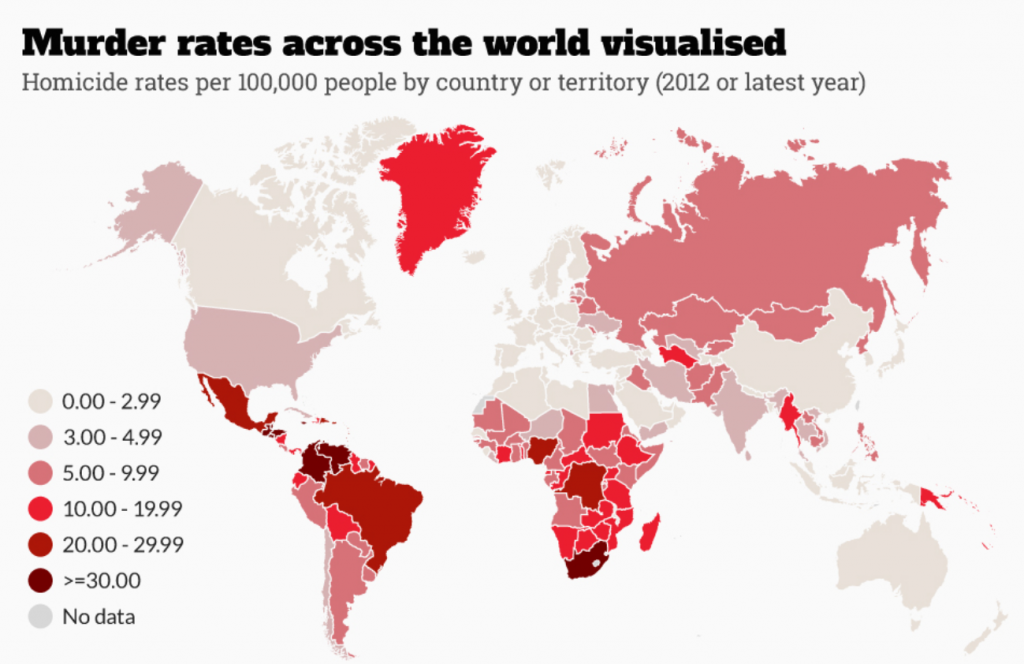 I'm about to show you why some of our opponent's arguments are totally wrong. The key to winning any argument with a gun grabber is to remain calm and use facts whenever possible–even when they won't hear them. Here, I present you with facts to combat one of their arguments when comparing us to other “developed countries.” We'll get there, but first some back story …

Apparently, there are an estimated 393 million guns in this country. According to a recently published WaPo article, that's enough for every man, woman, and child to own a gun and have 67 million left over. It's also estimated that there are 120.5 guns for every 100 people.

They go on to say that all of those 393 million guns are owned by only 50 million people (as if that were a small number), raising the average amount of guns owned by each gun-owning person to eight.

At first glance, an uneducated person may deduce that the amount of guns [alone] is directly responsible for the amount of murder we have in this country. After all, we are told the United States of America is ranked among the worst for “developed countries.” Therefore, they think, it must be the guns. Americans are gun nuts. Remember, the average number of guns owned by one person is 8.

That's a lot of guns.

Anything can be used as a weapon, even a newspaper:

The problem with their thinking, is that guns aren't the only objects used to kill people. As we've seen in countries with stricter gun control, sharp and blunt objects take over. The truth is, you can never ban all the weapons, because anything is a weapon. In the Marines, we are taught weapons of opportunity, where anything can be used to attack or defend.

I can roll up a magazine or newspaper and make a blunt object out of it. I can use that same object to effectively defend myself against a knife attack if it's all I have. I can use it to jab someone in the throat or kneecap incapacitating their ability to attack. I can use it to keep an attacker at more than an arm's length away, bloody their nose or knock the wind from their lungs with a simple tap.

Wow, I'm starting to sound a bit like a psycho. But, that's okay. I'd sound like a psycho any day to help your argument out a bit. Keep reading.

As we've seen on the world stage, where guns cannot be purchased, cars and trucks are used. Whenever vehicles are used, carnage is massive and cannot easily be stopped. A car weighs about 2 tons and is capable of moving through crowded streets at 60 MPH. Death and injury can be serious from what we've seen. And sadly, in this case, there isn't much we can do if we find ourselves in this situation. All we can do is get out of the way and remain aware of our surroundings at all times.

I have personally seen someone get struck in the head with a tire iron once on a Marine base where personal weapons were prohibited. And I, while not a criminal, always remain as prepared as possible. I always fly with several ink pens. And no, I'm not talking about those tactical pens that are aluminum. A regular ball point pen can do a good amount of damage to someone trying to hijack a plane.

And, for a similar reason, I keep an absolutely atrocious amount of keys on my key chain.

What am I trying to say? It's a fact that there will always be weapons that criminals will be able to use to hurt other people. Much like in the original Jurassic Park Movie where life found a way, people will also find a way to hurt innocent folks (or defend themselves against criminals) regardless of the present laws.

For this reason, and this reason alone, the crime numbers are up in the UK and several other European countries where guns are nearly impossible to acquire. People are still getting hurt without the proper means to defend themselves like we have here in the US. And, the strange thing is, this isn't even my main point.

The Reported Numbers Are Wrong:

If the anti-gun groups had their way, they'd have everyone believing that the United States is the Capital of this murderous world.

But the fact remains that on the global scale, the United States is ranked somewhere in the neighborhood of 80-100 depending on who you ask when murder rates are compared from every country around the globe. Let that sink in for a moment because that's not something you hear very often.

80 is nowhere near the numbers we're told by the gun-grabbing politicians and media, which, last I remember, we were in the top 5 according to their numbers. How did this get so skewed then?

They Cherry Pick The Countries They Compare Us To:

Apparently, though, a “developed country” is one with a certain amount of money.

I'm not sure what it is about countries where income isn't as high as the United States, or why the anti-gunners hate underdeveloped countries so much that they can only ever draw conclusions based on the amount of money a country has, but that is what they do.

If you were to consider how the United States and the countries to our south got their start, we have more in common with Central and South American countries than we do Germany, UK, France, Sweden, Japan and the rest of those we are constantly compared with. Let's take Mexico, for example. The United States and Mexico were both settled countries. Meaning that people from Europe came over and claimed it as their own.

While on the topic of Mexico, they were just ranked with the 12th (15th depending on who you ask) largest GDP (or, in other words, Mexico ain't exactly poor these days even though many of their people are struggling) (link at the bottom). So they should, at the very least, be considered for this “developed country” list that the anti-gunners love spewing.

But they don't list them as such, and it isn't really a surprise. After all, Mexico was just recently ranked with one of the highest murder rates in the world. Where the United States has a murder rate of under 5 per 100,000 people, Mexico's is hovering around 20 per 100,000.

In case you are really bad at math like I am, Mexico's murder rate is much higher than ours is here in the US, and that would show on the gun grabber's charts, and they can't possibly report the truth that there is a (gasp) “developed country” with more people getting killed than the United States of Guns. It totally goes against their agenda.

Brazil. Ahh, Brazil. 9th Largest Economy, which also ranks somewhere around 5th for most homicides. Perhaps even stranger, is the fact that we don't hear anything about Brazil and being compared to them, when their GDP is higher than some of the other countries who we're always compared to!

Check out this gem of a visual I found. Just look how light the United States is VS many of the other countries. See any other countries that are suspect?

You will find more infographics at Statista

Interesting, to say the least. It's almost as if they don't want to skew their numbers. Why else wouldn't they include Brazil, Mexico, Russia, Turkey, Latvia, Estonia, and others on their list? Why else would they still use outdated charts and numbers when more current ones are available?

I'll let you form your own conclusion and I'd like for you to tell us in the comments below. But, you can rest assured that the numbers we are told are way different than what's real. These are the facts of the matter, and open for use in argument. Make sure you share this with your anti-gun friends, so we can help them understand that what they are being told is wrong.

To help prove my points, here are several sources for any skepticals out there in the audience. And, while Mexico may not have a high per capita economy, they are doing better than many think.

GDP rankings current as of 2017, according to the CIA. Shows Mexico's GDP at 12:

WaPo's article with the numbers of guns in the country:

More thoughts on why you can't compare the way they do:

This one shows Mexico's GDP at 15:

Here is an example of anti-gun agenda only comparing us to other high-wealth countries:

This one shows the United States being ranked 81 in Murder:

Houston Mother and Children Team Up to Take Down Abusive Father
Is Frangible Ammo Good For Concealed Carry?

6 Responses to How To Win The Gun Control Debate With Facts While Remaining Calm, Cool, And Collected