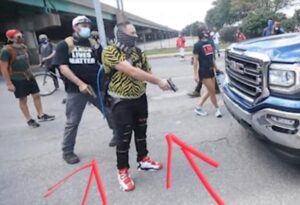 As I sit back and try to not consume any news because it's utterly depressing, I realize that it's my job to do just that and deliver at least some of it to you a couple of times per week. Over the weekend, Riley posted a screenshot in our company chat of an incident that took place on the Indiana streets that has me scratching my head.

The above picture was not a part of what he posted but is from the incident itself. I thought this particular scene was important from the video because it shows two guys with guns in their hands, stopping traffic under threat of force.

Most of the people talking about it don't seem to notice the second guy, only the first.

I had to do some digging to find out what happened, which brought me to the cesspool that is Twitter.

If this doesn't concern you in the least I'd say that you might be part of the problem.

This is not okay on many levels. First, as far as I can tell they're breaking the law. Which laws? After conducting a quick search for laws concerning idiots in the street in Indiana (where this allegedly occurred), these ones make sense to me:

IC 9-21-17-12
Sidewalk available; prohibition on walking along or upon roadway
Sec. 12. If a sidewalk is provided and the sidewalk's use is practicable, a pedestrian may not walk along and upon an adjacent roadway.
As added by P.L.2-1991, SEC.9.

IC 9-21-17-13
Sidewalk unavailable; use of shoulder
Sec. 13. If a sidewalk is not available, a pedestrian walking along and upon a highway shall walk only on a shoulder, as far as practicable from the edge of the roadway.
As added by P.L.2-1991, SEC.9.

Now I admit that I didn't do any further research and don't know to what extent these are enforceable.

As far as I could tell, however, they broke all of those codes and went out of their way to do so. Not only that, but they purposefully blocked the traffic while masked and armed and ran after the truck to prevent them from passing, again.

The person driving the truck clearly did not want to run anyone over, and even tried to avoid it.

The people blocking the streets are terrorists. Not only that, but there is a double standard if they don't find and punish these individuals but are so willing punish other, seemingly law-abiding people for defending themselves (thinking about the McClosky couple).

We live in a world where it's NOT okay to defend yourself from an angry mob of “peaceful protesters.” By the way, concerning the McClosky case, the peaceful protesters broke down a gate to gain entrance to private property (AKA they broke the law).

We also apparently live in a world where it's okay for a person in a different angry mob of “peaceful protesters” to pull a gun out on a guy driving his truck down the road probably just trying to go to work or the grocery store.

I'm not sure how we got here, but I can see what's next if we're not very careful. Let's look at a timeline:

First we heard of the folks who just want to be left alone having to defend themselves with their guns and getting into trouble for it. Second, we see the angry mob pulling their guns out to prevent those people from conducting their everyday lives.

What's the third thing to happen? What's next? People are already scared, hungry, broke, and tired of being restricted to their houses, so what is the next thing to come?

At some point, which is kind of already happening in some parts of the country, like we see here, people are going to be shooting at each other. At some point, a camel's legs give out on it under the weight of the straw and the whole thing comes crashing down.

And the reason why this happens, is because the police are being prevented from doing their jobs. They can't help, they can't put away criminals, and their hands are tied in many areas.

At some point when the people who just want to be left alone come to the realization that the police cannot effectively do their jobs this is likely to get really messy.

And in fact, I think we're leading up to a culmination of sorts. At some point people are going to be sick of this and will start taking matters into their own hands. When and if that ever happens, we'll be in a world of hurt.

Learn about how to draw your gun while sitting in a vehicle, here.

Do You Know The Gun Laws In Your State Or In Your Travels? You Should
Episode 437: Man Saves Lives by Intervening at a Cemetery