There are 59 incredible and unique National Parks in this blessed country. Since establishing Yellowstone in 1872, the US Congress has established National Parks in 28 US states (Alaska has 8 of them). My family likes to travel and explore. We visited two National Parks this past week. In light of that, I thought it would be an appropriate time to discuss how Gun Owners can safely and legally navigate to and through National Parks. 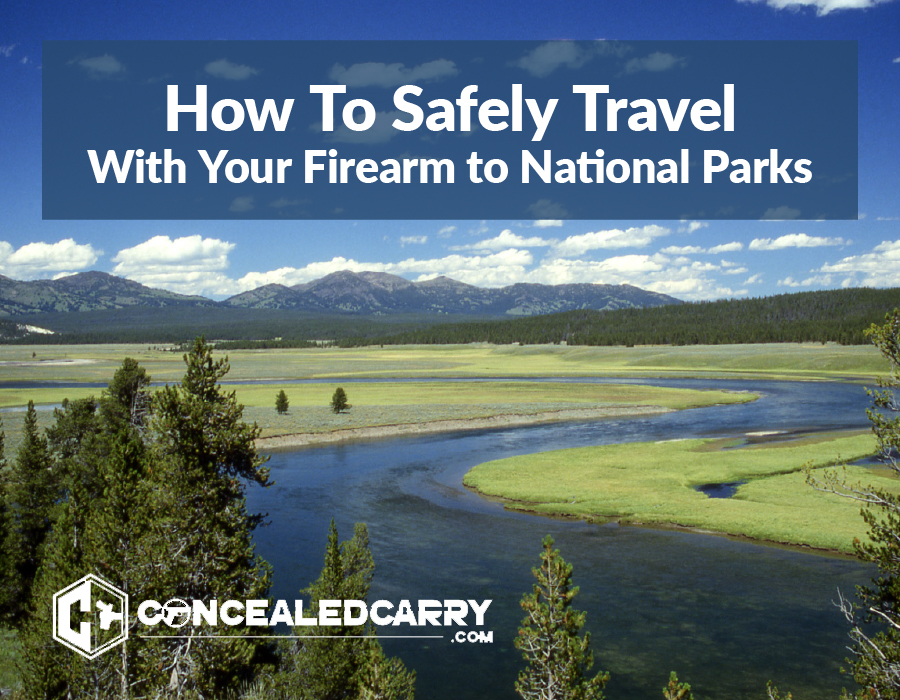 The National Park Service, an agency of the Department of the Interior of the US Government, operates all National Parks.  On February 22nd, 2010, Congress approved a new law allowing loaded firearms in national parks. It was a provision inside the Credit Card Accountability and Responsibility and Disclosure Act of 2009 approved by Congress and signed by President Barack Obama. HOWEVER, don't stop reading here, or you could get yourself into some serious trouble.

What Does the Law Actually Say?

From the new law, here is the relevant text:

What this then essentially does is apply state law to the possession of guns in National Parks. So, with that in mind, here are considerations you need to study and be familiar with:

The Individual States Can Prohibit Guns In Their National Parks 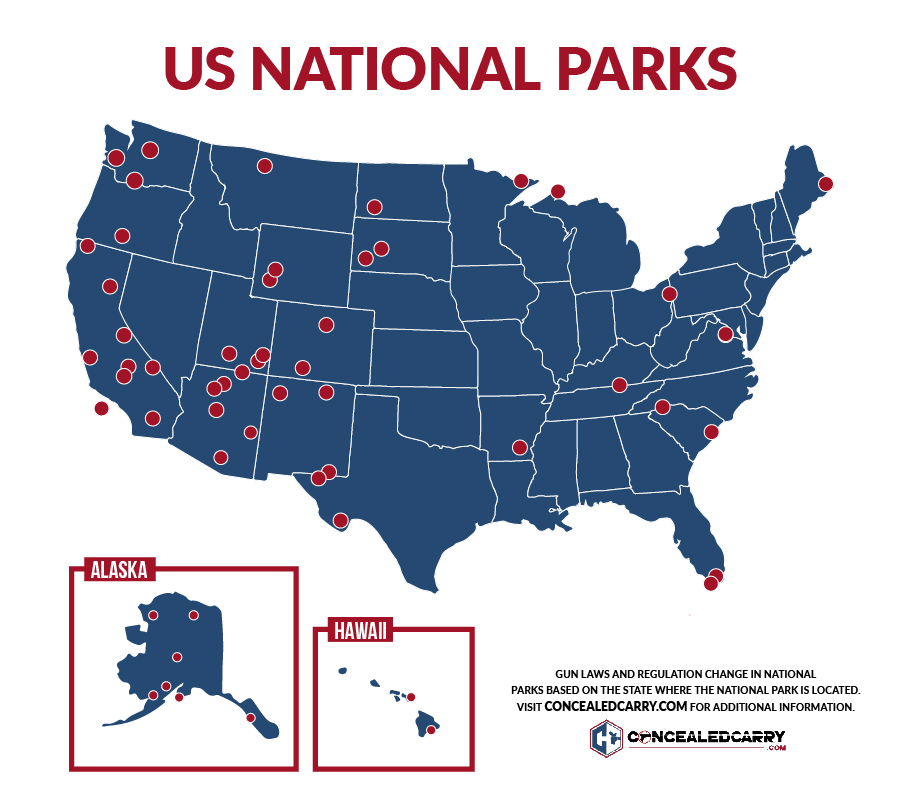 Since the new law essentially extends state firearm regulation into the National Parks located in that state, you need to research state laws before traveling into a National Park. Since you likely have to drive through that state to get to the park, and because you are a responsible gun owner, you know it is best to research gun laws in any state before you travel to or into that state. Add an extra step to check that state's regulations relative to having a firearm in a state or national park within that state. The Legal Boundaries Travel Book has a section on each state's page to answer that specific question.

In addition, our mobile app includes a legal summary for each of the 50 states providing current information about the restrictions in State and National Parks. You can find it on our site here: Gun Law Summaries by State.

If you are traveling to Yellowstone National Park, for example, you may be in the boundaries of Wyoming, Montana, and Idaho at one point or another. Be sure to be familiar with and comply with each state's laws in their respective state boundaries within the park.

The state may have regulations about what specific firearms may be allowed or legal, including limitations on magazine capacity.

The state may require that you have a valid and recognized permit to have your firearm concealed on your person and/or in the vehicle.

Riding or using public transportation within the park may be prohibited within any given state.

Don't shoot at that deer. I like the meat as much as the next guy, but the discharge of a firearm in a National Park is a big no-no, and unless you have a special permit or license, you will likely face prosecution for any hunting. 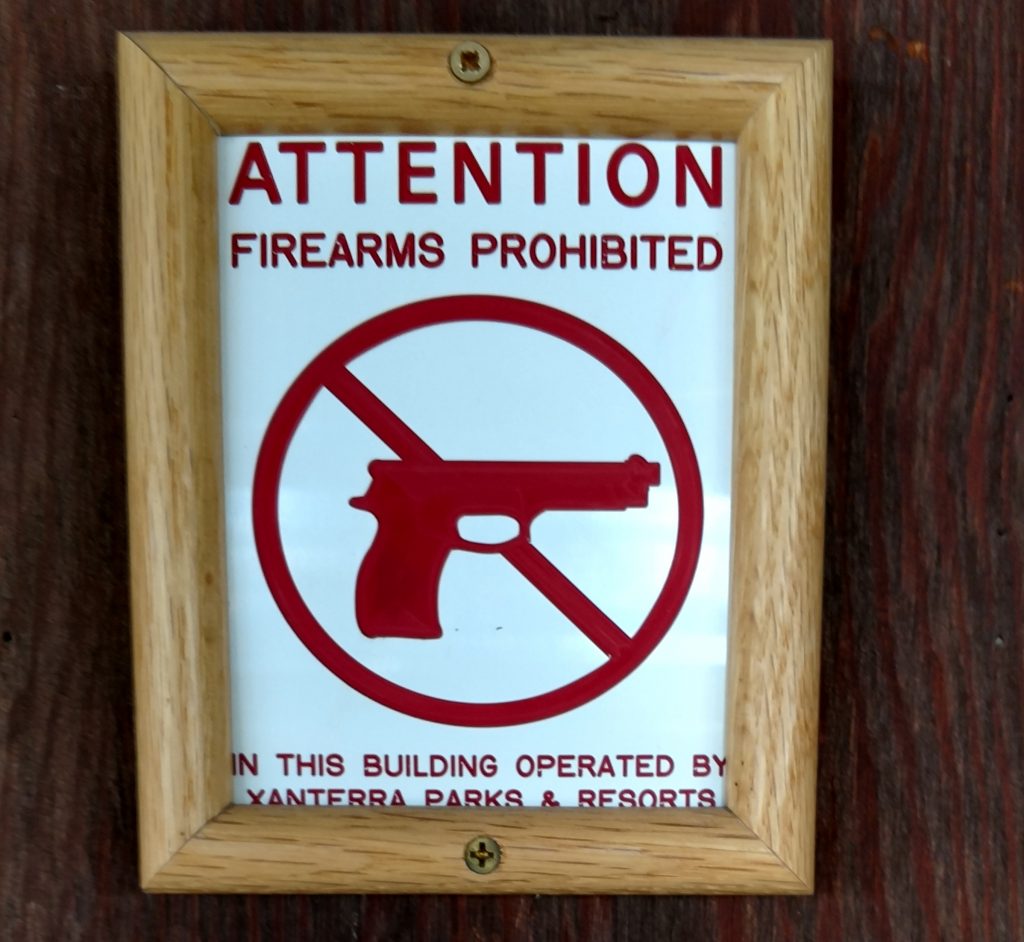 If you have researched all the above state-specific nuances and are moving forward with carrying your gun into the park, beware of the federally owned or operated buildings. Federal law continues to prohibit firearms inside of any federal building or any building at which federal employees operate full time despite any other local law. Within national parks, most of the buildings would qualify, and they only sometimes go to the effort of posting a sign. Also, an appellate court ruled in 2015 that gun owners do not have the right to keep/store firearms in their cars when on Federal property, so even getting caught with your gun in your car in the parking lot of a Federal Building could be an issue.

While it is lawful for gun owners to discharge firearms in National Forests, National Parks remains off-limits to any firearm's target practice or discharge.

And lastly, a reminder that while the law that went into effect in 2010 removed the firearm possession restriction, it did not appeal or remove the rules in place on other forms of weapons. Take the Glock but leave the BB gun home.

Suppose you want to travel the incredible natural beauty of the United States freely. In that case, you should consider having in your car with you a copy of “Legal Boundaries By State – The Travel Guide For American Gun Owners.” This intuitive but straightforward book will make it easy to research the various state-specific laws that affect your travel plans!

*this has been updated and republished from a 2018 post*