There is quite a bit of confusion surrounding gun registration in the United States. When someone purchases a gun, is it registered to the buyer? And is all the information is stored in a database somewhere? In other words, are guns registered when you buy them? 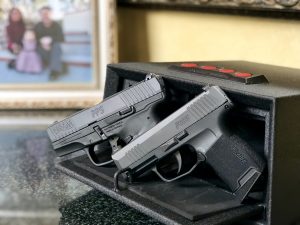 Generally speaking, there is no system, database, or registry for most American gun owners that tie us to any firearms we own. The Brady Act is the law that created the background check system. The law states that authorities must destroy the records of each background check within 24 hours.

FOPA is a United States federal law that revised many of the Gun Control Act of 1968 provisions.

As such, FOPA makes it illegal for the national government or any state in the country to keep any database or registry that ties firearms directly to their owner. The exact wording of the provision is as follows:

No such rule or regulation prescribed [by the Attorney General] after the date of the enactment of the Firearms Owners Protection Act may require that records required to be maintained under this chapter or any portion of the contents of such records, be recorded at or transferred to a facility owned, managed, or controlled by the United States or any State or any political subdivision thereof, nor that any system of registration of firearms, firearms owners, or firearms transactions or disposition be established. Nothing in this section expands or restricts the Secretary's authority to inquire into the disposition of any firearm in the course of a criminal investigation.

A few things here are worth noting.

States that Require Registration of All Firearms

States that Require Registration of Handguns

States that Require New Residents to Report Their Firearms

Despite FOPA, There Are Some Limited Government Gun Databases

In addition to the local authorities who may disregard the local law, we also know that the ATF keeps at least 5 databases of specific firearms and their owners to include:

It is also worth noting that notwithstanding FOPA, the National Firearms Act, enacted in 1934, does require that certain types of firearms be registered. The database records firearms not commonly owned or acquired by average gun owners like fully automatic firearms and short barrel rifles and shotguns. However, any firearm not explicitly mentioned in Title II of the NFA should not by Federal law be part of any registry tied to a gun owner.

Part of the anti-gun agenda is to enact so-called “universal background checks.” The law is a precursor to follow-up with national gun registration. One cannot exist without the other. Anyone selling one is also going to push for the other.