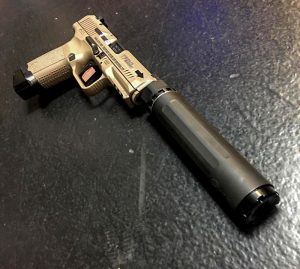 What are some pros and cons to using a suppressor? Well, we've never really gone too far into depth on the topic of suppressor ownership and I figured it'd be a good time since it seems like there will not be any pro-suppressor laws on the books at the federal level at any time in the near forever.

Do I currently own a firearm suppressor?

No, I do not own one. I have, however, shot my fair share of guns with suppressors mounted on them over the years and consider myself experienced-enough to talk with some authority on the subject. I am by no means an expert on the topic, and may say some things that I don't fully understand.

Feel free to correct me if I'm wrong.

For those of you who don't know what regulations I'm talking about, they fall under the NFA and require a different set of paperwork, an extended wait time that varies depending on the backlog, and extra fees on top of the cost of the suppressor itself.

But now we'll talk about something that I hadn't thought about until I watched a video that John Lovell did about why he doesn't like to use a suppressor for his home defense scenarios. From the video I watched, he wants the bad guy who breaks into his house to be concussed with the loudness and flash of the gun itself.

In other words, he wants the bad guy to know he has a gun. That makes sense to me to some degree, but I see the other side's argument as well, which is preserving the hearing of my wife and kids (but we'll get to that later).

Either way, there is more going on here in that the suppressor will “usually” add more mass to your gun, in both the weight and length departments. This means that it will effectively change the way you handle and move with your firearm.

And that last point somehow leads directly into the next one, which is that you don't just need to buy the suppressor and file for the tax stamp. You'll also need to buy other stuff like a barrel and probably specialized ammunition that is rated for being used with a suppressor, and make sure you have taller sights so you can actually hit your target.

All of that to say that you'll be spending a lot of money unless your gun is already set up for it.

The main benefit of using a firearm suppressor is hopefully obvious, and it is that it saves your hearing.

Most of us have been blessed with functioning ears to hear things of importance. Shooting guns and other loud noises are actually a detriment to your hearing. And, to make matters worse, you only get two ears. Once your hearing is gone it's gone.

It doesn't just save your hearing though, but also the hearing of those around you. If you have little kids or a spouse at home and you one day need to deploy your non-suppressed firearm to defend yourselves, you'll likely hurt their ears as well, to at least some degree (even though it will likely be lessened because they hopefully won't be in the vicinity of the incident.

In an environment when tactics are key, if you can manage the extra mass mentioned above, you'll likely retain a superior advantage in that your enemy will have a harder time telling where you are.

Of course, the sound is not completely muffled which is why I refuse to use the term “silencer” (or “can” for that matter). But the fact of the matter is that your opponent will have a harder time hearing AND seeing you. In addition to helping muffle the sound, the suppressor also acts as a decent flash suppressor.

But again, the main benefit is that it helps you retain your hearing by dropping the decibel level of a gunshot down to something more tolerable.

The use of a firearms suppressor is a good idea for some, but the price of admission is high. Just make sure you understand the pros and cons and have them weighed out before you make the purchase. And if you go for it, make sure you practice with it both at the range, and in dry fire if you plan to use it for your home defense use.

Episode 460: Turns and Stuff
The Hidden Dangers of Removing Your Gun in the Car

4 Responses to Pros and Cons to Suppressor Usage