Join Our Newsletter
Shop Our Store
MAIN MENUMAIN MENU
By Eve Flanigan on December 11, 2018 in Gear 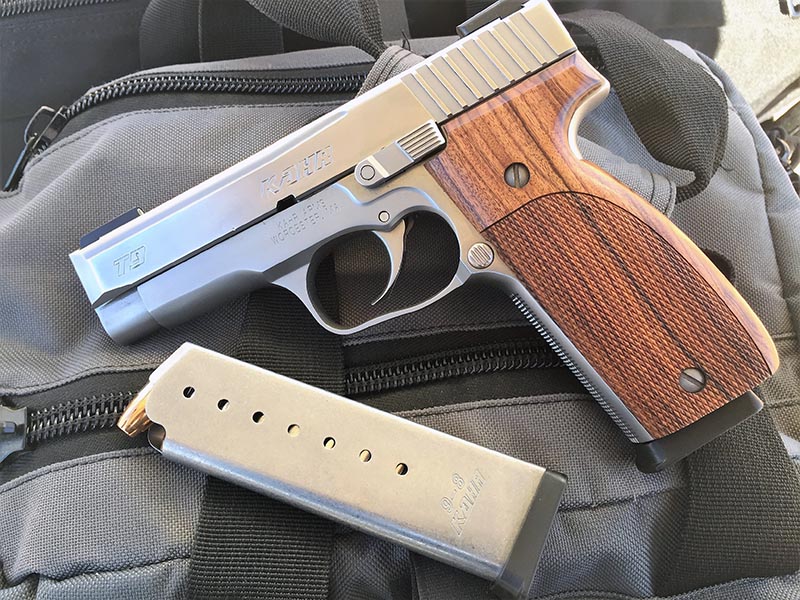 A wood grip by Hogue is part of the elegance of the T9 Elite.

The T9 Elite is a relatively new release from Massachusetts handgun maker Kahr Arms. As the name implies, it’s an upgraded version of their T series handgun, chambered in 9mm and .40 S&W. The 40-caliber firearms in the lineup are called T40; the 9mm chamberings are called T9. All are members of the company’s Premium Series of handguns.

This small, boutique chapter of the Kahr lineup should have great appeal to fans who value a pistol for looks, layered upon sturdy steel construction, as well as those who want a unique firing platform that’s more reliable than many others in both the common and more exclusive markets.

Since first impressions mean a lot, I’ll start with the outside and work inward. The moment I opened the hard-shell carry case with custom-cut foam inserts, and laid eyes upon the T9, the Miami Vice theme song started playing in my head. The T9 is its own design, but the outward resemblance to Sonny Crockett’s Bren 10 is there. The annoying case of 80s earworm only lasted until I took this sweet gun to the range and learned what it’s really about.

The outer metal surfaces of the T series are stainless steel; the Elite models have a polished slide finish and three-dot, windage-adjustable night sights by Novak. In daytime, the front sight has white ring visible around the tritium insert, making sight acquisition fast and intuitive. 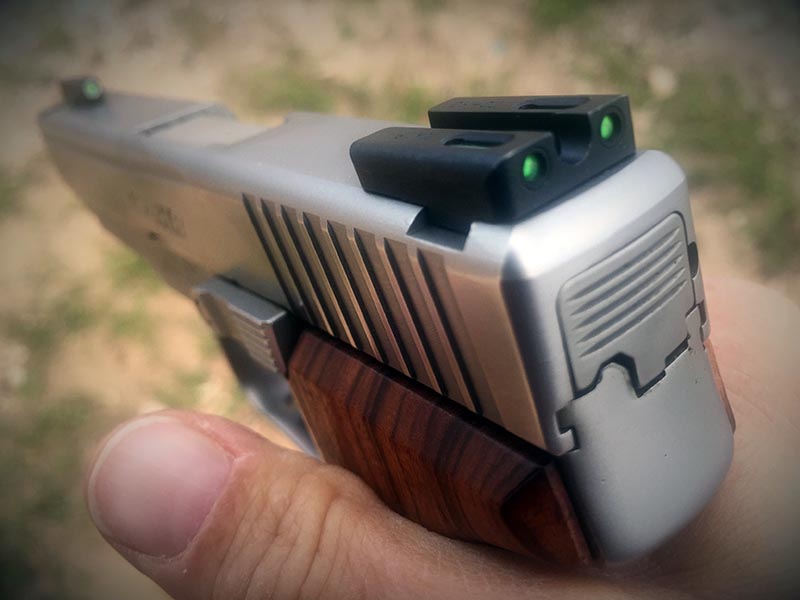 Other distinctive outward features include a wraparound, hardwood grip by Hogue, with lovely grain and fine checkering. The checkering continues onto the steel front strap, creating functional and artistic traction. A roomy trigger guard, reminiscent of the Sig Sauer P220, shrouds a trigger that’s quite long and forward in placement, the first indicator that this is a double action-only (DAO) handgun. Notably lacking from what one would expect from the trigger appearance, though, is an external hammer—because there’s no hammer at all.

Moving inward, the T9 Elite is built around a monolithic barrel/link with an offset feed ramp that allows the gun to have a recoil-dampening, low bore axis. There is no external safety, but there are two integral to the inner workings of the pistol:  a passive striker block and a cam block. Both of these serve to prevent forward movement of the striker until the trigger is pulled. 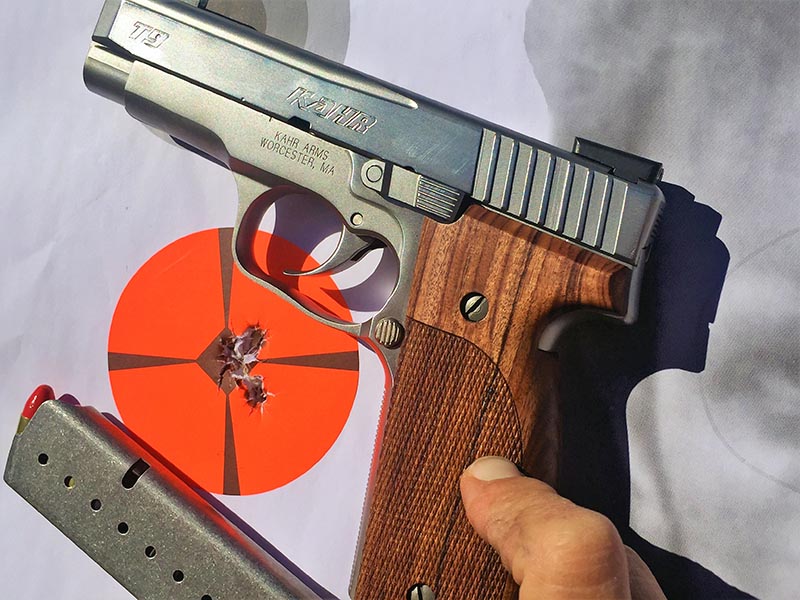 A bad shooting day was made brighter when the T9 Elite easily scored a one-hole, five-shot group with Federal Syntech ammo.

Pulling the trigger of the T9 also cocks the striker, but not in the way one would expect when hearing “striker-fired.” The pull feels more like that of a double-action revolver, a steady 4.8 pounds for the full distance of travel, with a consistent and clean break, and no perceptible “wall.” Resetting the trigger means releasing a bit more than half of the relatively long distance of travel.

Field stripping the T9 is more akin to a 1911 than a typical striker-fired gun. With hash marks on the slide and frame aligned, the link pin is pushed from right to left and removed, permitting removal of the slide. There is no bushing up front, but there is a non-captive, steel, recoil guide rod.

The T9 lives in compact gun territory, with a four-inch barrel and 8+1 capacity. The Elite version ships with three magazines. However, the bulky but manageable wood grip, 1.3 inches at the base, and substantial weight of 26 ounces sans magazine, make it handle as easily as any full-size pistol. While my small hands are no match for many DA/SA guns, that fat grip is sculpted so well, and the bore axis is set such that the T9 is a very comfortable firearm to shoot. 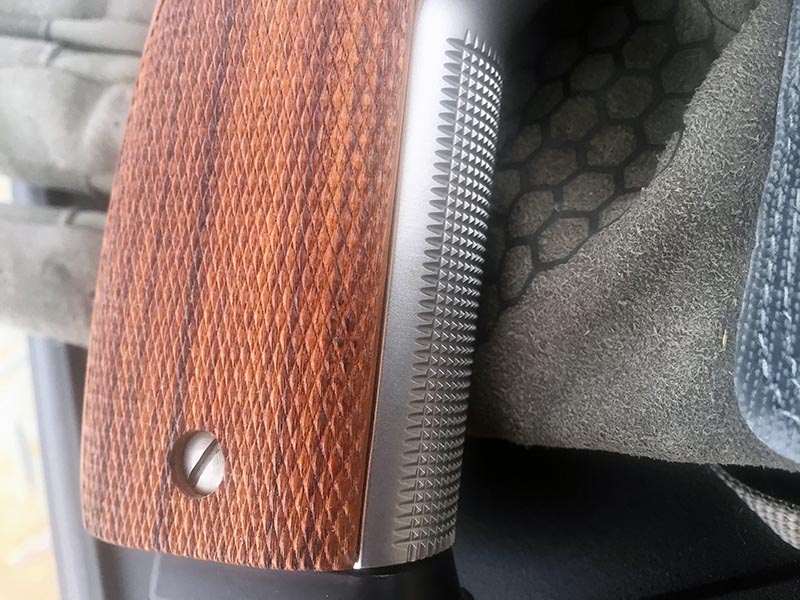 Exquisite checkering on the grip and front strap.

This is one accurate pistol, too. The tight tolerances make it a bit easier to be precise, as I discovered one day during testing when I was having an off day with my usual range gun. Picking up the T9 Elite for a break from frustration, I cranked off a favorite drill—five shots from five yards. The gun punched a nice, single hole despite the shooter and her coffee-for-breakfast jitters.

On a 25-yard test from a supported bench rest, the T9 Elite turned in several respectable five-shot groups, but two were especially impressive. Both Federal’s HST JHP 150 grain and Sig Sauer’s 365 V-Crown JHP 115 grain turned in groups of less than four inches. The T9 Elite is beyond capable in the accuracy department.

Based on this test which employed five different ammo brands/types including synthetic and metal-jacketed rounds as well as hollow points, I can only conclude that the T9 Elite is reliable. It fed every type of ammunition without a hiccup, whether being fired slowly or in my version of DAO rapid-fire, which admittedly isn’t nearly as fast as it could be with more practice. 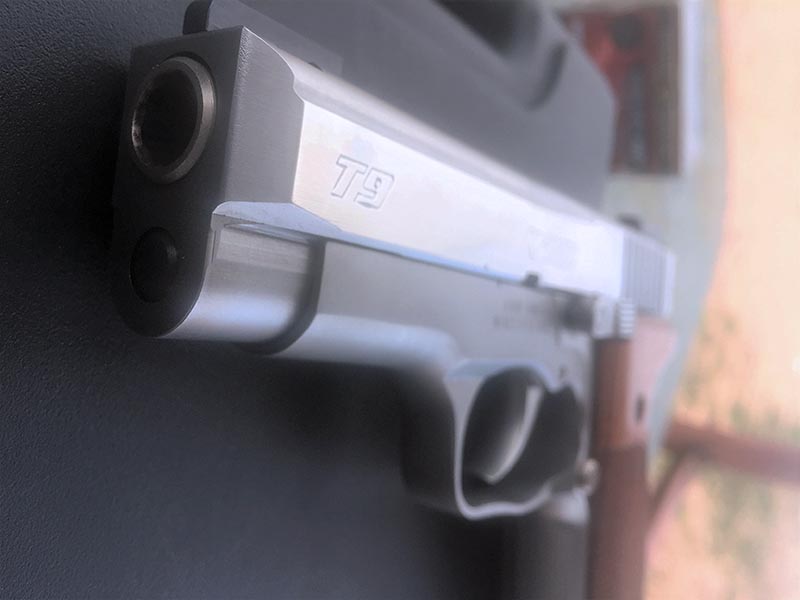 The absence of a bushing simplifies takedown compared to a 1911.

The only drawback I see to this gun, assuming you don’t mind carrying a heavy pistol concealed, is the placement of the mag release.  It’s small and tucked in front of the curve of the grip, shielded from any unintentional button-pushing. It does require conscious effort to release the mag, but as with any gun, this got progressively easier and faster for me as my hands “learned” where to go on this particular gun.

The folks at Kahr may not be fond of my saying this, but as an instructor who works with many new shooters as well as old shooters who struggle with that common error of jerking the trigger just before the break, I feel the TP9 has great potential to fix that problem. The trigger press is long and consistent enough, without being excessively heavy.

It rewards proper trigger finger use by having a pull just long enough for a learner to feel the nature of applying steady pressure to move the trigger. The absence of a “wall” or hurdle to press through right before the break also eliminates the cause of many an anticipatory trigger-jerk. Though I said at the beginning this is a gun that’ll appeal to upper-crust buyers with a certain taste, I believe it also has a place for those who have fought the trigger-mashing monster without success. 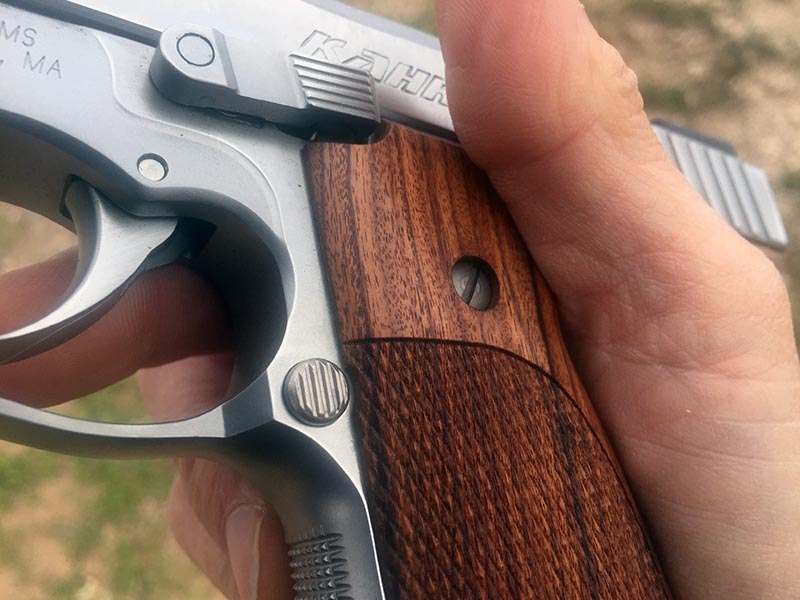 While the slide lock is easy to operate with the thumb, the mag release takes practice.

Kahr is, and should be, proud of having produced an eye-catching and accurate piece of functional art in the form of the T9 Elite. This gun isn’t tiny, and neither is the price. Current market prices are in the mid-$800s, with very few models available.

16 Responses to Kahr T9 Elite Review: Unique From The Inside Out