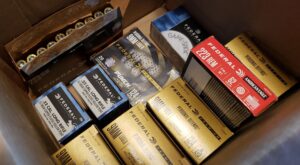 Here's a recent order I got from Federal.

Up until recently ammunition was relatively easy to find. Up until March 2020, ammo was abundantly found in stores across the nation and at online retailers. Then panic struck and ammunition is almost nearly impossible to find, and several of the retailers took advantage of the situation right away by gouging the prices before they even had reason to.

I won't name them, but they rhyme with deeper than Burt.

Anyway. Herein lies my industry secrets. Insider information about how I get ammo at the cheapest current prices possible. And it's really not that big of a secret if you've given any thought to how markets work.

Here's the secret: Cut out the middle man.

Since the middle men (and ladies) have no ammo to sell right now anyway, we're not doing them any harm by going right to the manufacturer.

There are a couple of websites out there that are manufacturer websites who sell their own ammunition.

Since this whole cough and mask thing started, for example, I've bought off Federal Premium's website on several different occasions (that picture is one of those orders).

Their prices are going up but not at the industry rate. When everyone else is thrilled to have found 9mm ammo at 60+ cents per round with astronomical shipping costs, I'm still able to buy Federal's ammo in the 30-40 cent per round range with free shipping.

While it's not that impressive when compared to February's prices, right now that's a banging deal.

And, making it even better, when you spend $149 or more you get free shipping (at the time of this writing). This means that the price you see is the price you pay without any additional heart attacks in the cart.

Another benefit that is great is that they don't limit you on how much you can buy. You can buy all of any specific product until they run out. At least, that's how it works to my knowledge. After all, I did buy that 500 round lot of 9mm without problem.

The way I suspect this works is that they release a product to be made, list the product for so many days or for a set number to be sold, and then after it's closed they make it to sell. I haven't spoken to anyone about this, but assume this is how they're doing it.

I could be wrong, though.

That way they're only making as much as they need and still have enough components, like powder and primers, for the other products.

The websites are as follows:

The thing with the above-listed websites, is that when you're looking for ammunition you've got to check on it regularly because as far as I can recall, they don't have a notify when in stock option.

They may be sold out of what you're looking for one day and have it in stock the next. They're making it as fast as they can.

The only downside to shopping for ammo like this is that it takes a while to get to you. I've only received one of my orders to date. I'd say that you should give it about a month. If you need your ammo quicker, like for a class or something, this won't be the best way.

Another one that my buddy has recently used due to my recommendation, is a company owned by Armscor. If you didn't know, Armscor makes ammunition and guns. Something that not a lot of people know is that Armscor has their own website called Advanced Tactical, where they sell parts and their line of ammunition.

I have not used them personally, and they don't advertise free shipping, though my buddy did say he got it shipped free likely because his order was so big.

You have to get creative if you want to keep buying ammo during this shortage. The best place I can find is direct from manufacturer to cut out the middle man. I've given your four different options to choose from in this article.

There are others, I'm sure. All you have to do is think about your favorite ammo manufacturer and see if they also sell their own ammo. The bigger ones might and it certainly cannot hurt to check.

And, the added benefit of cutting out the middle man and getting reduced prices sure can't hurt, either.