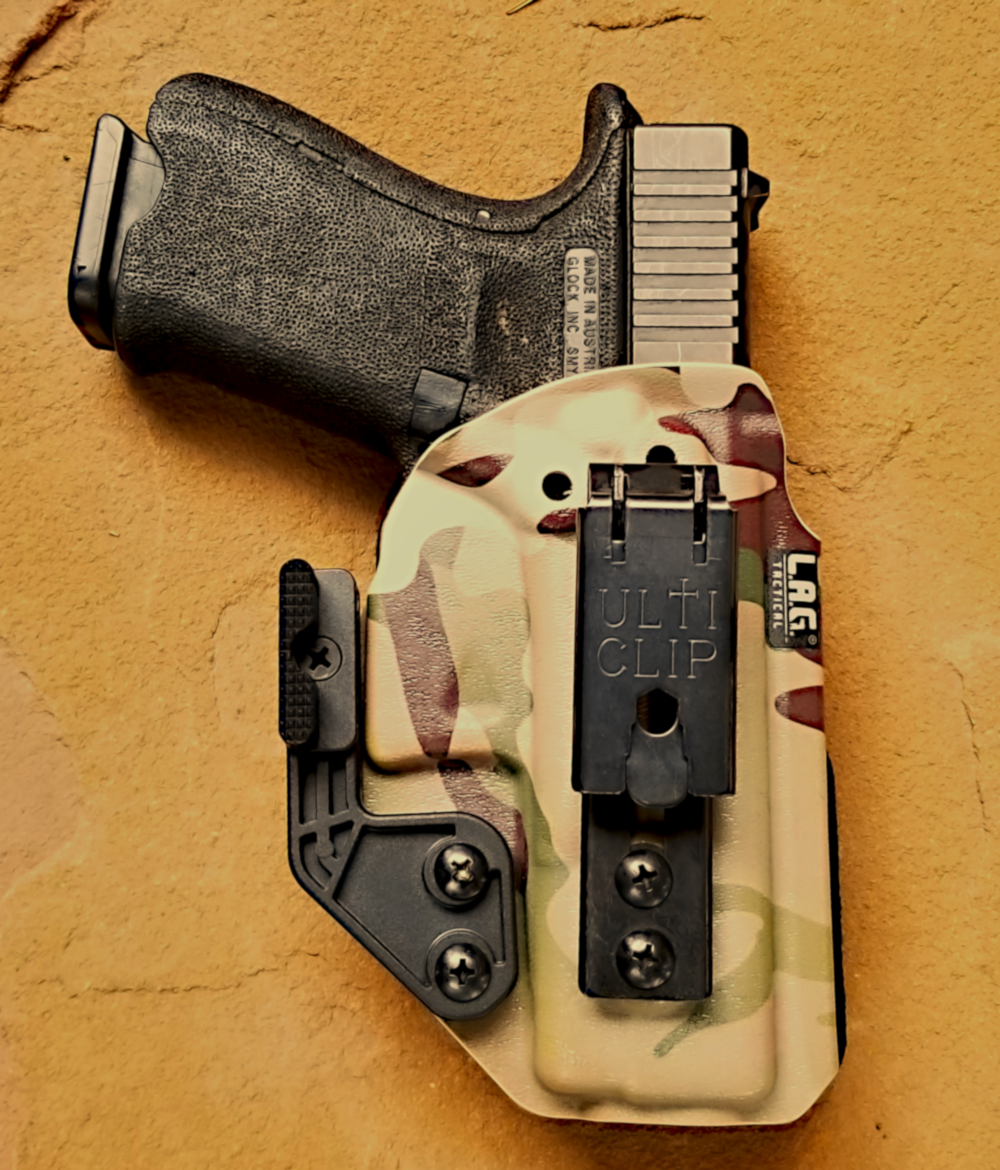 There are thousands of holster companies producing a steady stream of Kydex holsters with varying degrees of success. Companies ranging from small garage operations to large corporations flood the market with countless options for carry position, style, and function. Wading through this river of Kydex can seem a bit overwhelming for someone new to the concealed carry community.

Often, I see newer gun owners doing the research to purchase a quality CCW handgun, but then putting that same pistol into a random holster with little or no thought. It’s no big deal if this is where you’re at right now. I’ve been there too, and so has almost every other person I’ve talked to who carries a pistol for self-defense.

But, now that you have perhaps been carrying for a time, you are starting to notice some of the downfalls of that holster you purchased with so little care.

Maybe it’s uncomfortable to carry in and you find yourself dreading the thought of putting on your pistol before leaving the house. Sure, it was fun at first but now it’s become a bit of a hassle.

Maybe it’s even slipped out a time or two, due to a lack of retention, prompting a quick shot of panic. Or it could be too tight with no way to adjust the retention to your specific preferences.

Maybe it just looks like crap. The lines aren’t clean, the edges are rough and unfinished, and the hardware broke after a few weeks of carry.

Whatever the reason, it’s time for an upgrade.

L.A.G. Tactical is worthy of your attention. Operating out of Reno Nevada, L.A.G. Tactical produces some the best Kydex holsters I’ve come across. Their attention to detail is flawless, and try as I might, I couldn’t find one thing wrong.

Combining this attention to detail with fantastic customer service and a two-week lead time is what makes L.A.G. such a powerhouse in the market of Kydex holsters. I don’t know if everyone appreciates a good lead time like I do, but in order to achieve getting your custom holster shipped to you within two weeks of placing the order means they need to be running a very tight ship.

The L.A.G. website, which admits to this accusation, says,

“The phrase “good enough” has no place in our shop; our mission is perfection.”

And if you ever get the chance to put one of their holsters in your hand, you’ll see for yourself they mean it.

You: “I bet all that “quality” is expensive. But get to the point already. What makes their holsters so good?”

And yes, relatively speaking their holsters cost more than one you might find on eBay sold by someone out of Pakistan. But you get what you pay for and they are priced to compete with other high-quality holster producers, so you’re not likely to find a better deal, or a better made holster.

These are the reasons you should buy a quality holster from a company like L.A.G.:

These holsters feature a number of carefully planned holes for a broad variety of carry styles, positions, and hardware. This is important for someone who is a little strapped for cash and can only afford the basic model. This allows those of us common folk the option to add extras and upgrade the holster over time to fit our preferences and budget.

The retention for all the holsters I tested was perfect for me right out of the package. Tight enough to hold my pistol as I ran, but loose enough for a fast and efficient draw. Though the option is available to adjust the retention if desired.

How high or low on your belt the holster rides is adjustable, as is the cant of the MK II holster, allowing for that perfect, consistent placement which in turn helps facilitate a fast and efficient draw.

My MK ll came with an optional Ulticlip XL which adds an extra $15 to the order but is a good choice if you're looking for a belt attachment upgrade. The Ulticlip XL features the same style locking mechanism as the original, but also includes an additional design which allows the clip to function as a kind of simple multi tool.

It’s just a graduated wrench and a flat tip screwdriver, but dual-purpose items get a higher priority in my kit, so I have a hard time turning it down. 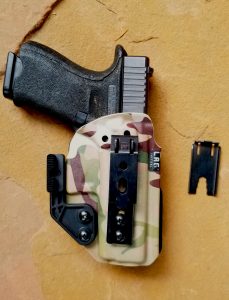 Top part of Ulticlip detaches to be used as a small graduated wrench and flat tip screw driver. 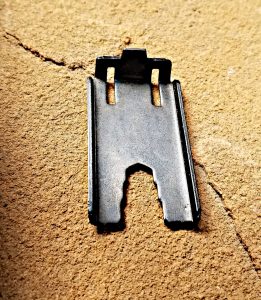 The Warrior V2 is thoughtfully shipped with an additional set of injection molded belt clips so the customer has the option of either inside or outside the waistband carry. If your holster comes with plastic belt clips, make sure they are injection molded and not made from Kydex.

While Kydex is great for holsters, it doesn’t make for the best clips because it tends to flex and eventually break at those flex points over time. L.A.G. and other top holster companies anticipate this need with the included clips.

Since Appendix is my favorite carry position, the MK ll is my go-to for CCW. The Warrior V2, however, should serve well come elk season so I plan on leaving it in the outside the waistband configuration. 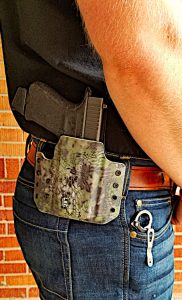 The Warrior V2 felt secure and my draw is liquid smooth, and quick. Beyond that it was just as comfortable as any other outside-the-waistband holster as you might expect.

I appreciated the extra effort L.A.G. goes to by including an inside-the-waistband clips at no extra cost. Wearing it on my hip, the holster felt perfectly secure and I was able to adjust the ride height to where I wanted it for a smooth draw, just like you might expect.

I was pleased with the quality of the Warrior V2's included IWB clips which stayed in place and had enough flex to get them over my belt as I wrestled the holster on and off.

Usually I only get a plain black holster when I have the choice. But this time I sprung for the Kryptek Altitude pattern and I was surprised by how much I liked it once I saw it in person. The camo pattern will also be nice come fall when I'm stomping around the Rocky Mountains and scaring off all the elk.

For the MK ll, I got the Multicam pattern which gives the look of it an extra something in my opinion.

But how easy it was to carry my Glock 19 is what really won me over with the MK II. Other “appendix carry enthusiasts” will understand how important a comfortable holster is for that position. A bad holster will chafe, and dig into your groin and can make CCW a bit of a chore.

I opted for the “rubber wedge” attachment which mounts to the back bottom left of the holster, right where you’re most likely to have the holster dig in. Additionally, the wedge helps to push the top of the holster tighter against your body, further increasing concealability. 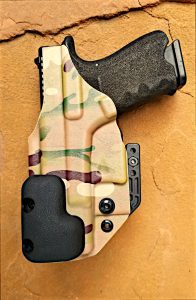 There is also a place where a holster claw can be attached. The claw helps to widen and even out the print of the holster and push the part of the gun which tends to print the most (the grip) closer to your body and increasing the concealability even further.

To be honest, this is the first time I’ve ever had the opportunity to carry concealed with these types of bells and whistles. I’ve always been a bit on the cheap side and just “made do” with the basic models. Nothing wrong with that, but I have to say that had I known how much of a difference it makes in comfort I would have sprung for it sooner. Not essential, but it sure is nice.

Meticulous attention to detail is clear and the crew at L.A.G. Tactical appear to have anticipated every potential problem or need: 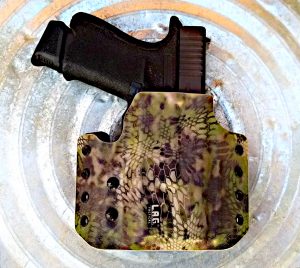 I realize that this is perhaps the least important item on this list. It matters little what your kit looks like if it gets the job done. However, coming from someone who's had more then his share of bad holsters, a holster you are proud to carry your pistol in is a nice feeling.

It's one of those, “if you look good, you feel good” kind of things. And if your holster doesn't look good, it means it hasn't been planned well, executed well, or both and could be signs of an inferior holster. If the company you purchase your holster from hasn't taken the time to ensure perfection in every item they make, there could be other less visible problems with it. 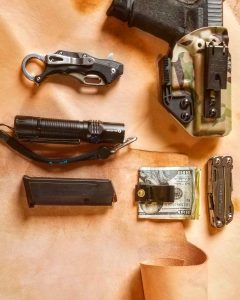 Among the community of concealed carriers, the topic of holsters is akin to talking about the weather for normal people. It will come up, and your choice of holster may say more about you then you realize, and leaves clues about whether you have only a casual interest in CCW or are a dedicated student of the gun.

The L.A.G. Tactical holsters fit my Glock, Like A Glove. What's your go-to holster? Leave a comment below.