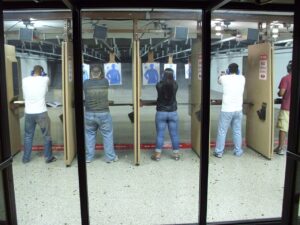 I believe that having like-minded friends will be getting more and more important as time goes on. I also believe that one of the best places to meet like minded folks is at your local gun range, though as I point out below there are a couple other ways.

And, I'm with you in that I don't like meeting new people. It is actually really hard for me and I've never really ever wanted a lot of friends. I don't really like people that much.

Furthermore, there is a reason why I'm a writer. I actually don't communicate all that great whenever my mouth gets involved — so I tend to put most of my words out on paper or screen. I'm better understood that way.

But I do believe that knowing people who share similar values, like the preservation of our rights and the 2A, is important. Why? Because at some point there is a very real chance that things are going to turn sideways in this country and it's better to have friends to rely on who know things.

If you catch my drift.

But actually introducing yourself to new people can be hard, so I've compiled a short list of ideas to help you make some new gun friends.

This is probably the easiest way to make some like-minded gun toting friends in your area. And, taking a class will also directly help your shooting skills improve, as well.

By taking a class you're forced out of your comfort zone when you have to participate in the class. This makes you talk and opens the door for you to talk to others. Of course, you can also make friends with the instructor(s) as well, which is something that I have personally done.

After moving to NC I had to take a new class to get my permit, and when I did I stayed in contact with the instructor of the class and still talk to him regularly and even go shooting on his property at least once per month.

If you're at the range, asking someone a question is a beneficial way of getting a conversation started. This can be a hard thing to do because it admits that you may have a weakness.

While I'm not a talker, this is a strategy that has been used against me with some effectiveness. Not too long ago, a guy asked me how he could stop shooting low and to the left, and I of course responded with some advice as someone who has overcome this dilemma to some degree.

Of course, you have to be careful with this method because not everyone is friendly, and there is also always the chance that you find some people there who are gun owners but don't share your thoughts about the Second Amendment. It happens.

This is kind of a no brainer to me, but some folks may not be a part of a local gun group just yet. Of course I'm thinking about Facebook here. In my specific area of North Carolina there are several local gun activist groups. Each of the counties we're surrounded by, as well as the county I live in, all have their own group.

This is beneficial because they are probably like-minded people and you know they're local.

Now I assume that not all areas have a gun group, but there certainly is no harm in you trying to start your own. It is quite easy to do, just make sure you follow Facebook's rules or you'll get the ban hammer.

Then, once you get more acquainted with these folks, you can start going to the range and practicing for whatever may be coming down the pipe.

Having some like-minded friends in your area can be a huge blessing. These are hopefully people you can rely on and train with in the coming weeks and month.

How have you made gun friends? Let us know in the comments below.