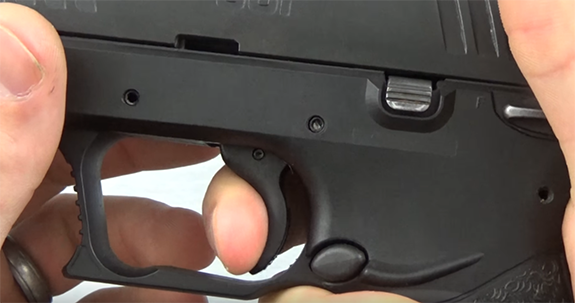 Pulling, squeezing, or pressing, it is all about the proper manipulation of the “bang button” when you are trying to put more shots on target in accurate fashion.

When I was teaching the NRA Pistol Course at my local range, my favorite part was instructing my students on the fundamentals. That is where the shooter’s body finally interacts with the gun. I explained to my students, “We are going to start from the ground up and work our way from our feet to the trigger finger. The closer we get to the trigger the more detailed the instruction is going to get.”

So starting with stance and moving through grip, breathing, and sight alignment, I always ended up talking exponentially longer each time I took the conversation a step closer to trigger control and discipline.

Other than the safety rules, it is the most important part of shooting a handgun. A student could do everything else right and be way off the mark simply because their trigger finger was not properly educated.

Back when I was taking my hunter’s safety course (pushing 40 years ago) the buzzword for pressing the trigger was “Squeeze.” We were told to slowly squeeze the trigger so that when the gun goes off it should be a surprise. My father’s pistol coach reiterated this instruction while he was teaching me to shoot a revolver. “Slow squeezing” was the way to shoot.

I believe this advice was to keep my young pointer finger from slapping the trigger when my youthful eye told me the sights were lined up. Later in life I called this phenomenon the “Get him before he can get away” syndrome.

When a new shooter is lining up the sights and everything falls into place, the tendency is to press the trigger while everything is perfect. The beginning shooter knows that the gun is going to move slightly no matter how hard they work to hold it still.

Consequently, they want to get that trigger pulled before their perfect sight alignment drifts way. It is a hard sell to convince a new shooter that they will shoot better if they press the trigger slowly. Even though it may not be a perfect ten ring shot, it will be a better shot than if they slap the trigger.

After years of shooting, I came to realize there is only one goal with all this “slow squeezing” and that was simply to keep the gun still while pressing the trigger. It may sound elementary (and it is) but I was so caught up in the method that I had to re-learn the purpose. Keep the gun still and you can slap that trigger all you want.

I recently had the privilege to instruct a group of young people who were training for a local air pistol competition. There was one little girl who was about eleven years old who had the most unorthodox shooting method. Her stance was inconsistent, her elbows were chicken winged out to the sides, and she was left-eye dominant–shooting right handed.

She was also consistently knocking the center out of the target, out-scoring every other kid in the room. The reason was that her dad had bought her a very expensive air pistol with a hair trigger. Her method was to line up the sights and press the trigger when it looked right. She had practiced this so often that she could be completely inconsistent with every other fundamental but she shot extremely well while doing it.  She had learned to hold the gun still enough to press the trigger and, with the hair trigger, that press was barely a twitch so the gun did not move.

So how do we keep that darn gun from moving while pressing the trigger?

The key word is “Press.” Think of the trigger as the button on the end of a ballpoint pen. You want to press the trigger. “Squeeze” is not the best of words, here. One thing I've seen quite a few students do, is as they're “squeezing” the trigger, the rest of their hand squeezes the grip even tighter.

I have also seen students try to get most of their finger into the trigger guard because they think they need a lot of finger to do all that squeezing.

You also want to use the center of the pad of your finger. If you look at your finger, the first finger bone has a pad halfway between the tip and the first crease. This is where you want to contact the trigger. Moving to the first crease will give you too much finger and when the trigger breaks, it will push the firearm ever so slightly away from the hand.

This can be demonstrated by going back to our ballpoint pen analogy. Hold a ballpoint pen in your shooting hand. Now press the button with your trigger finger. If you watch the other end of the pen, you will see the tip move ever so slightly toward or away from the palm of your hand as you move the button away from the sweet spot in the middle of the pad of your first finger bone.

Start out pressing slowly until the trigger breaks. As you get more comfortable, you can try speeding up. If your goal is to shoot bullseyes, I still think a slow trigger pull is the way to go. If you are shooting rapid fire or three gun competitions, you still want to keep that muzzle from wavering while you are pressing your trigger. I always say shooting faster does not eliminate fundamental steps it just makes you learn to do them faster.

Now practice! You have to work on keeping that pistol steady while pressing the trigger. Dry fire practice comes in very handy when you are trying to educate your finger. While dry firing, you can watch your front sight to detect any movement. This is much easier to see than while shooting live ammunition.

I have seen shooters improve dramatically just by making small changes to the way they manipulate the trigger. Work on this fundamental and you will see your shots move closer to that ever-elusive center ring.

Editor's Note: You know how we feel about dry firing here at concealedcarry.com. And if this is your first time with us, know that we believe strongly that dry firing is one of the best things you can do to up your skills, especially your trigger work. Check out these resources we've put together for dry fire practice.

Why Do We Dry Fire