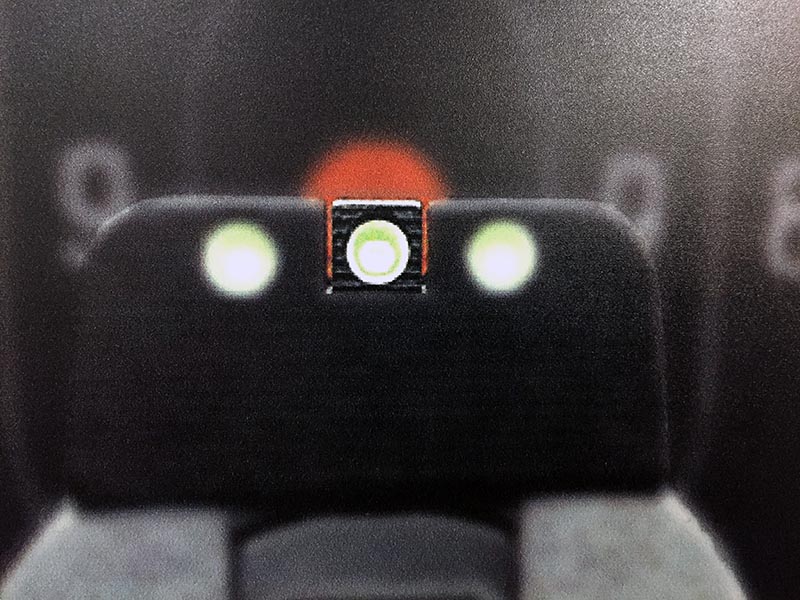 A while back, the owners of ConcealedCarry.com asked working shooters to contribute a favorite tip for an article and podcast. While I’m no match champion, I can hold my own on just about any pistol or carbine qualification required of people who carry guns on the job.

My humble contribution to this conversation, which included a couple folks whose work I admire very much, was the advantage of practicing front sight focus. This blog’s editor asked me to go deeper on this topic. So, here it goes.

Front sight focus: an extension of a fundamental of shooting

Sight picture—the correct arrangement of the rear and front sights, superimposed on the target, usually center mass for defensive purposes—is a fundamental of shooting. Simply aligning these three elements will almost certainly put your shots on target, but they won’t necessarily be precise unless you harness the power of front sight focus.

Our eyes are miraculous organs, but one limitation they have is the capacity to only have one distance at a time In sharp focus. When using most handguns, we have three choices of where to focus once sight picture is established—the rear sight, the front sight, or the target. It’s only natural to want to focus on the target, but there’s a time not to. It’s a matter of knowing when and how to shift that focus.

A word to the new shooters

For the brand-new shooters out there, the front sight is the little post at the end of your slide that’s farthest from your face as you grip and point the handgun. This may seem ridiculously basic, but I’ve had a couple students who thought “front” was the sight closest to their face.

Perfect sight alignment is impossible to maintain. We’re human, after all, and stuff moves around inside us—stuff like blood, air, and that burrito you had for lunch. Don’t let the resultant movement of your sights drive you mad. The technique described here all but eliminates the effects of this uncontrollable waver we all experience when looking through the sights.

The time to focus sharply on the target—whether it’s a soda can, the bullseye on paper, or the violent actor charging your way with a weapon—is before and while you’re drawing the handgun. Especially when you’re nervous about performance, it can be tempting to look at (and think about) lots of other things—your neighbor’s gun, clouds rolling by, your shoelaces. Take a moment to focus on the target. This combination of mental and visual focus should occur in the few seconds between the rangemaster’s “shooter ready. Stand by. FIRE!” or the BEEP of the shot timer, or whatever.

That couple seconds (two minimum, to be exact) is a scientific thing. A web search of “quiet eye” will explain how science has proven across many sports, ours included, that a minimum of two seconds of visual focus on exactly where you want the bullet to go makes it more likely it’ll go right there. That includes moving targets! 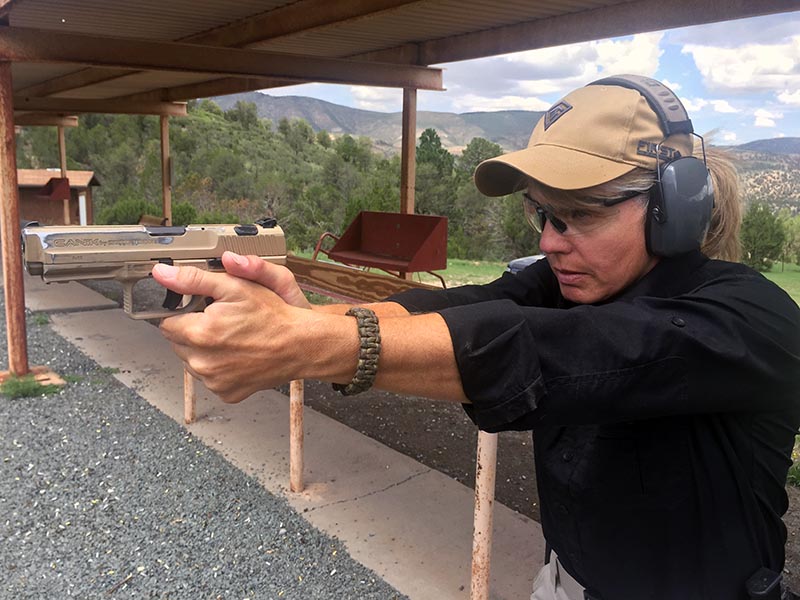 Focus on the target only until the sights are visible to you. Then, allow the front sight to be what you see clearly. Thanks to SSP Eyewear for some great eye protection.

Now that we’ve sated your innate desire to look at the target, the sights appear because your hands were drawing and aiming while your eyes and brain were target-focused. Aligning the rear sight is less important at typical defensive distances, however it is essential to practice that deliberately if you’re a new shooter, developing the habit of placing the gun correctly in space.

Your target talks to you

If your shot groups are mostly around the center of the target, but the holes are scattered in a pattern that resembles that of a snow flurry, you’re probably focusing on the target. Even if your target is showing other shooting errors, with the shot group being off to the left or right, high or low, a scattered group will get tighter with front sight focus, guaranteed! Fixing those other errors is nearly always about correcting one of the other fundamentals: trigger press, grip, or follow through.

Speaking of follow through, stay focused on the front sight as soon as possible after each shot, when firing more than one round. Raising your gaze over the gun to check the target after every shot will result in a group that sinks lower with each round fired.

Front sight focus is something you don’t even need your gun for to practice. You can do this little drill right now, wherever you are.

Point an index finger upward at arm’s length, so you can see your fingernail.  With the other hand, make the victory sign with your index and middle fingers. Place the “V” about four inches behind your extended index finger, so all three fingernails are visible.  Align them in a straight line.

Pick something as a “target” that’s five to seven yards or so away. Make it something smallish, like a doorknob. Keeping your aligned finger-sights in place, center them over the target. Now, play with focusing your eyes on the target, your “rear sight” V-fingers, and your front sight, AKA index finger. See how the rear sight and target blur when focusing on your index finger. This is front sight focus.

Take this game to the range. Spend some time drawing and shifting your focus from the target to the front sight, as you draw or present the gun, developing a feel for automatically aligning the rear and front sights. Dry fire, keeping the front sight where you want it. Then load, fire some groups, and compare them to your last shooting session.

Moving up the scale

Maintaining front sight focus for multiple, rapid shots will be the topic of one of my next articles, where we’ll look at a drill for shooting faster. Mastery of front sight focus allows you to unlock new levels of accuracy, and therefore confidence, in your shooting.

People who carry concealed know there’s a potential legal and moral consequence to every round that leaves the muzzle … developing this skill to make you more accurate isn’t only fun, it may keep you out of hot water someday!

Of course, none of this applies for those who use a red dot sight, which lends the luxury of being able to focus on just two things at once, including the target!

Dry fire was mentioned above. If this is a new term for you, or you just want to learn about what it is, check out this dry fire resource.

Tyrant Designs G43 Mag Release Review [VIDEO]
The Tactical Reload: What it is, Why We Use it, and How it’s Done

3 Responses to How To Focus On the Front Sight, and Shoot Better