The area inside the white dotted circle is where we want our trigger finger to make contact with the trigger.

At its core, shooting a gun is a mechanical act that requires the gun to be pointed at a target, and the trigger to be squeezed to the rear without moving the gun. If you think about it, shooting really is a simple process.

Over time, people far smarter than I have developed core ‘fundamentals' of shooting. When applied, these strategies help control human error and shoot more consistently and accurately. Instructors and shooters constantly argue over which of the fundamentals are most important.

All marksmanship fundamentals are important. After all, if they weren't important they wouldn't be called fundamentals. In my opinion, proper grip is the most important, but a good trigger squeeze is important if you want a super precise shot.

First and foremost, a solid grip allows you to control the recoil of the gun and keep the muzzle on the target. Without this, you can't effectively put rapid follow-up shots on target. The proper grip also sets up the alignment of your firearm with your body's natural kinesthetic alignment. Nothing short of luck will allow you to shoot well without a strong grip.

The size of the gun's grip affects where your finger falls on the trigger. And ideal trigger finger placement can help with trigger squeeze. This is why I have a hard time completely separating grip from trigger squeeze 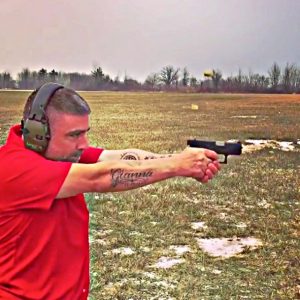 Combining a solid grip with proper trigger finger placement controls muzzle rise and overall movement of the muzzle. This is even more evident during rapid, follow-up shots.

Trigger Squeeze is the Achilles heel of Many Shooters

By definition, proper trigger squeeze is the act of pulling the trigger until the shot breaks, without moving the gun off target.

In theory, it should be simple to squeeze a trigger, without moving the gun. But like so many things in life, what is theoretically simple becomes more difficult in practice. Why? Think of how our hands primarily function. Almost exclusively, when we grip something, four of our fingers simultaneously grip together, while our thumb grips in the opposite direction. It is hard to think of a time where we grip something using only one finger and keep all the other parts of the hand motionless. But this is exactly what we are attempting to do when we squeeze the trigger. 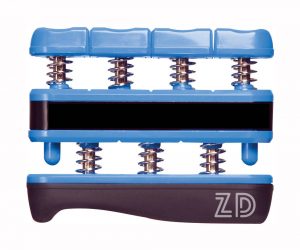 Using a device like this can help build forearm and hand muscle strength.

Strong hands, combined with a solid grip will lessen the likelihood that the shooter will tighten up their grip as they squeeze the trigger. All of this translates into a steady gun that does not move while the trigger is squeezed.

To build a solid trigger squeeze and grip, there is no replacement for actually squeezing the trigger. This could be done on the range, firing thousands and thousands of rounds. But through dry fire, you can perfect your trigger squeeze without spending a dime on ammo.

Think of this: perform 50 good dry fire trigger squeeze reps each day, for a month. At the end of that month, you would have gone through 1,500 trigger squeezes. Extrapolate this over several months and you can see how much practice you're missing out on.

Now for the Placement of Your Finger on the Trigger

The proper placement of your finger on the trigger, allows you to squeeze the trigger straight to the rear.

Let me preface this part by saying that trigger finger placement is not crucial to a good shot, but it definitely can make life easier in some situations. A locked in, powerhouse grip can overcome many poor fundamentals like a sloppy trigger finger.

So look at the physics of pulling the trigger and where your finger should be placed for an optimal squeeze. When you properly achieve your grip, the trigger should ideally come into contact about halfway between the tip of that index finger and the first joint. Let me explain why.

Everyone's hands are different sizes and their fingers different lengths. Take a look at your firearm. The distance between the backstrap and the trigger will determine where your finger naturally rests on the trigger. Many manufacturers provide adjustable backstraps to increase or reduce this distance. 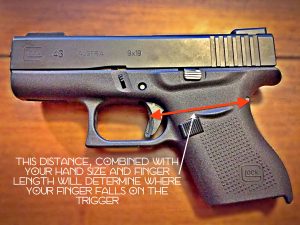 The distance between the backstrap and the trigger is very important. This is the measurement that will determine where your finger naturally falls on the trigger.

Work on keeping your trigger finger in constant contact with the trigger while your shooting. This eliminates a condition called ‘slapping' the trigger where your finger comes off the trigger then comes back into contact for the next shot. Slapping the trigger introduces movement and makes it difficult to shoot consistently.

If you keep your finger on the trigger, you will be in a position to squeeze again when the trigger ‘resets.' The reset of a trigger is where the action has cycled and the trigger can be pulled again.

I know there is a lot to think about when you are trying to perfect your fundamentals. But keep it simple, and start out at home with an unloaded firearm. Minimize the variables and try to remember that firing the firearm is just as simple as pointing the gun at something, and not moving it off that target while you squeeze the trigger. Again, while proper grip is the most important of all funadmentals, a good trigger squeeze can make your life a little easier.

How have you corrected some of your marksmanship fundamentals? Let us know, in the comments below.

One Response to How To Improve Your Trigger Squeeze