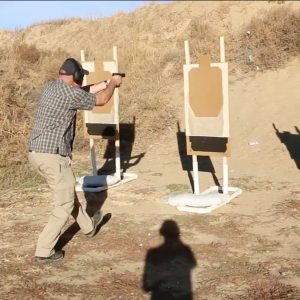 If you're here reading this blog or shopping our online store for any of the goodies we sell, chances are good that you'd consider yourself to be a good guy with a gun or at least that you are thinking about getting your concealed carry permit so that you could be.

But, I have a question for you: If you had to defend yourself right now, would you be successful in that defense of life? Would you come out on top? How do you know?

Okay, that was technically three questions, and I'm sorry I fibbed. But, they're all related. And, this is important stuff here.

To help ensure that you'd come out on top there are certain things you can and should be doing when you train that will get you to that point. I won't take up any more of your time, so let's get started.

Shooting Grip From the Draw:

I think that the grip is the foundation of successful shooting. Taking it a step further, I believe that most of the other shooting fundamentals can be overcome with a proper grip. Having a proper grip is so important it's the reason why it's first on this list. If you read nothing else in this short article than this section, at least you're getting the most important part.

But, here's the thing. A lot of folks, me included to some degree, will just work on their grip as it relates to the actual shooting of the gun.

So, they'll go to the range, put their gun in their hands, and land successful, center-mass shots multiple times.

But can you do it from a holster?

Odds are, you won't already have your gun in your hands when you're attacked. An attacker would, first of all, have to be an idiot to attack a person with a gun already in their hands. All this means is that you'll have to draw your weapon before you can effectively defend yourself with it.

I've seen a lot of people come out of their holster and get on target and they're not very good at it. And unless you have done it before, chances are you'll suck at it.

No offense. I know I sucked at it the first time, and I if I don't practice it on a regular basis it can be ugly.

The main problem, and I'm lumped into this as well, isn't that we can't pull the trigger properly, or that we can't line up the sights, it's that our grip is somehow wrong from the draw because we're not practicing this skill enough, or at all.

You just haven't built up that muscle memory yet when it comes to getting your hand in the right spot before you draw your gun.

The only way to overcome this is to practice it. But, hear me: Having a proper grip from the draw is essential. Their are just too many problems that can occur from having a bad grip:

You must practice acquiring a proper shooting, or what I like to call “combat” grip from the drawing of the weapon. In other words, put your hand on the gun in the right spot before the gun even comes out of the holster so you don't have to adjust or be forced to take a shot with a bad grip.

All the other stuff you're doing at the gun range will go right out the window without this solid platform. I'm not going to go into how to grip your gun here, because we've already gone deep into the topic in the following resources:

How to get a proper grip.

This is another one of those that sounds obvious, but really isn't because many people don't really understand what carrying a gun for self-defense means. And while many might argue that mindset isn't a “skill” to focus on, I'd disagree with them.

To me, a skill is something that is practiced before it is needed and there is the chance that if you needed to defend yourself with your gun, that someone will get hurt or die.

Those are the facts of it unless you don't actually pull the trigger.

Some folks have no problems with this mindset while others have come to grips with what carrying a gun for self-defense actually means.

What does it mean? To put it plainly, it means that you value your life or that of a loved one so much that you're willing to protect it at any cost–even if it means that someone else, the person trying to hurt you or your loved one, gets hurt or dies as a result.

The best way to come to grips with this if you're struggling with the idea that one day you may need to do this, is to realize that you didn't set out to hurt that person, they got hurt in the process of deciding to hurt you. You didn't want to hurt them and because of that, it's their fault they got hurt or died.

Ya know, unless a court of law decides differently. (Learn more about CCW Safe here, for that reason.)

You must know and make the decision before a defensive gun use (DGU) ever takes place what you'll do. Will you sufficiently protect yourself with center mass shots? Or, will you not?

I can't decide that for you, but you must master your thoughts before that time ever comes so you can act appropriately. Something that I've done personally, because I'd never WANT to kill someone, even if they're a bad guy with ill intent, is put myself in the shoes of others.

By visualizing myself in a DGU that has actually happened I know what I'd do either the same or differently, and each time I come to the conclusion that if I ever felt that I needed to defend myself or family from the threat of death, serious bodily injury, kidnapping, or rape, that I'd shoot center mass until the threat was stopped.

I've come to grips with this, though it isn't something I take lightly. Neither should you.

Master your mindset and start doing it now if you are not there yet because your ability to properly defend yourself until you've made that decision goes down.

Here's a podcast on mindset: 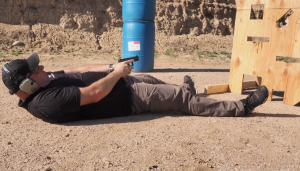 Finally, we have shooting oddly. In other words, don't just stand there at the range like a pole or peg with your feet shoulder width apart with a two handed grip … wait, didn't you just say that I had to work on my grip to get better at shooting?

Well, yes. Yes I did, but you must also master shooting imperfectly. Your strong hand grip, the hand you use to actually shoot the gun, should always be solid. That should not change. Ever. Well, if it has to change I guess there could be a time and place, but for the most part you should always aim to achieve a high, combat grip that allows you to manage recoil, etc.

The number of things you should be doing VS what you're actually probably doing (I know because I'd rather just go to the range and shoot statically too) is only helping you so much.

By practicing some of these things, even in dry fire, it will help you tremendously when it comes time to defend yourself, if that dreaded time ever comes.

Doing everything you can to prepare for a self-defense encounter will help you ensure you can stay alive at the end of the day. After all, that's the goal — to win.

Episode 431: I Had A Bullet In My Chest And I Pulled It Out Myself
Does Your Insurance Policy Cover You Expensive Firearms?