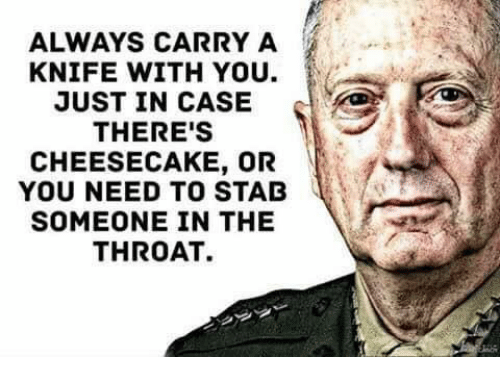 I love cheesecake. Seriously, it's one of my favorite things. If you ever saw me in person you'd know that was likely the truest statement I've ever made. So, I carry a knife on me, just in case. After all, one never knows if there will be cheesecake for dessert that needs to be cut.

The following article will discuss why you should consider carrying an EDC knife in addition to the rest of your rig. What it all boils down to for me is that you just never know. Because just as the SecDef has said, there could be cheesecake.

A knife is a tool:

A knife is a tool, just like a gun is, but they do different things.

I've needed to use my knife on numerous occasions. One such occasion had me stranded in the California desert at 29 Palms. I was in an HMMWVA2 (HumVee) that was broken down on the side of the road. We had run out of fuel in the tank, but thankfully had a few gallons in the back.

The only problem was that I had to bleed the fuel system in order to get the truck started again. The only tool I had on me at the time was a CRKT Grey Ghost knife that I ended up using to unscrew the bleeder screw to prime the system and get the truck back on the road, er, desert, again.

Had I not had the knife with me, I'd likely still be there.

Granted, the tip of the knife broke off so prying is generally not the best idea for a knife. But, it was all I had. The knife saved me countless hours waiting in the desert for someone to come help me.

I still have it after all these years.

Much in the same way, you can use a knife to do what it was meant to do. Cut things. Just today I used my knife to cut something open. Many times my wife will ask me for my knife. It's just like having a gun on you. It's better to have it and not need it, than to need it and not have it.

Here's another instance. A few years ago when I still lived in Pennsylvania we lost power for a long time. We had gotten used to power, and didn't have a manual can opener. Everything is electric these days and who needs one of those manual jobs?

Well, I did. Steak knives are too bendy to cut through a steel can properly without getting hurt and I wasn't about to use one of our other kitchen knives to cut through one. Thankfully, I have a collection of pocket knives and was able to cut the top off our cans and cook on our grill.

Yes there is a component of a knife that says you can use it to defend yourself. Where I sit right now as I type this, the building has a no gun policy. It does not have a no knife policy though. In an area where I'd rather not violate someone's right to say what they allow on their own private property, where signs carry the weight of the law behind them, I still want to defend myself and family.

A knife is better than nothing.

I suggest taking some sort of self-defense class that involves a knife because there are any numerous situations where your gun could fail and all you have are the things around you or on your body for self-defense. It's better to know how to use it properly than be caught trying to guess.

I, personally, learned how to use a knife in my Marine Corps combat training called MCMAP. We actually simulated fighting each other with knives and it was a wake up call to find out how devastating it could be.

Knife fighting isn't what you think it is. It is exhausting, and you shouldn't hold the knife in certain ways. If you don't know what you're doing, you'll only make matters worse. As with guns, training is key.

You just never know. What if there is a cheesecake that needs cutting? You'd be the hero of the party if you're the one with the knife to actually get the thing cut up for people to enjoy.

What's your reason for carrying a knife? Let us know in the comments below. Also, check out The Street Fighter Matrix to help you learn hand to hand combat along with some knife training to better prepare yourself.

2 Responses to Benefits of an EDC Knife