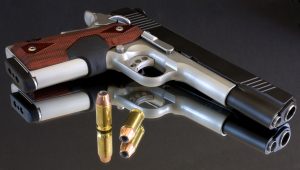 Sometimes I'm left scratching my head as I sit here and read the gun-related news stories each morning. So many incidents can be avoided with just a little consideration if people just stopped to think more. Any of us who are gun owners have the responsibility to make sure others don't get hurt with our firearms.

Sadly, a lot of people fall short, like in the two incidents below that happened just this week.

I read several stories this past week where toddler aged kids, so 4 years of age and under, have shot themselves with their parent's guns. The one that came across my desk today took place in Columbus, Ohio when a 24 year old man left his gun next to him on the couch as he played video games.

The young 23-month old child picked the gun up and shot himself in the stomach.

The little boy is still in critical condition in the hospital but is expected to make a full recovery. No other details are given about the father and if he has a concealed carry permit or not, but the 24 year old father has been charged with child endangerment.

And again, this is just the story that came across my desk today. I remember seeing a few others over the last several days with similar outcomes … the parent leaving the gun where the toddler can get to it. If you're not teaching your kids gun safety, and they likely won't get it at this age, you should NOT be leaving your gun on the couch when you're distracted playing a video game.

Negligence like this happens all the time and I'm really kind of getting sick of reporting on it.

We've written articles about this very topic in the past. Usually these articles come out for holidays like the New Year which is when the most people are trying to kill air molecules.

But this sort of thing does still happen at off times, as well, as we can see by a news story when a child playing in the schoolyard was shot in the jaw by a stray bullet.

Officials believe the bullet was fired at some distance away and that the child was not targeted.

This particular incident occurred in Leland, NC, and the child is six years old.

We've taken the stance that shooting into the air is stupid, if that is indeed what happened here as authorities think. After all, what goes up must eventually come back down. And while that projectile won't have the same velocity, it can travel for miles and still retains enough velocity to seriously hurt someone on the receiving end of it.

But, even if it wasn't a projectile that was shot into the air, even if it was target practice or a hunting projectile — any bullet can and will travel for miles until it either hits something capable of stopping it or gravity finally takes over.

You must always be careful when shooting.

The safety rule that says to know your target and what is around and beyond it applies to all shooting, everywhere, every day.

This means not leaving a gun on the couch while we're distracted by a video game, or shooting a gun into the air for an innocent person miles away to get hit by.

And it means so much more. Leave your thoughts on this in the comments below.

Dry Fire and Drawing Your Gun
Episode 457: Outsider Looking in at Competitive Shooting

24 Responses to Two Things NOT To Do With Your Guns