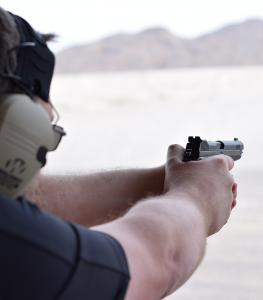 Continuing on with our short series about extending and teaching safe gun handling procedures to more people, we come to rule number two. Rule number two is simple, and it's simply this: Don't point your gun at something or someone you don't want to shoot.

Before we move on, this short series about gun handling safety is meant as a refresher for some because this stuff is extremely important, as well as to teach newer gun owners. And, if there is anything that the current climate has taught us, it's that there are a lot of new gun owners coming onto the scene.

You can find last week's article about treating your gun like it's loaded, here. You really should read that one first, and then come back here once you're done.

So moving on, what does this rule mean? For me it means to always keep your gun pointed in a safe direction. So, even when you're dry firing, you're not sighting in on a person, you're sighting in on a bare wall with a target on it or something similar.

When dry firing, you are intending to shoot (via dry fire, meaning the gun is empty or only has dummy rounds in it) the target on the wall, which is entirely within the rule's boundaries.

Many unintended shootings can be addressed if people just pointed their gun in a safe direction. What is a safe direction? Usually, the safe direction is toward something that wouldn't be hurt if shot. So, if you're at the gun range doing some live fire practice, shooting downrange (as well as pointing it downrange when not actively shooting) is the only answer.

It is NEVER a good idea to turn the gun around and point it at the people (either by accident or on purpose) to your left or right or really anywhere else. In fact, most gun ranges have rules that prohibit this action, even if you stopped shooting. Always keep the gun pointed downrange.

It goes further than that, though. Keeping your gun pointed in a safe direction needs to happen whenever you're handling your gun, loaded or not. It's a good practice to get into so it becomes habit.

Last week I mentioned a video that showed a man at a gun store who was handed a loaded firearm. The man proceeded to point his gun at his hand, and then shot himself with it.

In all honesty he should have cleared the weapon, first, but he did not giving us this incident as our example.

And if I were being completely honest with you, this is the main reason why I don't attend gun shows with the exception of SHOT Show or the NRAAM (which are ran by manufacturers, not gun stores or Joe Schmoe). Just about every time I have gone to a gun show in the past, gun owners would randomly point guns at me and other people, instead of in a safe direction.

And, every so often you hear of people unintentionally shooting a gun they thought was unloaded while at a gun show.

I'd rather not be on the receiving end of that so I just steer clear of gun shows entirely.

The only time you should point your gun at people is if you're fighting for your life and have the reason to, like self-defense.

Have you ever been muzzled at a gun show? Let us know in the comments below.

If you've never heard the term dry fire or want to learn about how it can improve your shooting skills, check this out next.

Defining: Shall Issue, May Issue, and Constitutional Carry
Episode 451: News And Reviews – The Death of Remington