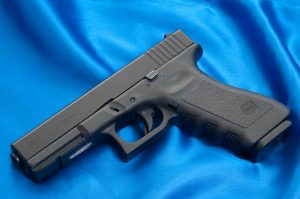 The firearms safety rules are of extreme importance. They were created to keep people out of trouble and to prevent what we call negligent discharges, or NDs, from taking place. An ND is basically the unintended discharge of a firearm. Also known as an “accident” to some, but I tend to veer away from that term as much as possible.

When you have a firearm in your possession you are tasked by default to be responsible with it. And if it “goes off” it's because you missed something or did something wrong. It was due to negligence on your part. (That does not mean that this is who you are forever though, because you learn from these things and grow.)

After studying this stuff for many years I've found that nearly all of the unintended discharges could have been prevented if only this one safety rule was followed. This safety rule is all encompassing, I think, with the rest of the safety rules.

I'm not downplaying any of the other rules because they should all be followed until they shouldn't be followed (like if you had to defend yourself … more on this in a future article, I promise).

Treating your weapon like it's loaded ensures you don't do anything stupid like point it at your cat and pull the trigger like I've seen some people do.

Even worse are the people who think their gun is unloaded when they're playing a joke on a friend and point it at their head. Or, the person who goes to clean their firearm forgetting to check its condition (loaded or unloaded) and pull the trigger.

These things happen way more often than they should, which ultimately brings us to the next point —

Always know the condition of your firearm

I like to take this rule a step further than was originally intended and add the fact that, in addition to treating your gun like it's loaded, you should also know IF it is loaded or not.

Whenever you have a gun in your possession, whether you're just picking it up or it is in your holster, you need to know if there is a round chambered and a magazine inserted (or a full cylinder).

And, this goes past your own firearm. If ever you are handed a firearm at a gun shop, by your best friend, or whatever, if the action isn't open (slide, cylinder, bolt, etc.,) check it. It takes two seconds to check and see if the gun is loaded or not.

I saw a video on YouTube once of a police officer or security guard at a gun shop who hopefully learned an important lesson. The employee hands the guy a gun, who then points it at his hand and pulls the trigger. He didn't know the condition of that gun because he didn't check and he fired a round off while the muzzle of the gun was pointed at his hand.

While some of the fault certainly goes to the gun store for handing customers loaded guns, the customer was also negligent when he didn't check.

You always check. And, you always must know the condition of your own gun. At all times. Forever.

At a class I attended a couple years ago we were waiting for the rest of the students to fill magazines and the instructor told us to go to the line and dry fire. One of the students didn't realize he had a round in the chamber and popped a round off. Thankfully nobody was in front of the firing line but that could have been ugly.

The instructor then went into a tirade about knowing the condition of your firearm. Had the student properly cleared his weapon first, he would have known that he was not ready for dry firing.

To combat this, we conduct a press check to find out (That link goes into press checking in more detail, but essentially, just pulling back the slide far enough to see the round in the chamber, while also making sure the gun goes back into battery in case you need to use it for defense).

At the end of the day, having a negligent discharge does not define you. This is something you can move past if you learn from it. The bottom line, you should not only treat every gun like it is loaded, but also know the condition of each gun you handle.

Because really, nobody should ever want an ND on their conscience.

Things are just safer that way.

For further reading, check out our study on 300 Negligent Discharges.