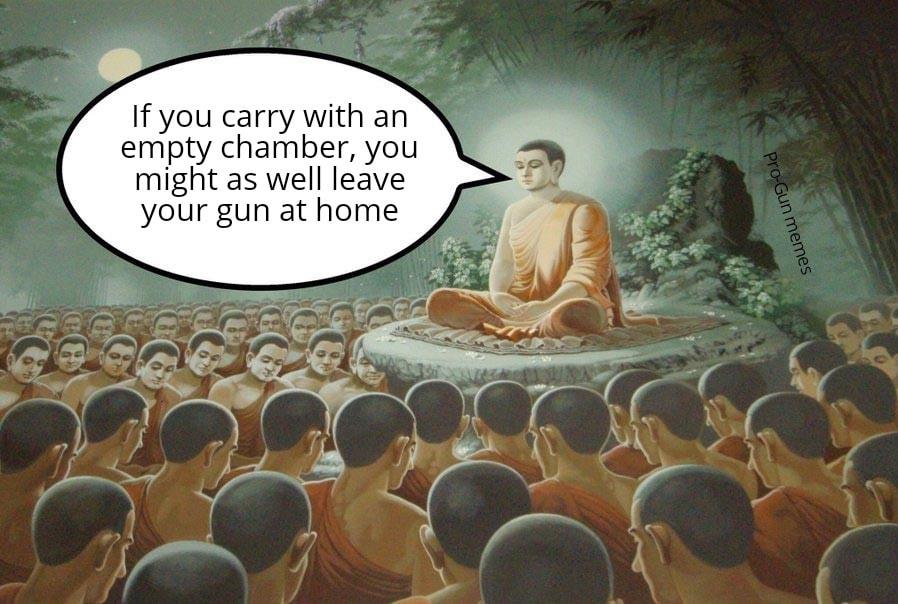 Here is the meme I saw today that compelled me to write this article. Credit: Facebook Pro-Gun Memes Page

I've seen a meme with this quote twice in the last week so it is time for me to express myself on what I think is a dangerous and ridiculous line of thinking we often use in this industry.

Before anyone calls me out or sends me hate mail you should know I carry with a round in the chamber and I strongly feel it is best to do so.

There are a lot of reasons why and speed isn't the only one even though it is often the only one cited in the argument. Carrying without a round in the chamber not only slows down your draw somewhat but it also reduces your ammo capacity by one round and complicates your draw should you ever need to do so one-handed.

RESOURCE: Carrying With A Round In The Chamber – To Do or Not To Do

RESOURCE: Podcast Episode 18: The Chamber or Not To Chamber

But Is it Better or Equally Good To Just Leave It Home?

No, it isn't. Having a firearm on you without a round in the chamber is still a significantly better place to be in a potential self-defense incident than not having the firearm on you at all. Any argument to the contrary seems crazy to me.

Yes, carrying without a round in the chamber means that one must rack it as part of the draw stroke but how much slower is that really? A well-trained shooter who practices that element into their draw can get it done in under 1 and 1/2 seconds total.

The delay added by racking the slide is probably 1/2 second. That might vary for others depending on the level of training and the carry position etc., but I have to ask the question: Does slowing down the draw by .5 to 1.5 seconds now mean that the gun owner shouldn't even bother carrying the gun? That extra second or two somehow means they might as well not have the gun at all?

Not all situations require a lightning-fast draw stoke. For example, in most mass killer events the majority of the victims have more than 1-2 seconds to react. They may have as much as 30 to 60 seconds to draw and present to the threat.

Let me take this line of thinking to an extreme. Let us suppose that in 99% of self-defense incidents the speed at which you can draw is so significant a determining factor of the outcome that the extra 1-2 seconds it takes to rack the slide means losing the gunfight.

This is, of course, crazy and not true but let us just suppose it was true. Then don't you think it would be better to have the gun than to leave it home in case one finds oneself in the 1% of situations where it isn't a determining factor?

RESOURCE: How to Train If You Don't Carry With A Round In The Chamber

How We Should Deal With This Issue

Telling gun carriers in our community that they shouldn't have the gun at all or might as well leave it at home is shameful. It divides us in a way that is unnecessary and it guilts people into feeling bad about their own journey or level of comfort.

I have to ask, do you really want someone who has gone through the time and expense to carry around a firearm for personal protection to leave it home instead of carrying it just because they don't have a round in the chamber?

If they are in the restaurant where your family happens to be eating when crap hits the fan will you say to yourself “I sure wish they had left that gun home instead of trying to save my family's life because they didn't even have a round in the chamber.”

We should applaud concealed carriers who have taken any steps forward in their own personal defense and then focus on encouraging them to progress and educate them on the pros and cons of each decision. We should avoid shaming them or telling them that anything less than the perfect carry loadout is worthless.

Let me know your thoughts in the comments below. Have you ever told someone they might as well leave the gun home? Has someone told you the same?

*UPDATE May 2022: Since publishing this article we've received over 50 comments below. I'm shocked how many of the comments are arguments for or against carrying with a round in the chamber. To those commenters I have to wonder… did you read the article at all? The point of this article is that regardless of how you feel about the issue it is shameful to suggest that people would be better off without the firearm than to have it with them in a manner that you feel is less good than how you feel it should be carried. Please as you comment below, and I encourage you to do so, please do so with respect for each other and orient your comment on the topic which is the issue with shaming other people for their choices when we don't agree with them.

Posted in Safety, Training and tagged edc, round in chamber