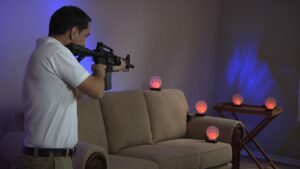 If you haven't practiced with your firearm, except for on the range, you are missing out on a tremendous amount of training and definitely are not as proficient as you could be. How can you train with a firearm when not on the range? Of course I am talking about dry fire.

All this training is completely free. You don't have to drive anywhere and all that is required is that you practice the basic safety rules and ensure you are practicing with an unloaded firearm and empty magazines. This training is invaluable and will, without a doubt make you a better, more proficient gun handler.

I use the term ‘gun handler' instead of ‘shooter' because as self-defense shooters, we have to be able to do more than merely shoot well on a static range. If you are dry firing, kudos to you and you can attest to how it has made you a better shooter and gun handler. But let's face it, sometimes dry fire can get a little boring, and we all like to spice up our training and try something new.

So I want to tell you about some cool training gear from a company by the name of Laser Ammo. I got my hands on their ‘Advanced Training Laser Pistol' (ATLP) and ‘Interactive Multi Target Training System' (i-MTTS).

The gear is great and not only can spice up your training, but also help prevent training bad habits.

The ATLP is available in a couple different models. The one I tested is the ‘Pro' model which is their top of the line. The ATLP is a replica of the full size Smith and Wesson M&P platform, so anyone with this very popular gun will immediately recognize it. The firearm is bright orange and completely inert.

The slide does not slide back and fourth and there is no way to actually chamber a cartridge. The ATLP does have a weighted magazine (weighing close to that of a full magazine) that can be inserted and released just like the real 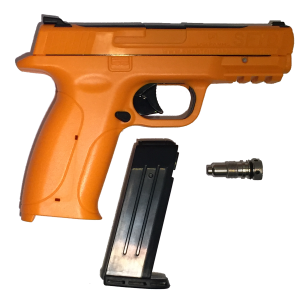 firearm. This tool is also is equipped with either an infrared (IR) laser or a visible red laser, that can be adjusted for elevation and windage.

What I really like about the Pro model is that in addition to everything else, it comes with an audible trigger guard warning beep if the gun detects a finger has been left in the trigger guard or resting on the trigger. This I find is a great tool for teaching new shooters who may be resting their finger on the trigger, or anyone who just never really broke this habit.

Additionally, this can be a great training tool for training your draw, and keeping you honest about letting your finger get to the trigger when you are still coming out of the holster and before your firearm is actually pointed toward the threat.

The ATLP makes a noise when the trigger is pulled to simulate a shot and the laser engages for as long as the trigger is depressed. I find the ATLP is a great training tool for practicing point shooting and quick target acquisition.

I say this because with the laser you can actually see what would be your point of impact when you pull the trigger. As someone who loves to dry fire, I enjoyed having the added visual reference provided from the laser.

Now I know if you don't carry a S&W M&P handgun (or the other version which looks like a G17), it may feel a little different in your hand than your everyday carry firearm. I also realize that if you carry a single action firearm that requires you to train to sweep off a safety or something similar, it is not going to replicate your exact draw or feel like your exact firearm.

Even with these differences, you can still train the fundamentals and build the muscle memory that allows you to present a firearm and point shoot it. I personally do not carry a S&W M&P, and know that the work I did with this ATLP is very effective and gives great feedback.

Additionally, the weighted magazine is great because you can practice magazine changes, which we all should be doing.

The other product I tested, called the Interactive Multi Target Training System was very enjoyable and can add a lot to your dry fire training routine. First, the i-MTTS can be used with the

ATLP or any of the other Sure Strike laser or IR cartridges sold by Laser Ammo.

The sure strike lasers come for pistol and rifle calibers so you can use the i-MTTS with almost any firearm or rifle, not just the ATLP. The way I tested the i-MTTS was in conjunction with the ATLP.

I found the i-MTTS to be super easy to set up. The units are not complicated whatsoever. The targets come with 4 different target inserts from IDPA to your basic round circle target. The inserts are inserted easily in a slot on the unit, so they can be switched out really easily.

The i-MTTS work by themselves or with other i-MTTS units so you can set up as many as you want. I had a set of 3 targets. The targets have 5 different settings depending on how you want to train:

I loved the ATLP as far as a training tool. I used it a couple times in my concealed carry classes and found it was a great tool. I was able to use it while explaining aspects and fundamentals of point shooting. This really helped the students visually understand what I was explaining, by having a visible laser to show where rounds would be striking a target.

The ATLP seems to be built very solidly and although it is made of plastic, it does not feel cheap at all. It has a good weight and is a good representation of a typical M&P firearm. I liked especially that they decided to weight the magazine to a true filled weight so magazine drills could be more realistic.

And obviously the trigger guard alert is a wonderful training tool that is really driving an important safety rule home for those who may just need to break that very bad habit.

As far as the i-MTTS, I found that the laser strikes were all recorded and didn't have any issues with the laser not being picked up or recognized, and I used it in a fully lit room with not only overhead lights but sunlight as well.

The different modes and targets were great because it allows you to vary your training and keep it interesting. I have seen a lot of laser training tools out there, and I really liked this one because it didn't need anything extra. You simply set up the targets, which literally takes seconds, and you are in business.

No using computers, phones, or syncing anything at all. I especially liked the ability to actually run some drills against my wife and before we knew it we had been shooting for about 30 minutes. Doesn't seem like much, but if we can have fun while training properly and productively, we are more likely to train and train for longer periods of time.

I know for sure that proper dry fire and laser training will undoubtedly make you a more proficient gun handler. Do you NEED to purchase lasers in order to train? Probably not, because dry fire is still extremely useful by itself.

Do you WANT to purchase lasers for training? I would say if you want to spice up your dry fire training, or you would like to break someone's habit of keeping their finger on the trigger, these products from Laser Ammo should be on your Christmas list.

And of course, we sell a bunch of dry fire tools in our store, here.

Chicago, Austin, and the NFAC
Live Fire Training With Drills That Use Less Ammo