Join Our Newsletter
Shop Our Store
MAIN MENUMAIN MENU
By Jacob Paulsen on September 9, 2016 in Law 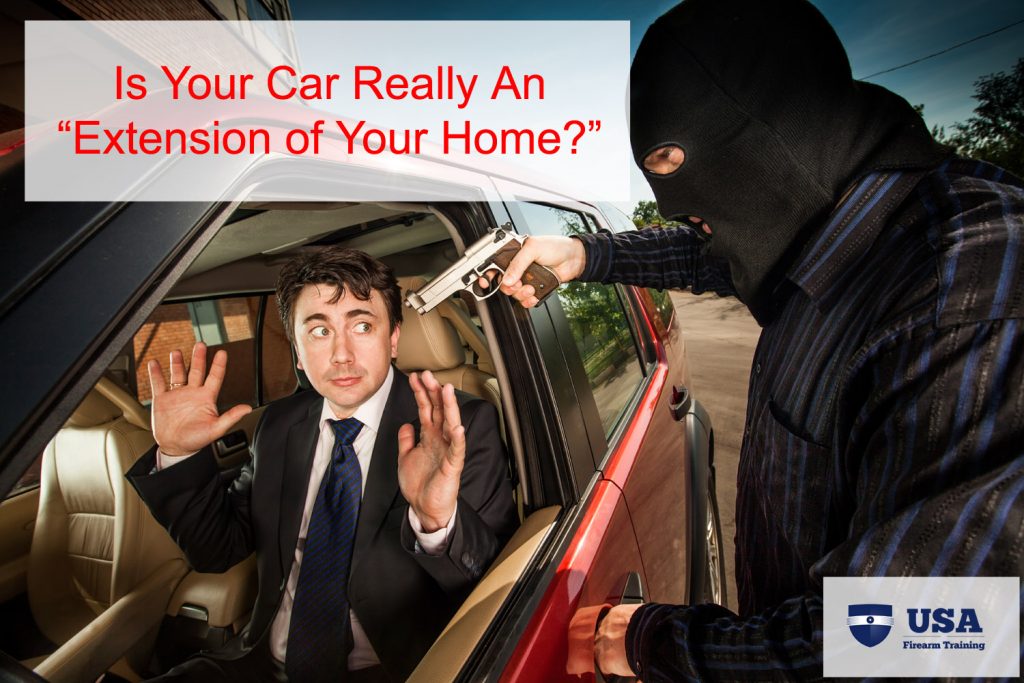 Of all the cliche things we love to throw out in the concealed carry community, there are very few that I think are as wrong or at very least misleading as the idea that your car is an extension of your home.

What Does It Mean to Say Your Car Is An Extension Of Your Home?

When you sit in a class or talk to your buddies at the range and they say to you, “remember that your car is an extension of your home” in what context does this come up in conversation and what are they implying exactly when they use that phrase?

Generally, I have found that we use this phrase to imply that one can use deadly force in their defense in the same way, and under the same circumstances as they could in their home. A lot of states have Castle Doctrine laws, or other laws that lower the legal requirements or thresholds necessary in order to use deadly force to defend oneself or others when in a dwelling or habitation. To say that the car is an extension of the home implies that that same law or those same legal requirements apply to the car.

This is a dangerous phrase to use because it can give any of the following impressions:

For the greater part, these two things are almost never both true and that is why I think as a community we need to stop using the phrase. It implies things, sometimes unintended things, that may or may not be true… and in my experience, they are almost never true.

This is a question of state law. This country doesn't have federal laws that dictate the use of force even though all 50 states have laws primarily based on the old common laws and thus there are some universal themes. Thinking specifically about this question of the car being an extension of the home we need to look more closely, however.

Ultimately the question is this… in your state's laws that determine when the use of deadly force is lawful; does it specify anything about a vehicle? If yes, what does it say? If no, and the word habitation or dwelling is used are there any court precedents or statutes that include vehicles in the definition of a habitation or dwelling?

Let me give you some examples as it relates to the use of deadly force:

Georgia Summary: In Georgia one's vehicle qualifies as a habitation and so for the purposes of using or threatening to use force the same criteria apply and thus one might say in Georgia that your vehicle is an extension of your home and correctly communicate that you can defend your vehicle under the same circumstances and in the same way as your home.

Penal Code 30.01: Habitation means a structure or vehicle that is adapted for the overnight accommodation of persons…

MS 97-3-15.1:  The killing of a human being by the act, procurement or omission of another shall be justifiable in the following cases: (e) When committed by any person in resisting any attempt unlawfully to kill such person or to commit any felony upon him, or upon or in any dwelling, in any occupied vehicle, in any place of business, in any place of employment or in the immediate premises thereof in which such person shall be;

Mississippi Summary: In Mississippi, the car is an extension of the home if you want to call it that but not in the same way that it is in Georgia. While Georgia states you can defend your habitation and that a habitation includes a motor vehicle; Mississippi just lists an occupied vehicle along with a dwelling and two places in which you have a right to use deadly force in your own defense.

I offer the above 3 examples to paint the picture that what the law says matters and making assumptions that your car is an extension of your home is a dangerous assumption to make… even if your instructor told you so… because I've seen instructors in North Carolina, Florida, and Texas all tell their students that is the case when in reality I don't believe it to be true in any of those three states.

What About The Way You Carry or Stage The Firearm?

As mentioned above, in addition to the implication that you can use deadly force in the same circumstances, when you say the vehicle is an extension of the home you are also implying that one can carry and store/stage the firearm in the vehicle in the same ways as the home. When you do your research into your own state's laws you have to consider this too.

It certainly isn't always the case in any state simply because you can take your vehicle places where firearms are prohibited. You can't pick up your house and dump it onto a military base but you can drive your car onto a military base and when you do you cannot have your firearm with you. Thus the laws that determine how and where you can have your firearm in your home cannot ever truly universally be the same in one's vehicle because the vehicle moves and can go places where your rights are otherwise restricted.

Which States Have “Car Extension” Laws?

I have not done the exhaustive research into this topic for each of the 50 states and I'm not aware of any other organization who has. So I will leave you with this thought…. my own sense from the research I have done is that a SMALL number of states have laws that would infer that in that state the vehicle is an extension of the home. More often than not I have been able to DISPROVE this assumption in a lot of states and have only been able to prove it TRUE in less than 5 states.

Here is what I know to be true:

Some my conclusion would be that using the phrase “the car is an extension of the home” is generally unwise as it isn't ever perfectly accurate and even worse has the tendency to imply things that are false.

I welcome comments below and will try to answer them all but a few quick notes that will hopefully answer the most common questions:

*I'm not saying that in most states you don't have the right to defend yourself when in a vehicle. In fact, in most states, you do have that right. I am saying that the required elements for justifiable deadly force in a car are generally different than they are in a home.

*I'm not saying that in most states you can't have a firearm in the car or transport it in the car. In fact, in almost all states there are perfectly legal ways to transport a firearm in a vehicle with or without a permit. Check our legal summaries for state-specific details and consider reading our article about 926A of FOPA.

54 Responses to Is Your Car Really an Extension of Your Home?