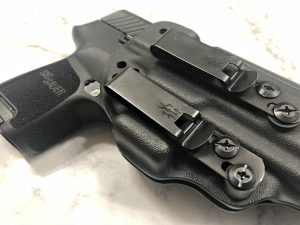 This VELO holster is a perfect option for appendix carry.

I have heard a variation of this story many, many times: “I tried every holster out there, and none had all the features I wanted. So I decided to make my own.” The number of companies making holsters sometimes makes me shrug and say, okay what are you doing that this other company isn't? But I realized that frenzied competition and innovation has led to safer and more comfortable holsters, made from different materials and formed different ways.

Tenicor is a company that has provided firearms and combatives training since 2008 but is fairly new in the holster market. So I chatted with Jeff Mau the founder of Tenicor to get an idea of what drove the company into the holster game. It was refreshing to chat with someone who gave the same answers to questions that I would give. Jeff said:

My goal with Tenicor is to make purpose-built products that are the highest performing in their category. We don't make stuff just to sell it. We make stuff because we believe we can add something that brings value to the performance of the end user.

They have already released outside the waistband (OWB), and a general inside the waistband (IWB) holsters, which have been received very well. Their newest holster is dedicated for appendix inside the waistband (AIWB) carry, and is called the Velo. What initially grabbed my attention about the Velo, was the type of clips they use. Yeah, I know I am always talking about how snap loops are the best. And I am a pretty big fan for obvious reasons, but the clips used by Tenicor in their holsters, address the issues I have with clips in general. And the Velo also has some other features that make it a prime choice for AIWB carry. 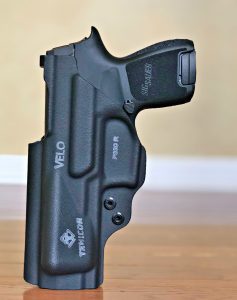 What makes the Velo so good at concealing the firearm is the integrated wedge.

Most holster companies basic plastic or spring steel clips that are ok but susceptible to break or slip off the belt when the gun is drawn, or if you're fighting someone. There are some good plastic clips out there, but ultimately they are still plastic. The clips Tenicor uses on the Velo, are black-oxide coated steel, over the belt, clips that are made by a company called Discreet Carry Concepts. These aren't the typical spring steel clips. These have a little tang that sticks out and catches under the belt.

Because of the design, the clips do not come off the belt unless you want them to. They also have two offset mounting holes that allow for the ride height of the holster to be adjusted. The clips are mounted toward the bottom of the holster, making it possible to tuck your shirt in. In my opinion, it's design and the materials used make this clip one of the best available.

If clips aren't your bag, and you really want to use snap or closed loops, you can order the Velo with those options. And the Velo has a number of holes at the top of the holster that allows for ride height adjustment. Something that may go overlooked, but makes a difference to me is the fact that it accommodates two clips/loops. Two points of attachment work so well at keeping the holster firmly attached and don't allow the gun to shift, that I don't think I could ever go back to a holster that uses one clip.

Another thing you will notice about the Velo is the protrusion near the trigger guard. This is not a mistake, rather it is designed to act like a concealment claw or wing, by pushing butt of the gun in toward the body. It is hard to know exactly how much of a difference this makes because is not removable. I have found that some of the concealment claws can be so aggressive in twisting the gun back that they become uncomfortable. So this certainly doesn't take away anything from the holster even if it didn't work as well as a larger concealment claw. 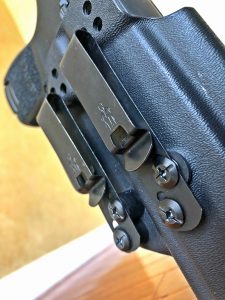 The Clips on the Velo utilize a small tang that latches under the belt, keeping the holster rock solid on the belt.

The wedge that is built into the holster is another element that makes the holster ideal. The wedge is positioned on the inside of the holster toward the muzzle end and works to kick the barrel away from the body and bring the grip into the body. And the wedge has a built-in angle. The angle allows the ‘concealment claw' to function optimally and twist the gun back. Additionally, if it were not angled, only the edge of the wedge would be in contact with your body, and this would cause discomfort.

There are other holsters that incorporate a wedge design. Some are a separate piece that is attached to the holster, and some are molded into the holster like the Velo. I think the Velo may have the most pronounced wedge that I have seen molded into the holster. If you have never used a holster with a wedge, it will literally amaze you with how much of a difference it makes.

You may find it strange that you purchased the holster for your compact Sig P320, and it comes ready to fit not only your compact, but the carry and full-size sizes as well. This is actually done for a specific reason and I realized it a while back after carrying different guns in various holsters. The difference in length between an SC slide and a full size may only be a fraction over an inch in length.

And the added length in most cases, wouldn't cause a concealment or comfortability issue. But what does happen with very small guns like the P365, is the minute slide length does not provide enough leverage to keep the butt of the gun from wanting to ride up and lean forward over the belt.

I have never had an issue where the holster flipped forward, over my belt, but it does shift a little, and I'm not a huge fan of my gun moving even slightly. I found using a pair of soft loops drastically reduces this problem. I imagine this is the reason Tenicor decided to make a holster that fits the C through to the FS model.

On a side note although Tenicor lists that the holster only works with the C-FS models, I was able to use a SC grip module. It worked just fine, even though it has a rounded trigger guard. 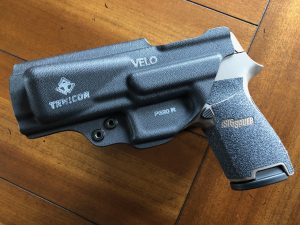 One thing that the Velo lacks is a ‘sidecar' magazine holster. This may not be a drawback for many of you, and for others (like me) who like to carry an additional magazine, you'll have to find one you like from another company. Also, I have only been wearing this holster daily for the last roughly 30 days. I haven't noticed any scratching or damage to any of my belts from the metal tang on the clip.

This was something I wanted to look for when I initially examined the clips because I know many of you have expensive leather and nylon belts. So it seems like that may not be an issue moving forward. Check out my video:

Now the Velo is not cheap. It is going to run you around $95.00 but it is well worth it, considering a cheap Kydex holster is around $50.00 and is likely to end up in a box after some time. I have not yet had a holster that really made me feel that I could conceal a full-size version of the gun. This one concealed so well and was so comfortable that it definitely had me contemplating it.

Unfortunately, I don't have a full-size P320, or I would have done the review with both. God willing, I'll save up enough for one and I will update this article in the future. Tenicor provides a lifetime warranty on their products and they are all made and assembled here in the United States.

All in all, I truly think that if you appendix carry, and have not been able to find a holster you like or the one you have just isn't doing it for you, that you should check out the Velo from Tenicor.