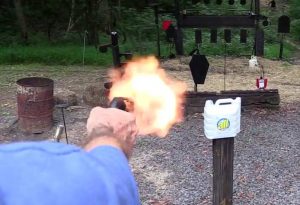 Well, Hickock 45 doesn't mind shooting a revolver chambered in .22WMR. Does that mean it is a viable self-defense round?

I am sure you have heard that ‘the .22 round should never be carried for self-defense ever, under any circumstances', or ‘better to have a .22 when you need it, than not have anything?' What philosophy is right? Should .22's be avoided like a pawn-shop Highpoint? Or is there a case to be made for small caliber, rimfire ammo in a self-defense context.

Let's face it, our ultimate goal if we use our firearm in a self-defense incident, is to stop the threat:

How do our bullets actually stop the threat?

Change of heart: A large number of incidents are stopped without a shot being fired. When the threat sees that the target is armed, they stop. So here, caliber would be irrelevant.

Loss of blood/shock: Wounds to certain organs or the circulatory system cause blood loss. When the attacker loses enough blood, they will go into shock and be unable to continue the attack. Depending on the location of the wound, this could take 20-30 seconds or a few minutes. All things being equal, larger calibers will produce larger wound channels. However, the location of the wound is much more important that the size of the hole in stopping a threat by way of blood loss. This is what drives the ‘placement is the most important' argument.

We can compare the difference in penetration between smaller/larger calibers, or faster/slower calibers in the ability to cause fatal injuries. But even a .22LR can penetrate deep enough to create a wound that could lead to enough loss of blood were shock/death could result. So while smaller caliber/slower moving projectiles will not penetrate as deeply, and may not cause as large of a wound, they still can potentially create injuries that could stop a threat through loss of blood. 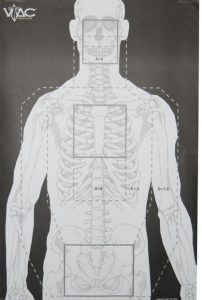 Targets with zones such as the ones found on this VTAC target are driven by human physiology and the likelihood of successfully stopping a threat.

Skeletal/Structural Damage: Projectiles can stop a threat by destroying the skeletal support that allows motion or the ability to continue the attack. For example, damage to bones in the pelvic girdle, which is critical to locomotion can ultimately make it impossible for the attacker to advance. An injury to the arm or hand that would hold a weapon, would make retaining the weapon all but impossible. In this case, caliber is more critical, as small caliber projectiles fired from handguns simply don't carry enough energy do destroy thick bone.

Physical pain: Maybe the most obvious would be just the pain of being shot. These injuries don't have to be in vital areas or even cause fatal or serious injuries. The attacker simply stops because they don't like the pain associated with chunks of lead being blasted into their body. We can point to the fact that motivated/crazed/drugged attackers may not be affected by this pain stimulus. In these incidents, they would have to be stopped by one of the other methods. But in the cases where the attacker is aware of pain, a .22LR would be just as effective at producing pain, as a 9mm.

Central Nervous System Damage:  Automated systems of our bodies like our cardiac (heartbeat) and respiratory (breathing) are controlled by the medulla oblongata. This is a structure located at the base of the brain. Damage to this part of the brain often immediately stops the attacker no matter how motivated they are. The skull is quite good at protecting the brain, so targeting this area is usually through the soft tissue areas between the eyes, covering the nose down to the top of the mouth. This is the triangle you often see on the faces of range targets.

Check out this podcast where Riley and Jacob discuss .22LR for self-defense:

Don't we Want to use the Caliber That Will Give us the Best Chance of Killing the Attacker?

Notice that nowhere did I mention the propensity to cause death as a factor. This is because the likelihood the threat survives our defensive force is not our concern. Our concern is that we stop the threat. If our force leads to the attacker's death or not, is irrelevant. This does not preclude us from targeting areas of the body that are more likely to result in death. But our reasoning for targeting these areas is not to ensure the threat dies. It is to stop the threat as quickly as possible. Often times this means targeting the central nervous system.

When would this be important? How about on an attacker that refuses to stop after being shot several times in the chest and is closing the distance. At a certain point, you may decide that you are losing options as your ammunition depleted or your ability to create distance or escape disappears. Would targeting the brain stem in order to more efficiently and quickly stop the threat be reasonable? I would say yes.

If everything is equal, ammunition produces faster speeds, kinetic energy, and penetration when fired through a gun with a longer barrel. So it is important to look at how these rounds perform in guns like revolvers which typically have very short barrels.

When it comes to rimfire options, your viable options are .22LR and .22WMR ammunition. Both rounds come in a hollow point variety. I only mention this because regardless of the caliber, (HP) hollow points should be used exclusively for home/self-defense as opposed to full metal jacketed (FMJ) rounds. A few years back Hunter Elliot from RangeHot.com did a thorough ballistics test on the .22WMR and here you can see what the results were. Here you can see exactly how the .22WMR faired when compared to a popular .380 self-defense round. When comparing the .22LR to .22WMR head-to-head, all tests point to the fact that the .22WMR is a better choice for personal self-defense.

The ballistics of the .22WMR are actually not terrible.

To say .22LR semi-autos like the Ruger SR22 are finicky, would be an absurd understatement. When using your run of the mill .22LR plinking ammo, you are lucky to get through a magazine without a malfunction. Luckily companies like Federal, Hornady, Magnum etc. make reliable JHP ammunition in .22WMR. So the issue with ammunition induced malfunctions is reduced substantially. 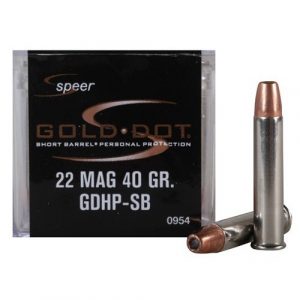 The reliability of .22 WMR JHP ammo is much better than the unreliable, bulk .22LR ammo commonly used for plinking.

Another thing to consider is the capacity and controllability of the gun with a specific cartridge. Comparatively, a smaller round is going to give you a higher capacity, and this is always welcome. Additionally, the .22LR and .22WMR cartridges produce such light recoil that even the most recoil-sensitive shooters would easily be able to control the gun and hammer follow-up shots in an accurate fashion.

What Options Are There?

Many think that the only guns that are chambered in .22WMR are minuscule, single-shot revolvers. If that were the case, I wouldn't even bother writing this article because these guns are a terrible self-defense option. But there are many viable options if you choose to use the .22WMR for self-defense. Ruger, Smith & Wesson, Charter Arms, and Taurus all make 1.8″ barrel, J-frame type revolvers chambered in .22WMR. AMT (not around anymore) Kel-Tec and Armscor produce semi-autos chambered in .22WMR. If you open your options to the .22LR variety there are even more gun models to choose from. But again, because the .22WMR is a more viable option for self-defense when compared to .22LR I focus more on these guns.

.22WMR, auto-loading handguns like the Kel-Tec PMR30 could be a viable self-defense choice.

What is the Verdict on Small Caliber, Rim Fired Ammo?

In my opinion, you are still unlikely to get me to switch from 9mm or .40 to a .22WMR for my self-defense gun. And I am not suggesting that the .22WMR is even close to being considered the best self-defense round. But, in doing some research I was surprised at the performance of the .22WMR even out of the snubby revolvers. I do occasionally toss a 5-shot Ruger LCR .38spcl in my cargo pocket from time to time.

Being that the round performs similarly to the .38 special, and using a .22WMR gives me one more round, makes me wonder if it makes sense seriously consider the LCR chambered in .22WMR. I can tell you that while I may not switch to one for self-defense if you carry one of the above-mentioned guns don't feel completely outgunned, you could probably do much worse.

What are your thoughts? Would you ever consider carrying a small caliber rim-fire gun for self-defense? Let us know in the comments below.

Episode 248: Draw Fast…or Draw Slow??
How To Find Out If Your Favorite Online Retailer Uses The Anti-Gun Shopify