What is the Laser Academy from MantisX?

Mantis Laser Academy is a laser, shot recording smartphone application with built-in training modes. The app is from the same well-known company that produced the Mantis X device!

The different modes allow you to keep dry fire practice fresh and challenging. I have used it for roughly three weeks now. I find navigating the application to be straightforward, and easy to set up. The different modes are useful and facilitate a multitude of different training options. Overall it is an incredibly valuable tool to help anyone work on their shooting skills. 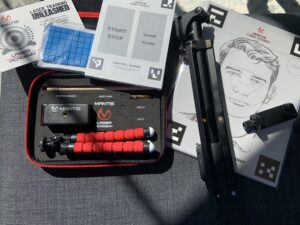 Why Dry Fire With Lasers?

The benefits of dry fire practice cannot be overstated. That is probably why we have written many articles on the subject.

However, using lasers for dryfire is not popular, but it should be. One of the reasons may be the high price tag of laser training guns like my favorite, SIRT Pistol from Next Level Training. The SIRT is a fantastic tool that I use regularly. But there are other ways to train with lasers, that aren't so expensive. For example, this laser training cartridge will run you about the same as 200 rounds of 9mm training ammo, but give you around 3000 “shots” before having to change out the batteries. In fact, the Mantis Laser Academy Kit includes a device just like the one mentioned.

Lasers allow you to get some visual feedback during your dry-fire training. Pairing your laser training device with shot recording software like the Laser Academy allows you to track metrics like reaction time and accuracy. This would be impossible to see otherwise. An added benefit of training with lasers is that is fun. 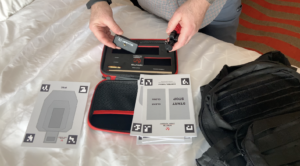 You can take Laser academy with you when traveling.

Features of the Laser Academy Application

The free version of the app comes with three different training modes:

In addition to the 4 free training modes,

you can unlock 10 more

by upgrading within the app, or by purchasing one of the complete kits on their website.

I'll explain what is included in the kits in a bit. Here are the additional training modes: 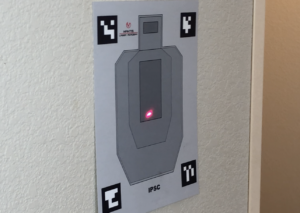 Laser Academy ‘smart targets' are auto recognized by the software for scoring and drill purposes.

There are more than enough training modes to keep things interesting and challenging. Additionally, the in-app settings allow you to change things like par time, recovery time in between reps, and the number of reps per session. A setting that may go unnoticed to many users is the ballistic offset. This is going to be important if you use a red dot optic on your handgun. Because the laser is aligned to the barrel and not your optic you may have an aiming offset issue when using a small target at close distances. This setting allows you to adjust it so the application takes this offset into consideration.

If you happen to have a Mantis user account for your Mantis X device, you can use the same credentials to log in to your Laser Academy application. This allows you to track all your Mantis dryfire training information in one place.

What Gear is Included With the Mantis Laser Academy Kit?

To use Laser Academy, at a bare minimum you need a smartphone, and some sort of laser emitting device, like a SIRT pistol or a laser cartridge mentioned above. So you may already have gear that will get you started. If you are starting from scratch, it makes sense to look at buying one of the complete kits from Mantis. That way you won't be rigging some setup that doesn't work perfectly or isn't easily set up and taken down.

The Standard Kit adds the following items to what is already included with the Portable Kit:

There are a lot of different types of targets that come in the kits. These include IDPA, Dot Torture, IPSC, B27, and a variety of hostage and accuracy targets. All of them are printed on hard, durable cardstock. You can also purchase the targets separately as a set in the Mantis online store. For the ultra frugal approach, you can download a PDF file from the Mantis website and print out the targets you want.

Mantis calls them ‘smart targets' because they have some codes printed on the corners. These codes are read by the application so that the program can recognize what type of target it is and score it appropriately. Some of the targets also have a zone on them called “control.” When you shoot a laser into this area it will start or stop the drill, or end training. This gives some convenient ‘hands-free' control of the app. For the targets without this ‘control zone,' you can simply use an included special control target that the software will recognize.

Additionally, there are targets measuring 5″ x 7″ which are roughly 1/5 scale. These are nice because they fit inside of the travel case.

As you can see, Laser Academy comes with everything you need to make dryfire enjoyable and productive. The application is also simple to set up. In fact, it only takes a few seconds and you're up and running.

To be honest I expected that the smartphone application would be simple and intuitive to set up. Mantis is a company that prides itself on routinely updating its applications to be bug-free, rich in features, and easy to use.

For a few days, I wanted to work on my draw speed. My cold start time, draw to first shot was averaging around 1.3 seconds at IPSC target A zone at 10-yard equivalent. I spent about 20 minutes using Laser Academy for 3 consecutive days. I used the “compressed surprise break” mode so I could isolate the time I took to present the gun, pick up my red dot, and get an acceptable hit. I also used the “holster draw” mode while working on my draw speed. I got some really good times in the .80s and some flubs in the close to 2s.

My goal at the beginning was to run a consecutive string of 5 ‘draw to first shot' times all at 1.0 seconds or less. On day 3 I was able to do just that. In fact, my average over about 30 draws was around 1 second that day. Now 0.3 seconds may not seem like a lot, and it probably isn't going to be the difference-maker in a use of force. However, being faster and maintaining accuracy can never hurt performance. Additionally, more good reps lead to fewer flubs overall. It also means more automation of the drawing process. So I can use less brain power focusing on my draw and initial shots, and more time on analyzing all the valuable information of my surroundings.

As a side note, if you want a faster draw you need to practice it. This course we put together is fantastic, and you can use the principles with Laser Academy to make your draw more consistent and efficient.

There are a lot of different options when it comes to shot recording software for dry fire practice. Laser Academy doesn't lack any features when compared to similar products and is affordable. I like the fact that the kit comes with everything you need, except for the phone and gun of course. Considering the cost of ammunition, an investment into something like the Mantis Laser Academy is money well spent.