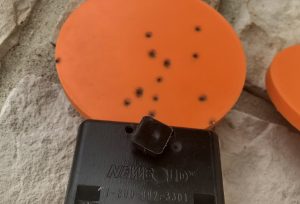 The polymer material that makes up the target and base is self-healing and allows the bullet to pass through.

While at the USCCA Expo this year, I paid a visit to the Newbold Targets booth. The booth was incredibly busy the entire Expo, but I was able to make my way over to some really cool targets that I had to try out and review for you all.

The reason why I was drawn to these targets is that I love shooting steel targets. The instant feedback that comes when the target drops or you hear the ‘ping' from the round impacting is beneficial. The reason it helps is that when you receive instant feedback of a good hit, your mind can take a snapshot of what fundamentals you were applying as you pulled the trigger, making it easier to reinforce good technique.

As great as steel targets are, there are some inherent drawbacks that come with them. These targets are made of a shoot-through, self-healing material that eliminates many of the drawbacks associated with steel. 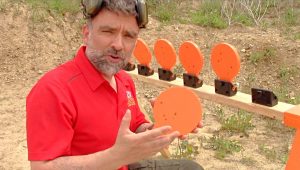 These polymer, Pass-Through, Self-Healing targets are great because they provide immediate feedback.

The targets are made for various applications, and each series comes in many different colors, sizes, and shapes. Each series is designed to react differently to bullet strikes. 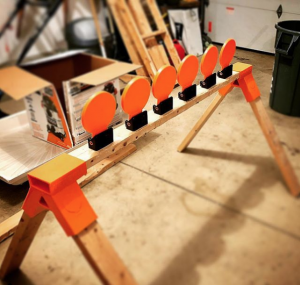 The targets I used in the evaluation came from the Plate Rack Kit that Newbold offers. The kit comes with (6) 6″ K-D Series circle targets, (6) K-D Series target bases, (2) Alpha Stand brackets, and the wood screws needed to fasten the target bases to a 2×4.

I will let you know, I absolutely despise unnecessary product packaging. So often you get a product only to be annoyed with plastic bags, and heat formed clam shell packaging that is a pain to open. Plus all this packaging gets thrown away, so why fill up the landfills with stuff we don't need to? So I really appreciate the ‘Easy Peasy Packaging' concept that Newbold uses.

They don't spend time and money on excessive packaging. Just toss the product in the box, slap a fancy company sticker on it, and ship it to the customer. What this means is less hassle, lower prices for the consumer and less garbage to bury in a landfill. For example, my entire plate rack system, minus the 2×4's was shipped to me in a 12″x12″x12″ box that weighed a whopping 10 lbs. 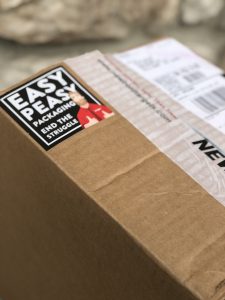 I grabbed a few 2×4's I had in my garage and screwed each of the 6 target bases to a board around 6 feet long. The targets and Alpha Stands were left in the small box. Because it is so lightweight, I was able to put all of it in the trunk of my Honda Accord. Once I got out to the range, I was able to put it all together by myself literally in less than 5 minutes. All you have to do is slide 4 shorter 2×4's of equal length into the ‘leg' slots of the stands and then slide the cross member that holds the bases into the remaining slot on the alpha stand.

Depending on the distance you are shooting from, and the caliber of round, you will have to set the sensitivity of the targets. This is done by simply turning the knob in the target base. The more the target is tilted back the more sensitive to strikes it will be. I used .22LR through 45ACP and the target fell over like it was supposed to. I did need to tune up the targets slightly to allow the .22LR round to knock it over, but once I did that, all functioned perfectly.

I used the plate rack in my recent concealed carry class. The students competed against one another in a friendly competition. All of the students thought it was fun, and several remarked how they liked shooting the plates and getting the instant feedback. I put several dozen rounds through the targets myself from various distances. I did notice that when I got closer while shooting .45 the target had a tendency to bounce back up. This can be solved by adjusting the sensitivity to be less sensitive. 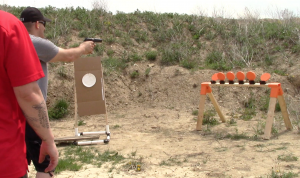 So the lesson is, depending on the caliber and distance, you need to adjust the targets so they function how you want them to, no different than steel.

One thing I noticed is that because the targets are lighter than steel they are subject to strong winds. This has to do a lot with the fact that there were 15 mph winds and really no berms to buffer any of that direct wind. Once again, adjusting the sensitivity and changing the angle of the targets in relation to the wind helped. However, mother nature could not be completely defeated. This probably won't be the case for you, but I wanted to comment on it. 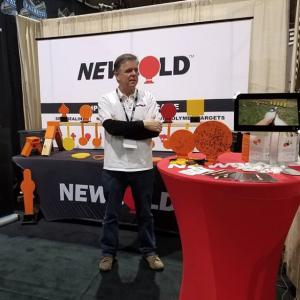 Not only is the quality and versatility of the different target lines is great, but the customer service and people of Newbold Targets are amazing!

I really like these targets and think they are better than shooting paper and a great alternative to steel. I imagine that in the not so distant future, Newbold will come up with a way to run these plates as a dueling tree. If the system could get better, having a plate rack and dueling tree would be it.

Paper, steel, and polymer targets all have their place, their application as well as pros and cons. Whether you want to set up some plates to compete on, some Pepper-Poppers for human silhouette shooting, or have some fun with the L Series and Hang Tuff targets, you really can customize your range exactly how you want it. I am definitely going to be implementing these targets in my training classes, and practice sessions.

You can find Newbold Targets here.

Favorite Drills: 700 Point Aggregate, AKA The Humbler
How to Avoid a “Justified Shooting” over a Parking Space