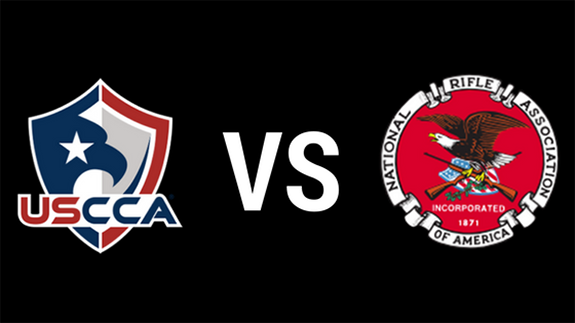 After stating concerns over USCCA's “programs,” the NRA rescinded the United States Concealed Carry Association's invite to the NRA's Annual meetings taking place this week in Atlanta, Georgia. I know, old news, right? What if I told you that this isn't the first time something like this has happened?

A little known fact about me, is that I used to work for a company called US Law Shield. It is essentially a membership program that mimics a firearms insurance service. They also offer up access to attorneys and have gun law classes at uber cheap prices. It’s a good service, and I’m still a member. It's sort of like USCCA, but is different in that it isn't exactly “insurance.”

That part isn't incredibly important, but it'll all make sense in a moment  …

Being that I live in Pennsylvania, and the NRA’s Great American Outdoor Show is also in Pennsylvania, one year we figured that we could potentially teach a class at the show in addition to setting up a booth. There would have been a benefit to everyone involved. We would get some new members and give them the benefit of having access to a practicing firearms attorney, while the NRA would have gotten more educated gun owners into the firearms world.

We thought for sure it was a win/win, but were told that we could not teach any classes at the NRA event, and, as far as I can remember, weren't given a reason why.

They allowed us to have a booth, but we were limited in what we were allowed to do. Keep in mind that US Law Shield, with the help from the McShane Firm, was suing Harrisburg for their shoddy and unconstitutional gun laws at the same time the NRA was suing several other cities in the commonwealth.

Our attorneys were in collaboration with theirs, so we thought it strange they wouldn't allow us to teach gun law classes. We found out later on that they were teaching classes, very similar to what we wanted to do, and that they likely did not want to have any competition.

It seems as though the same thing is happening with USCCA. They've been disinvited, and now the reason why is evident. NRA just announced a new program called Carry Guard, which will have extensive training, an insurance-based program should you ever need your weapon in self-defense, and even a new print magazine that'll look similar to USCCA's Concealed Carry.

It sure does seem that it's less about the their “programs” and more about them just not wanting the extra competition around.

While I don’t like the fact that they do things like this, and it's clearly not the first time they've done so, it's their choice. After all, it is their show and I suppose they can do whatever they want with it.

Their name is on the event, the marketing material, and the money that’s paying for it, and they’re therefore allowed to have whomever they want to attend even though the correct attitude from NRA should be, “ya know what? We're all in this together. What's a little competition between friends when we are all better for it in the long run?”

Gun owners all over the country and the Second Amendment as a whole benefit from competition like this. Here's an example: Can you imagine how expensive guns would be if there was only one company making them? We see it with ammunition all the time. If only one ammo company makes a specific cartridge, they can charge whatever they want for it until someone else steps up and begins production, and, ultimately, driving the price down.


While I believe that it is the NRA's show and they can invite whomever they want, I also think that it helps everyone out if the USCCA is able to bring new people into gun ownership. Wouldn't the NRA be thrilled about that? After all, there are many folks, gun owners and not, who despise the NRA and may never get involved simply because when they hear the word “gun” their mind drifts to the gun-lobbying NRA.

Right or wrong, some people just view that organization as the evil.

It's my opinion that we are all better off if one hand washes the other. Or, if I wash your back so you can wash mine. The NRA should not view anyone as their competition, but as a helping hand offering more options to get people involved. The true competition are those who would strip us of our gun rights and repeal the Second Amendment. Our competition should not be each other, but the anti-gunners.

What's your take? Do you support the NRA's decision? Do you feel USCCA's pain? Let us know in the comments what you think, and if you feel like there's any way for them to come together.