Join Our Newsletter
Shop Our Store
MAIN MENUMAIN MENU
By Matthew Maruster on November 18, 2021 in Gear

The Blackbeard AR-15 laser training device is relatively new to the market. However, it's already dominating the competitive products in the space with its impressive features and performance. 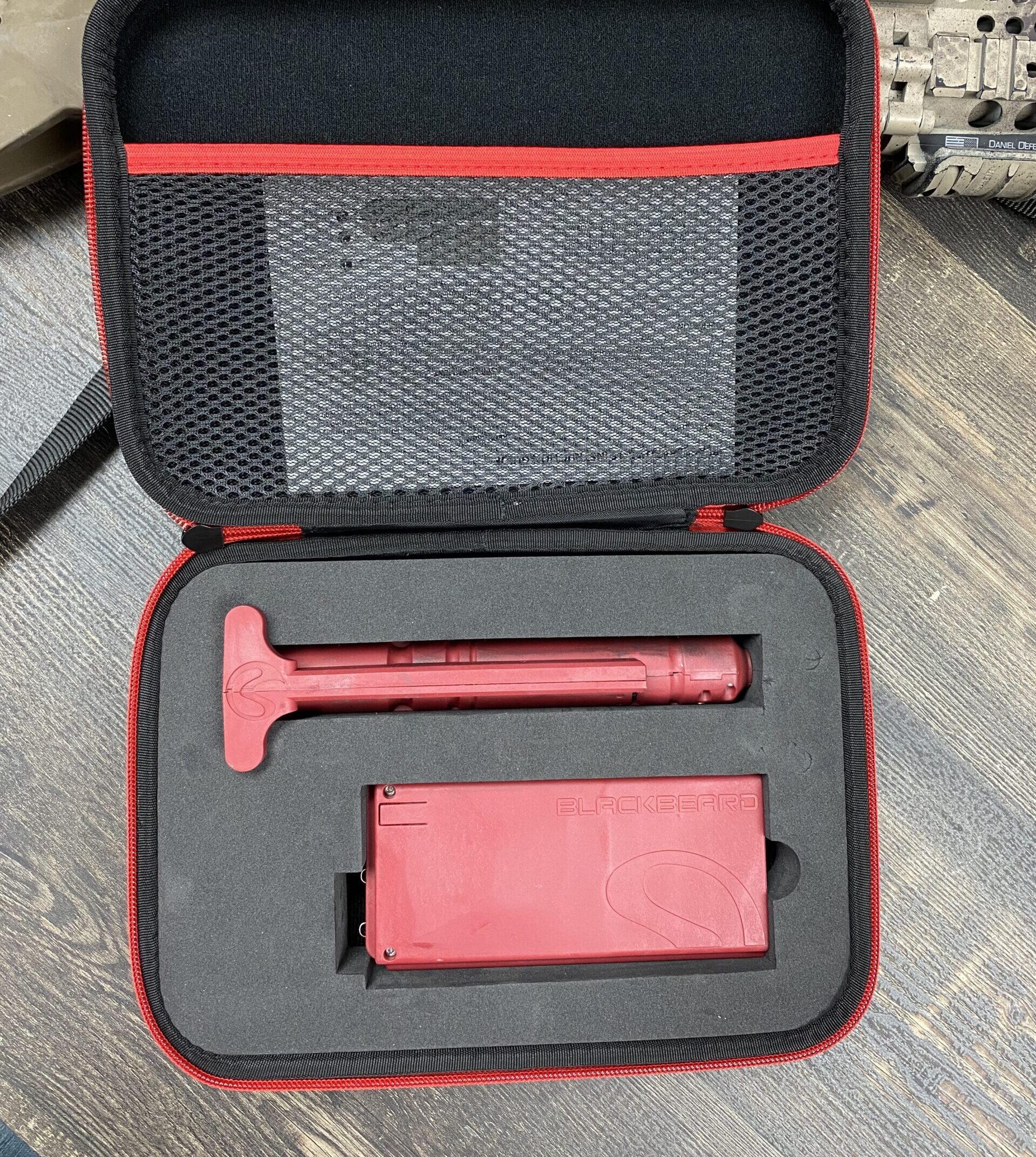 For those unfamiliar with how laser cartridges and laser training guns work in dryfire practice, I've included a link to the review of the Mantis Laser Academy. Laser Academy is an application-based shot recording program that unlocks a whole new arena of dryfire drills and metrics. Using a laser cartridge like this from ReadyUpGear, enables you to use your actual handgun in practice. I have added the video portion to the end of the post.

Laser Training with Your AR-15:

However, before Blackbeard, dry fire laser training products for use in ARs were not user-friendly. One, in particular, requires a time-consuming process of adjusting the laser, so strikes are aligned with the muzzle. You had to repeat the process any time you removed and reinstalled the device. Once set up, it was okay, but it was hardly something you could get up and running in seconds. Plus, the device substantially changed the feeling of the trigger press.

As much as I love shooting ARs, I enlisted the help of a good buddy Daniel to help me evaluate Blackbeard. After he and I used it for some time, Daniel let his coworkers at HRT Tactical Gear get their hands on it. They also put the Blackbeard through a thorough evaluation. 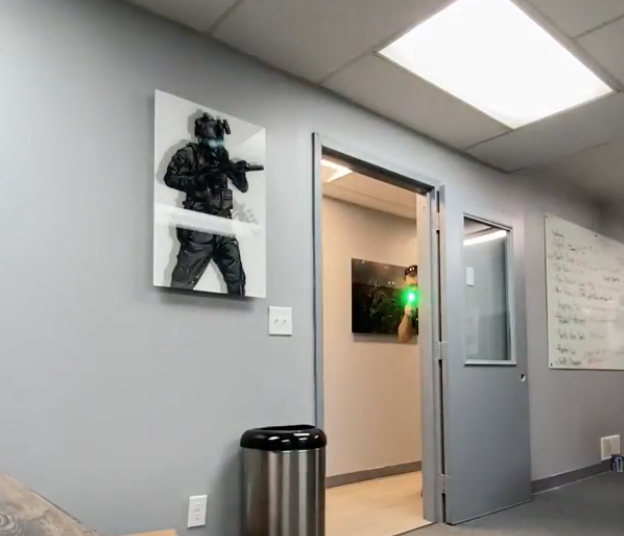 Evaluating the Blackbeard from Mantis:

In total, we fired the Blackbeard that Mantis sent for evaluation in excess of 10,000 times. We used it in several different AR builds, and it worked in both direct impingement and piston-driven ARs.

There are a few things that make Blackbeard different.

First, it is exceptionally easy to install. Simply remove your bolt carrier group and charging handle. Then slide in the single-piece Blackbeard. You can make windage and elevation adjustments on the device, but I found it nearly dead straight out of the box. Once you dial in the laser, you don't have to adjust it, even after removing and reinstalling the device. 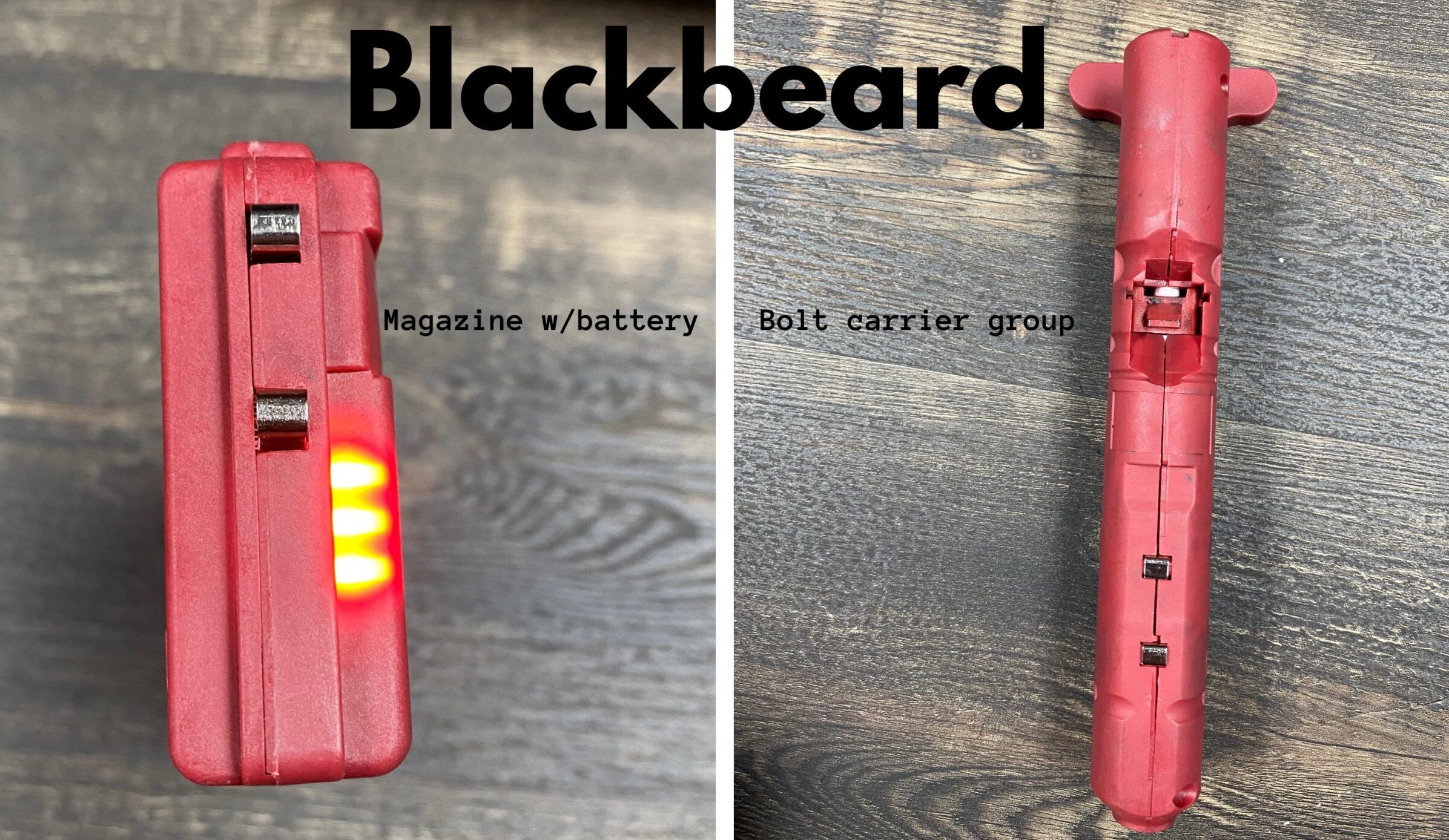 Each trigger press, break reset and weight, feel surprisingly recognizable to your typical trigger press. This similarity is because you're using your trigger and lower internal parts.

The battery gets charged with a standard micro USB cable. While the battery came with some charge, it requires a good charge overnight to hold enough juice for extended practice. Once it's fully charged, you'll get several thousand trigger presses before the battery needs a charge. The magazine has several LED lights that indicate how much of a charge is left.

As fantastic as the battery life and realistic trigger press are, there is a pretty amazing aspect of the Blackbeard. The device resets the trigger extremely fast. So fast, it can handle 10 individual trigger presses in a single second. I can't shoot splits that quickly, so I'll have to take Mantis' word on the ability. I can say, however, that when the magazine has a good charge, you won't overrun the trigger.

My unit has a green laser, which I find is suitable for my needs. If you have an optic on your rifle, you may want to consider a laser of a different color. If you use Night Optic Devices (NODs), you may benefit from the Blackbeard with the infrared laser.

Some Benefits of the Blackbeard system:

Another benefit is that the user can actually see and understand the mechanical offset between the sights and the barrel. This offset becomes more pronounced with optics that sit considerably higher than the bore. If you ignore this offset, you'll see your sights on the target and the laser striking the cover. Better to learn and understand this principle through dryfire rather than sending rounds through a barricade on the range.

Coupling the Blackbeard with MantisX:

I didn't use the Blackbeard with MantisX, but you absolutely can. If you're not familiar with the MantisX device, it is a revolutionary dry and live-fire tool that experts recognize as the best device in this category. The device attaches to the gun and records all movement pre, during, and after the trigger press. Then, MantisX takes that data and puts it into metrics that aid the shooter in diagnosing issues with their fundamentals.

Ammunition cost savings is only one benefit of the Blackbeard. When paired up with software like Mantis Academy, you're able to get instant feedback when you train with your gun in your home. Set up targets in your home and simulate the actual shots a home invader may force you to make.

I wanted to note that you can overrun the trigger when the battery has a low charge. You can tell when the battery is low by checking the LEDs or just by feeling. Once the battery is exceptionally low, the reset will slow down slightly. Then, just charge it up for a bit, and you're back in business.

There are applications where the ability to turn off the laser would be appreciated. I could certainly put a piece of tape over the muzzle, but an off/on switch would be nice to see in the future.

As mentioned above, the Blackbeard got a healthy workout. I admit that initially, I feared the polymer mechanism that resets the trigger might wear out. However, at this point, I can confidently say that my fears were unfounded.

Depending on the specific laser you want, you will spend 200-250 dollars for a Blackbeard. However, if you consider the cost of ammunition, the Blackbeard is likely to pay for itself within the first few times you use the device.

With Christmas coming soon, this may be a winning gift for the AR owner in your life. You can check out this post where I list some items that would look fantastic under your Christmas tree.

S4E12: JUSTIFIED SAVES – Be Careful What You Say to the Media
Who is Attorney Andrew Branca? Does His Opinion Matter?

3 Responses to Own an AR-15? Check out the Blackbeard from Mantis