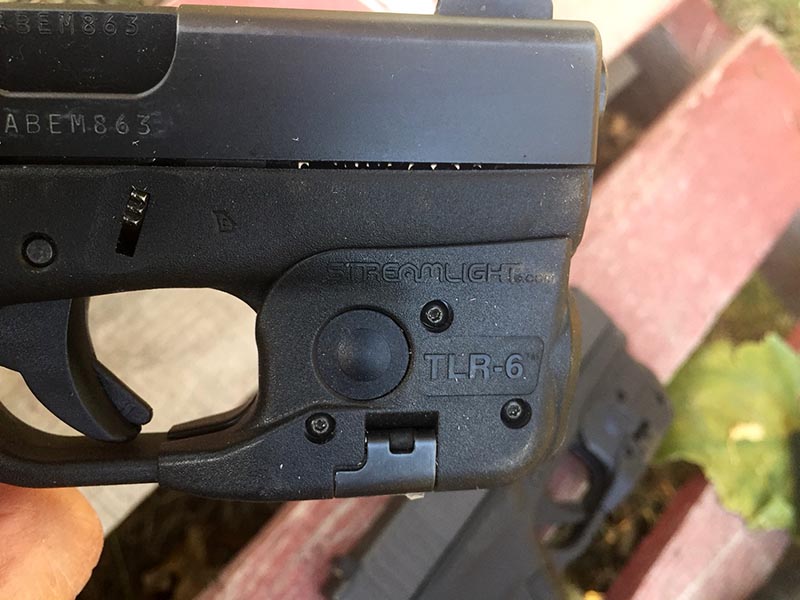 This Streamlight laser/light can be activated by the support hand thumb.

Laser attachments are often a selling point for a new gun, as well as a pricey add-on that many people choose. Is a laser really superior to traditional sights including night sights? In general, I don’t think so. However, there are occasions and people for whom a laser is beneficial. There are also some caveats and flat-out downsides. This article examines those, hopefully dispelling some myths about what laser sights can do.

What is a laser sight?

A laser sight is an accessory on the handgun which sends an intense beam of light straight ahead from where it’s mounted. Usually that light is red, as is the case with the two brands of laser I own, Streamlight, LaserMax, as well as some of the products made by Crimson Trace. Ironically for Crimson Trace, green lasers came onto the scene later, and much of their product line is now green. Viridian is another company that uses green lasers, which are more visible to human eyes in the daytime.

Lasers require a battery power source, which is integrated into the body of the device. Some require a conscious effort to turn on. Some are made so that the act of gripping the handgun turns the laser on, if it’s set to that setting and assuming the battery is working. And that leads us to the first consideration of whether a laser is right for you.

This article is not an analysis of the laser-sighting products on the market that are made for dry fire. This is strictly about lasers being used on real, loaded handguns used on the range and for self-protection.

For every pro, there’s a con

Battery power is a blessing and a curse. A good laser sight cannot be accidentally turned on inside the holster or carrying case. My own Lasermax device on my Ruger LCR, which is no longer sold as a package by Ruger, burned out two batteries from simply having the toggle switch activated when the gun was inside a padded case, placed inside a range bag full of lumpy objects. This bottom-of-the-line device offers little aside from being a bad example.

Also unsettling was some battery leakage inside my Streamlight TLR-6, after it had been stored in the safe while I wasn’t using my Glock 42 for months. This light/laser combination is a better performer in every way than the Lasermax, but still requires conscious ignition. There’s not much time to think about pressing buttons in most self-defense scenarios that involve a gun.

But in defense of these devices over the grip-and-go type that generally have better-performing batteries, the downside to not being able to choose when your laser is on is that, in darkness, a laser can signal your location to a potential threat. And holding your gun in such a manner that the laser tuns off until you can use is neither safe nor tactically sound!

Safety can be a concern depending on where the laser is mounted. I’ll not name brands here, but a student recently showed off a brand new, quite expensive 1911, factory-outfitted with a very nice laser. I kept having to correct her bridging of the trigger finger over the trigger guard. “But it won’t stay there,” she said.

It was then I saw the laser body is mounted to the frame right above the trigger, where the trigger finger should be planted unless shooting is in progress. She was right—the laser was keeping her from being truly safe. It’s my advice to avoid any gadget, no matter how cool or expensive, that interferes with safe handling of the gun.

Aiming is obviously the entire point of laser use. There are instances when I think it’s an ideal sidekick. Those can include:

Limitations of the laser, other than the need to pay attention to battery life, should be understood by the person who chooses one. The most common of these is visibility. Bright sunlight, smoky environments, and distance are the enemies of laser-dependent aiming. My inexpensive Lasermax’s beam is invisible beyond about three yards in bright daylight. Green beams are less vulnerable to washout by light, but add sufficient distance or haze and they, too, will become invisible. 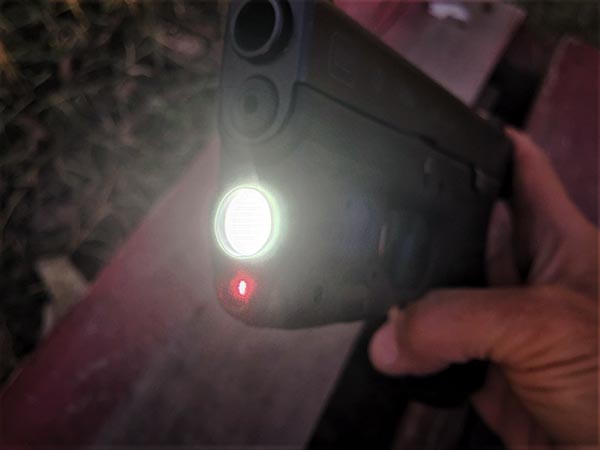 The Streamlight TLR-6 can both illuminate and aim at a target.

Accuracy is an often-assumed and mostly misunderstood aspect of laser use. At what distance is your laser zeroed? Did you ever think that maybe you should check its zero and do you know how to adjust it?  In general, lasers are an accurate aiming device. However, zeroing affects their performance in the same manner it does the scope on your rifle.

Speaking of precision shots, lasers are great at making you notice how much your body moves despite your best attempts to control it! Unless you practice a lot with your laser, your attempts to be accurate may frustrate more than please you as compared to shooting with traditional sights. That darn dot will jump around as if it’s trying to get away from your exact point of aim. Try it and see.

And now we’ve meandered to other kinds of sights being used on the same gun. It’s a safe assumption that your laser-outfitted gun also has front and rear sights. Use the laser in your range practice instead of your sights, and you’ll find using the sights a tough adjustment. Time invested learning to focus on your front sight can be undone when using the laser a lot, as it forces you to focus on the target.

That’s why, earlier, I said that folks who use a red dot sight are among the best candidates for laser use. Their brains are conditioned to focusing on the target.

There’s another myth to bust when it comes to lasers: target identification. Lasers are often thought of as an aid to shoot in the dark, when the uninvited guest cracks open the door of your bedroom at 2 AM. Here’s the thing: a laser cannot help you identify what you’re aiming at. You must have a source of light to illuminate the potential threat and identify it as something deserving of ballistic resistance.

There’s a certain attitude I encounter among a majority of people who bring laser-outfitted guns to concealed carry class. Their reasoning goes something like “I don’t like to/don’t have time to practice, so I will just use the laser if I ever need to shoot.” The people who say this are predictably inept and often unsafe in their gun handling.

That’s not acceptable if you’re carrying a gun in public or storing it for use in a residence where other people are put at risk from your negligence. Nobody expects you to become a gun nut like those of us who write for gun blogs, but if you’re going to have a gun for self-protection, learn and practice its safe use often enough to have basic competence with it.

Lasers are costly gadgets that can be advantageous in a few circumstances. They are not a substitute for learning the fundamentals of marksmanship or for practicing safe gun handling. I don’t hate them, but I do believe it’s folly to consider them an important component of your shooting gear and skill set.